Your Questions on Ebola, Answered 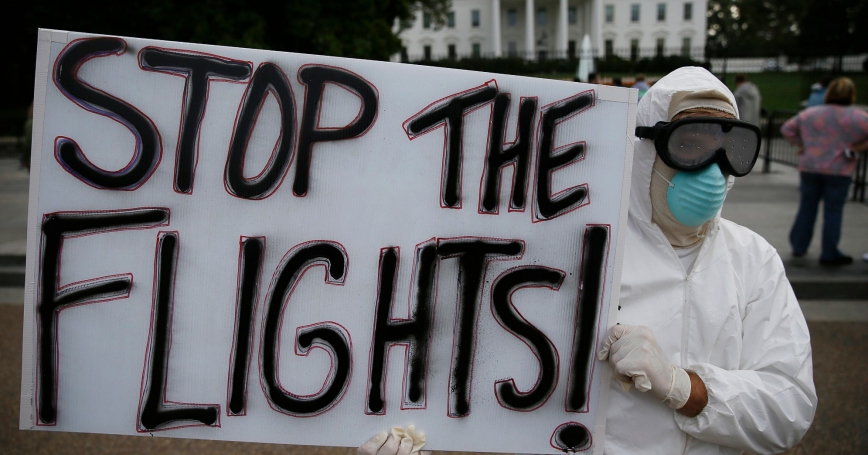 A protestor demonstrates in favor of a travel ban to stop the spread of Ebola, in front of the White House, October 16, 2014

The Ebola outbreak that's taken thousands of lives in West Africa has also touched Spain, Germany, Norway, France, the United Kingdom, and the United States, illustrating the truly global nature of infectious disease. Now, authorities from all over the world are working to contain the spread of panic and confusion—as well as the deadly disease itself.

RAND's Melinda Moore, a public health physician and senior researcher, has spent most of the last 35 years addressing global public health issues, including 20 years at the CDC and five years working for the Secretary of Health and Human Services.

Last Friday, Moore hosted an “Ask Me Anything” session on Reddit to answer your questions about Ebola. Here's an edited selection:

There's been an uproar about whether the United States should cancel flights from infected areas. Would that help in any way?

Moore: The United States should consider current and potential interventions in the following terms:

The travel ban doesn't score well on the details of how it would be carried out or its potential negative consequences, such as the possibility infected people will respond by avoiding detection, to everyone's detriment.

It might be better to focus on scaling up and hunkering down on the interventions that are mostly in place now, domestically and in Africa. We're a global community. Problems are sometimes global, but so are the solutions.

How can the West and others limit the international spread of the outbreak?

Moore: We need a package of interventions to stop the outbreak in Africa, limit international spread of disease, and protect Americans. These are interlinked. The United States is already implementing

What if there was an Ebola pandemic?

Moore: That's a very sobering question—one I hope we won't have to face. We really need to stem the current epidemic before it reaches pandemic proportions.

We need to make sure there's enough medical care to take care of people in Liberia, Sierra Leone, and Guinea. We should also make sure U.S. systems step up their plans, protocols, training, and drills—i.e., preparedness—so Americans can be confident of good medical care at any hospital that may need to provide Ebola care.

Why does the CDC move infected patients? Even when the risk is low, it's still risk.

Moore: Though no one has said as much, this may be an interim measure until more hospitals are fully prepared to manage an Ebola patient safely and effectively.

In the case of the two nurses moved from the Dallas hospital, I believe staffing levels were compromised because so many medical personnel who cared for Thomas Duncan are under quarantine.

I think it's safe to say there've been failures in hospital protocol in treating Ebola patients. What are these and how can they be corrected?

Moore: We need to learn from both successes and failures. Certainly, the experiences in Dallas have offered important opportunities on the second front. I believe we're making progress.

For example, it sounds like the CDC is reconsidering tweaking its recommendations for personal protection equipment for health workers, as well as modalities for protocol training. They're also reconsidering the temperature threshold for screening and quarantine. (Note: The CDC updated its PPE recommendations two days after Moore's AMA.)

Ebola vs. the Flu

What other illnesses should we be more concerned about?

Moore: We're entering flu season. Unlike Ebola, flu is spread through airborne transmission, and even asymptomatic people can spread the virus without knowing it. But we know what to do to minimize the flu's impact:

How much does a flu shot reduce my odds of getting the flu? How many flu cases happen each year?

Moore: Vaccines are just about the most cost-effective intervention in public health. Flu vaccines are typically at least 90 percent efficacious at preventing infection altogether, and certainly in limiting the severity of flu infection.

Every year, the flu infects hundreds of thousands, if not millions of people. In the United States, the flu kills between 3,000 and 49,000 people annually, depending on how severe the outbreak is.

Unfortunately, many adults choose not to get vaccinated, for a number of reasons. Have you all gotten your flu shot yet?

Ebola and the American Public

How overblown are Americans' reactions to Ebola? What can I do as a citizen to be aware?

Moore: Americans (and everyone else) need to understand how Ebola is and is not spread. That way, reactions will not be overblown. Stay tuned to cdc.gov.

Apart from hand-washing, what else will help us stay healthy?

Moore: In the broadest sense, we need to have healthy lifestyles in terms of diet, exercise, and risk behaviors. Regarding infectious diseases, hand-washing always makes sense, particularly as we enter flu season. Good personal hygiene is a good rule of thumb to protect against any infectious disease.