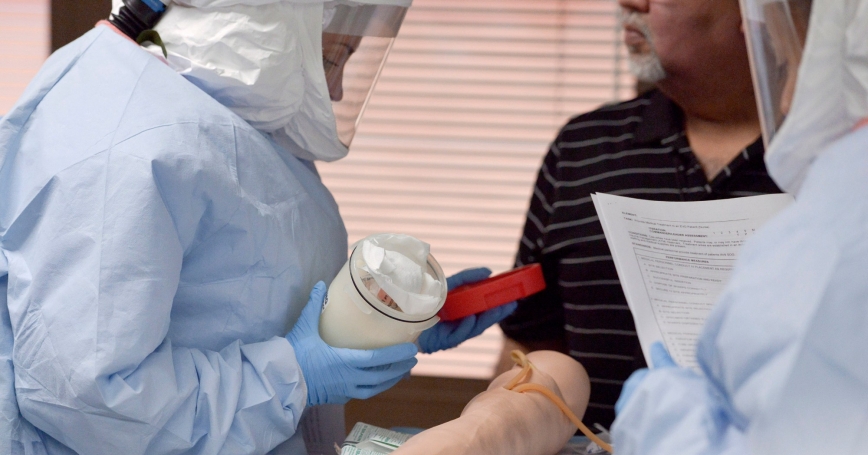 Participants practice a medical procedure on a dummy arm during training for the Ebola response team at Fort Sam Houston in San Antonio, Texas, October 24, 2014

by Mahshid Abir and Richard Serino

Just a month ago, the prospects of a patient being diagnosed with, let alone contracting, Ebola on U.S. soil seemed remote. However, not only did the first U.S. Ebola patient succumb to the disease at a Texas hospital, two health care workers who cared for him subsequently tested positive for the virus. Just as one healthcare worker was pronounced Ebola free, a new case of Ebola was diagnosed in New York City. The governors of New York and New Jersey then set forth a mandatory 21-day quarantine for health care workers returning to their states who have cared for Ebola patients abroad.

These events have demanded the full attention of the government authorities and health care systems that are charged with managing the immediate risk of Ebola to protect patients, health care providers and the community at large. But public health emergencies and disasters are much more easily managed when communities pursue the parallel goals of preparedness and resiliency, the ability to bounce back and recover from a public health emergency or disaster, in advance. Communities that invest in strengthening relationships across various sectors can be better positioned to craft successful strategic responses in times of emergency.

Many legitimate questions have been raised regarding U.S. hospitals' capabilities and level of preparedness to deal with individual Ebola patients and a potential widespread Ebola outbreak. Protocols for pre-hospital and in-hospital handling of suspected or confirmed Ebola cases have been scrutinized. Last week, the Centers for Disease Control and Prevention released updated recommendations for the safe handling of such patients.

When dealing with Ebola, it is important to remember that the response, and the communication around it, must consider the public's fear about the possible spread of the virus. Ignoring these fears, and those of first-responders, health care workers and patients, allows misinformation to persist and fear to grow. So far, efforts to meaningfully engage the whole community in Ebola education and limiting misinformation and rumors have fallen short.

Strategies to deal with public health emergencies, as they are happening and before they occur, should involve all key stakeholders including federal, state, and local government, public health, emergency medical services, hospitals and health care systems, local community health centers, private businesses (large and small), not-for-profit agencies, faith-based communities and, most importantly, the public.

One of the first steps should be to engage these various community stakeholders to understand their capabilities and needs. Once these things are known, information-sharing networks can be established to help educate the public through social media, printed material, media outreach and word of mouth. Federal and state governments should continue and expand providing grant funding for communities to encourage stakeholders to work together toward enhanced preparedness and resiliency, through information sharing, training, preparedness drills and education. The business community also has a role to play in helping to organize and educate communities, using their intersection with the public as a nexus for sharing information and coordinating responses.

Such collaboration with aligned goals and incentives can create relationships that can be leveraged over the long term to enhance community preparedness and resilience for this and other public health threats and disasters. One example of such an approach came after the 2011 Joplin, Missouri, tornado as federal officials engaged with local government and other stakeholders to shape a whole-community response. This direct engagement and dialogue resulted in a more targeted and effective response and made Joplin more prepared for future incidents.

Building more prepared and resilient communities will require a sustained investment of resources on the part of all stakeholders. In the past, investments in preparedness have fluctuated, with predictable peaks after incidents (for example, after 9/11 and hurricanes Katrina and Sandy) followed by waning interest as time passes. These investments also can be subject to economic and political pressures. Shrinking from a commitment to preparedness and resiliencies once a disease stops spreading or floodwaters recede is a mistake.

Investments in long-term, sustainable strategies for community preparedness and resilience benefit everyone over time. Crafting an effective whole community strategy to respond to Ebola could have the twin benefits of stopping the spread of the disease now and laying the groundwork for responses to future disease outbreaks and other emergencies. In the long run, this could make public preparedness and resilience valuable national assets.

Mahshid Abir is an adjunct natural scientist at the nonprofit, nonpartisan RAND Corporation and an emergency physician at the University of Michigan. Richard Serino is a current distinguished visiting fellow at Harvard University's National Preparedness Leadership Initiative, the former deputy administrator of the Federal Emergency Management Agency and the chief of EMS and assistant director of health for the city of Boston.

This commentary originally appeared on U.S. News & World Report on November 7, 2014. Commentary gives RAND researchers a platform to convey insights based on their professional expertise and often on their peer-reviewed research and analysis.