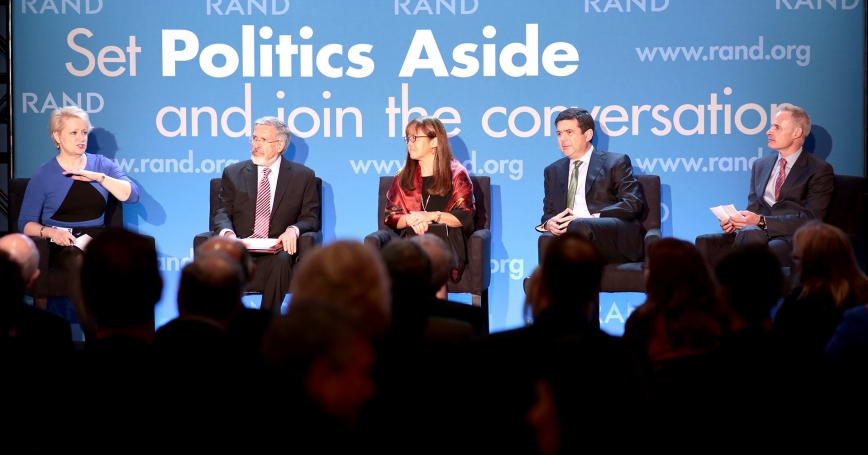 Tackling the topic of health care in America is a challenge on any scale, but tackling it in a one-hour discussion panel is a very tall order. That's what a highly qualified panel of subject matter experts did during the RAND Corporation's Politics Aside panel titled “Innovations in Health Care: New Treatments, Changing Systems.”

From the Affordable Care Act and new advances in medical technology to the impact of the aging population, the panelists discussed a wide-range of topics affecting America's health care system today and into the future. “We live in very interesting times when it comes to health and health care,” said Susan Dentzer, Senior Policy Advisor at the Robert Wood Johnson Foundation, who moderated the discussion.

The panel included David Goldhill, CEO of the Game Show Network and author of Catastrophic Care: How American Health Care Killed My Father, And How We Can Fix It; Leonard Schaeffer, Senior Advisor, TPG Capital and Founding Chairman and CEO of WellPoint; Sue Siegel, CEO of GE Ventures and healthymagination; and Bob Kocher MD, Partner at Venrock and former Special Assistant to the President for Health Care and Economic Policy.

“The aging population is the most important demographic trend that most countries including the United States, have not prepared for it,” said Schaeffer. “People are living longer, which is good, but they are living longer with chronic illnesses and functional limitations. We know that costs are going to grow dramatically … Unless we change how we deliver care and how we pay for it, the cost of health care for an aging population will cripple our economy.”

This idea of who pays and profits from health care was a recurring theme of the panel, and one of particular interest to Goldhill, who owns a business and provides health insurance to his 400 employees. “The reason we haven't had the innovation in health care we've had in every other single consumer facing industry over the last two decades is that no one will get paid for it.” He also noted the opinion that businesses should not be driving the health care economy.

But Schaeffer called into question the entire concept of health “insurance” as opposed to prevention. “There's a school of thought that says insurance is the wrong way to fund health care because it comes from the notion of casualty insurance … like a barn catching fire. Not so smart to ensure against health problems if most of those problems can be both caused and ameliorated by individual behavior,” Schaffer said. He explained that the current system is a pay for service system similar to other consumer models, the problem in this case is that the consumer (patient) doesn't know what he or she needs. “Too many people get the wrong care at the wrong place,” he said.

Also on the topic of prevention, Kocher said the best way to get people to take better care of themselves and make healthy choices is to make it personally rewarding. “People like doing things that make them happier, skinnier, richer or make things easier or smarter. Health care prevention and lifestyle type things don't really hit those buttons,” he explained. “At the end of the day, if we're going to have people be healthier, we need to make it actually as fun as the other things we choose to do and spend our money on.”

Another trend that garnered interest from audience and panelists alike was the concept of digital health or, SMAC (Social, Mobile, Analytic and Cloud) technology, and its application in the health care field. According to Siegel, application of technologies such as telemedicine and remote care are offering unprecedented opportunities to reduce overall health costs, provide convenience for patients and increases quality of care.

The final question asked of panelists was: Where are we going and what is the future going to look like in terms of health care for the average American? According to Kocher, the picture is changing. “The future is going to look a lot more like that picture where the doctor is at the patient's house, by their bed, caring for them with a lot fewer distractions around them. I say that because when you do change how you pay, it re-orients what a doctor does to care a lot more about having that patient and family being educated on their options,” he said.

I'm a health policy analyst by trade, so this discussion was great.

What made it great?

I really enjoyed the diversity of opinion. It represented ideas from both the demand side and the payer side.

What idea intrigued you most?

I liked that we started talking about health as opposed to medical care, because they're two very different things. We talked about what we need to do in order to create a healthier society and a healthier world—and not just treat injuries and disease.