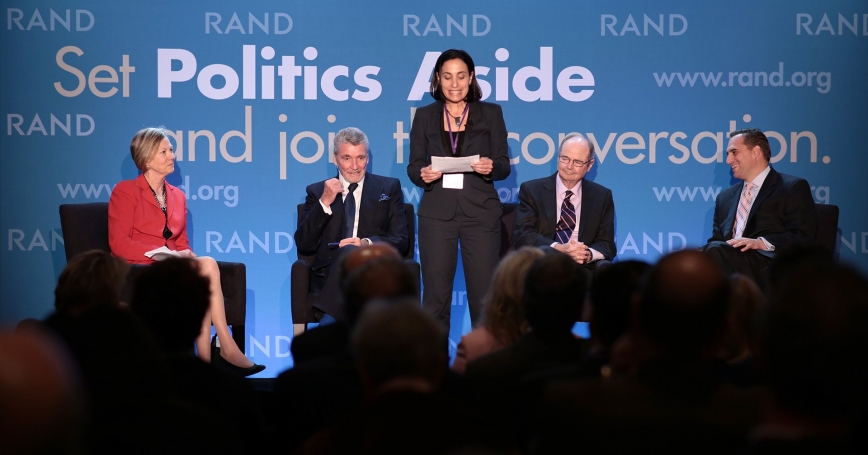 While ISIS poses a threat to the United States, violence from the group is not likely to be aimed directly at the American homeland any time soon, according to a panel of experts who discussed the Middle East on Nov. 14 at the RAND Corporation.

The biggest threat posed to the United States by ISIS would be if the group held territory and became a friendly host to a terrorist group, such as al Qaida, that is intent on attacking the U.S. homeland.

Just as al Qaida launched the 9/11 attacks from Afghanistan when it was controlled by the Taliban, an attack could be mounted against the United States if ISIS were to establish a nation from the territory it holds in Syria and Iraq.

“Denying ISIS and similar groups the capacity to take and hold territory is important,” said panel member James Dobbins, a RAND senior fellow and Distinguished Chair in Diplomacy and Security. Dobbins is former special U.S. representative for Afghanistan and Pakistan.

The discussion about shifting alliances in the Middle East was a part of Politics Aside, RAND's postelection event that brings together policymakers, philanthropists and RAND experts for a nonpartisan examination of pressing policy challenges.

The expert panelists said it is important for the United States to continue bombing missions against ISIS while maintaining advisors in the region to bolster local forces fighting the group.

But Seth G. Jones, director of the RAND International Security and Defense Policy Center, cautioned that sending U.S. ground troops to the region would likely be unpopular at home and could spark a surge in radicalization in the region, just as the U.S. invasion of Iraq fostered radicalization across the region a decade ago.

Panel moderator Karen House noted that on a recent trip to Saudi Arabia she spoke with two acquaintances whose sons were attracted by the ISIS call to arms. One son left home to fight with the group and the other expressed interest in joining the fight. House, former publisher of The Wall Street Journal, is author of the book On Saudi Arabia: Its People, Past, Religion, Fault Lines — and Future.

Brian Jenkins, special assistant to the president of RAND and a terrorism expert, said it is believed that fewer than 200 Americans have traveled to the Middle East to become ISIS fighters. But across Europe the problem is much larger, with more than 2,000 leaving to join the ranks of the group.

Should those fighters return home, they pose a much greater risk in many parts of Europe than they do to the United States, Jenkins said. Jenkins is the author of a new RAND publication called “When Jihadis Come Marching Home,” which explores the threats posed by Westerners who return home after fighting for ISIS or other terrorist groups.

Jones said the United States and other nations need to do a better job of pushing back against ISIS propaganda that attracts many young men to its cause. There are many who have gone to fight, only to return home disillusioned with what they have experienced, he said.

Q&A with Ann Korologos, Chairman Emeritus of The Aspen Institute and Former U.S. Secretary of Labor

What did you find interesting in this panel discussion?

The discussion on the motivation of the Western Europeans, and some Americans, going over there to fight was extraordinarily interesting to me. Some of them have no family or they have personal issues. So it becomes a very personal motivation to go somewhere to do something. Or a second motivation of the idea of an Islamic state is very provocative. Those doing recruiting have at least the appearance of success, the way the news reports it.

Did you gain new insights into why westerners get recruited?

An issue I'm closer to, having lived in Belgium for a few years, is the make-up of key European countries, like Germany, France and Belgium. They have very large groups of Arabs, or Muslim-Arab residents who have been citizens of those countries for two or three generations, yet still they're sidelined. That creates fertile opportunity for recruitment. The sociological aspects of what's going on were interesting.

What were other thought-provoking aspects?

It gave me the flavor from three different viewpoints—four really, including the moderator. They are people with expertise, and historical knowledge that this has been going on for thousands of years. At the same time, the United States is much more vulnerable in the disagreements among these populations.