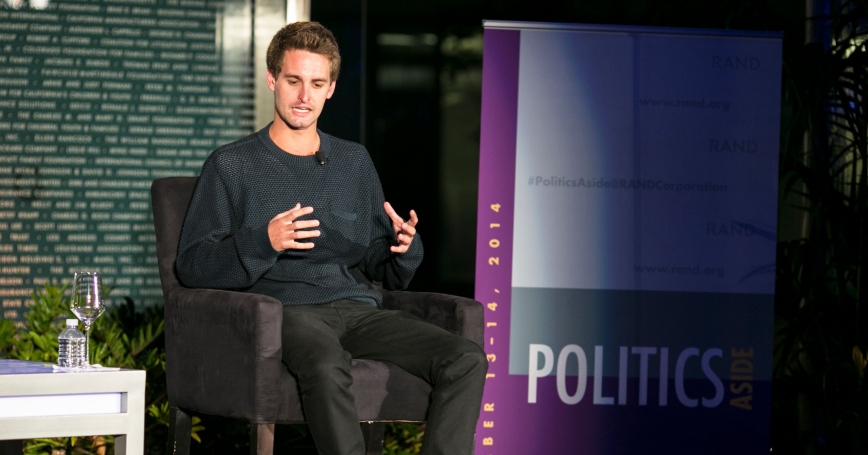 Evan Spiegel at RAND's Politics Aside 2014

Space experts marveled at last week's Rosetta comet-landing mission and imagined exploring Mars or the icy surface a Jupiter moon. Others peered into health care's crystal ball, forecasting how medicine will evolve as the global population grows grayer. The director of the U.S. National Security Agency (NSA) engaged in a frank discussion on security and privacy in the digital age, noting the importance of setting international standards for cyber security.

With technology a persistent theme throughout RAND's biennial Politics Aside event, it was only fitting that the proceedings closed with a conversation on social media between Michael Lynton, CEO of Sony Pictures, and Evan Spiegel, the 24-year-old co-founder and CEO of Snapchat.

Snapchat is a mobile application that allows users to send friends “snaps,” photos and videos that expire in one to 10 seconds. Of course, their friends can still take screenshots of these ephemeral visuals, but the app detects this and sends a notification back to the sender. The company fetched a $10-billion valuation this fall.

Spiegel called this paradigm “deletion by default,” and compared it to in-person conversations, where the only transcript is one's memory. By contrast, photography has historically been a “documentary medium.”

This, Spiegel said, is central to the app's appeal. By deleting the message automatically, the focus shifts to “the meaning and the feeling behind receiving the image,” rather than preservation. “That forced it to be about communication,” he said.

Later, an audience member compared Snapchat to Twitter, which also builds limitations into its functionality (i.e., a 140-character limit for messages). Spiegel said these limitations are “restoring context to communication.”

The discussion featured many moments of levity. NASA astronaut and Politics Aside panelist Cady Coleman asked if anyone had ever used Snapchat from space. Spiegel's response: “I don't know. Maybe you can help with that.” Coleman said she'd ask Samantha Cristoforetti, Italy's first female astronaut, who's scheduled to leave for the International Space Station on November 23, to send one.

And after a Ph.D. student from the Pardee RAND Graduate School asked Spiegel which technology policies he felt were most important, the young CEO gave the school a tacit endorsement. “You are considerably smarter than me,” he said to audience laughter, “and are probably in a better position to tell me what I should be worried about. So maybe after this, we can hang out or something.”

So, what's next for the tech world? Spiegel predicted a departure from the long-standing parallelism between digital objects and experiences, and those of the physical world. (For example, one's computer “desktop” is akin to an actual desktop, a computer folder is akin to a tangible file one might keep in a cabinet, etc.)

“As we leave the world of metaphors that's helped us learn how to use computers,” Spiegel said, “there's going to be a huge wave of innovation in Internet communications.”