The Mountains Are High and the Emperor Is Far Away 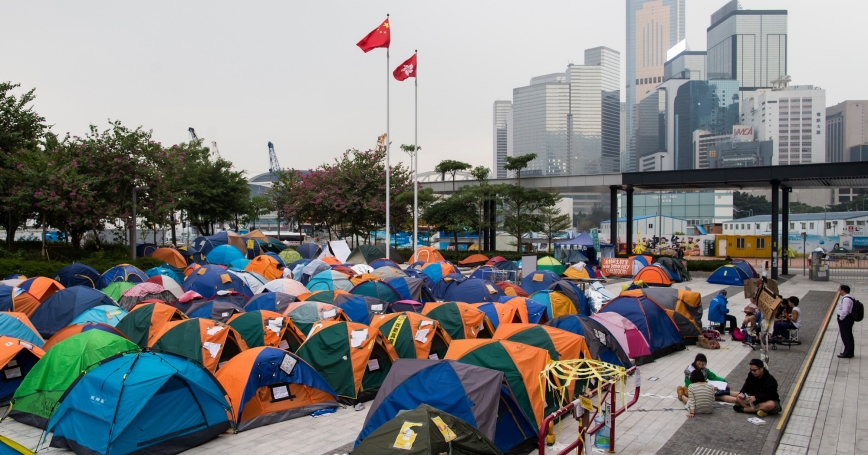 The flags of China and Hong Kong are seen above tents outside Legislative Council Complex at an occupied area in Hong Kong November 11,2014

Shan gao, huangdi yuan — “The mountains are high, and the emperor is far away.”

This traditional Chinese saying alludes to local officials' tendency to disregard the wishes of central authorities in distant Beijing. Indeed, many Chinese believe that social unrest in China occurs when corrupt or incompetent local officials fail to implement well-intentioned central government directives. Eager to deflect citizens' complaints away from the regime and toward (PDF) local officials, Chinese leaders have exploited this perception, adopting a strategy that Cheng Li of the Brookings Institution calls (PDF) “think national, blame local.”

Does this conventional wisdom hold for the recent Hong Kong protest movement? Since Sept. 22, tens of thousands of protesters have flooded the streets, calling for universal suffrage in the 2017 chief executive election and the resignation of current Hong Kong Chief Executive Chun-ying Leung. According to Hong Kong's Basic Law, the mini-constitution set in place when sovereignty of the former British colony transferred back to mainland China in 1997, Hong Kong must establish “universal suffrage” by 2017. But on Sept. 4, the central government in Beijing, under Chinese President Xi Jinping's leadership, issued an edict declaring that candidates must be vetted by a Hong Kong committee stacked with pro-Beijing interests — effectively guaranteeing that pro-democracy candidates would not make the ballot. This move ignited the protests that have now roiled the Asian financial center for over six weeks, though Hong Kong authorities now seem to be making plans to clear out the protesters. A court injunction on Nov. 10 granted police the power to arrest protesters who do not cooperate, and on Nov. 11 Hong Kong's number two Carrie Lam called on demonstrators to end the sit-in. The pro-Beijing Leung's staunch support of China's official position, as well as his alternately heavy-handed and evasive approach to the protesters, has vilified him among many of Hong Kong's pro-democracy supporters.

Which political leader — the local Leung or more distant Xi — appears to be the foremost target of protesters' discontent?

Measuring sentiment toward these two leaders in netizens' Twitter posts can help answer this question. Many Hong Kong protesters have used social media platforms like Facebook and Twitter to organize demonstrations and mobilize international support. Facebook and Twitter are blocked on the mainland, but these sites can be accessed freely in Hong Kong. (Although Hong Kongers also use Weibo, the mainland equivalent of Twitter, Weibo is less useful as a means of analyzing popular sentiment in this case because Weibo posts, especially those about sensitive topics like the Hong Kong protests, are subject to censorship.)

From Sept. 10 to Oct. 8, 38,000 tweets were tagged with the hashtags #UmbrellaRevolution or #OccupyCentral, and sent by users who either claimed to be located in Hong Kong or whose posts were geotagged within Hong Kong. Tweets were separated according to mentions of Xi or Leung (or Leung's nickname, 689, a reference to the number of votes he received from Hong Kong's 1,200 member election committee). This resulted in just fewer than 1,000 tweets mentioning either leader, with seven times as many tweets about Leung as about Xi. Tweets were processed using Linguistic Inquiry and Word Count (LIWC), an automated content analysis software designed to link word usage to psychological states.

Figure 1. Words Conveying Sentiment as a Percentage of Total Words (per tweet) 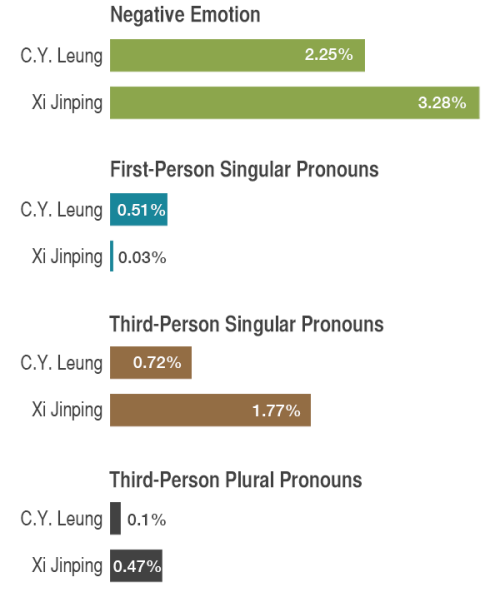 Hong Kong Twitter users discussing the protests may also have felt more distressed when writing about Leung and more disconnected when writing about Xi. Psychological research has found that use of first-person singular pronouns (e.g., “I,” “my”) is related to self-reflection, while use of third-person pronouns (e.g., “he,” “she,” “they”) suggests that those being referred to are somehow separate or different from oneself and one's group — that is, they are seen as “others.” As shown above, tweets about Leung used higher rates of first-person singular pronouns than tweets about Xi. Along the same lines, tweets about Xi contained proportionally more third-person pronouns than tweets about Leung.

It is intuitive that Hong Kongers would feel more detached when writing about Xi and more personally affected when writing about Leung, who is both geographically and culturally closer to the protesters. Yet while negative opinion towards Xi may be more strongly felt, the disparity in number of posts about each leader suggests that disapproval of Leung is more widespread than disapproval of Xi. The “othering” of Xi in these tweets parallels a tendency among Hong Kongers to identify less as “Chinese” and more with their city.

The compiled tweets also highlight a unique aspect of this protest compared to others across China. Many protests on the mainland condemn local officials for problems — including land seizures, environmental pollution, corruption, and employment discrimination — that citizens may perceive as stemming from noncompliance (PDF) with central government policies. In contrast, the pro-democracy protests in Hong Kong erupted in late September in response to a central government edict circumscribing universal suffrage in the 2017 local elections for chief executive. Not surprisingly, some Hong Kongers view Leung not as a local official improperly implementing Beijing's directives, but as the opposite: Beijing's obedient servant. For example, one tweet reads, “We don't care if [the] thief executive steps down, he is just Xi Jinping's puppet.” Several tweets referenced a CNN article that cast Leung as “Beijing's lackey.” This sentiment is further reflected in the graffiti depicted below, which shows Xi, dressed in Mao-era attire, guiding Leung (as represented by the wolf, the Cantonese word for which sounds similar to Leung's name) on a leash toward a crowd of yellow umbrella-wielding protesters. Thus while netizens call for Leung to step down, their opposition may ultimately be directed toward Beijing.

Of course, this comparison of sentiment toward the two leaders explores merely one aspect of the overall discussion surrounding the Hong Kong protests, much of which may not have been captured on Twitter. Moreover, the discussion on Twitter may have omitted or amplified certain voices; it is possible that a few key individuals may have disproportionately driven conversation targeting either Xi or Leung. In addition, the findings may reflect strategic calculations on the part of protesters who may have sought to avoid direct confrontation with Beijing by purposefully refraining from directly criticizing Xi.

Still, when Hong Kong netizens took to Twitter to share their ideas and mobilize support, they revealed the profound disconnect that separates elements of Hong Kong society from their mainland counterparts. These netizens turned “think national, blame local” on its head by blaming “local” for appeasing “national.” For Beijing, that's worrisome.

Douglas Yeung is a social psychologist at the nonprofit, nonpartisan RAND Corporation. Astrid Stuth Cevallos is a research assistant at RAND.

This commentary originally appeared on Foreign Policy on November 11, 2014. Commentary gives RAND researchers a platform to convey insights based on their professional expertise and often on their peer-reviewed research and analysis.