The Risks and Rewards of Emerging Markets 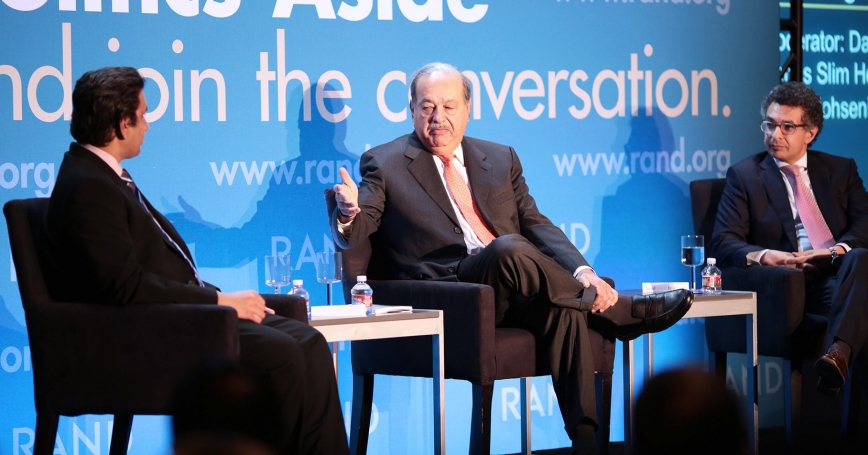 Emerging markets may offer challenges ranging from corruption to the threat of violence, but the rewards can be worth the risks, experts said during a panel discussion on “The World's New Emerging Markets: Challenges and Opportunities” at Politics Aside.

Carlos Slim Helú, a Mexican businessman, investor and philanthropist, and Saad Mohseni, CEO of MOBY Group, the largest media company in Afghanistan, discussed what makes these markets so appealing despite the risks, during a session moderated by Reuters Americas Editor Dayan Candappa.

Mohseni said his media company is relatively small, and chooses to do business in frontier markets because larger companies often do not want to take the risks. One key factor he looks at is demographics: Afghanistan, a country with a population of about 30 million is projected to reach 100 million by 2050, and Pakistan, now at 180 million, will reach 400 million in 2050. Technology also is enabling companies to go into some of these emerging regions and compete with state-run businesses.

Slim said the phenomenon of emerging countries is actually more important than the concept of emerging markets. Many of these countries are in the process of moving from largely agrarian economies with high amounts of illiteracy and poverty to more educated, urban societies that have embraced technology.

As those countries evolve, their forms of government and cultures may change, which can lead to tumultuous times, Slim and Mohseni said. For the economies of these developing nations to grow, their populations need access to education, health care and good jobs.

What drew you to this panel discussion?

I've worked in two industries in my life: the food industry and the toy business. Both are global businesses and the panel has some of the world's leading authorities.

Why is this an important discussion to have?

What does such a discussion add for someone already rooted in global business?

It allows us to step back from our day-to-day activities and look at the bigger picture. It's an opportunity to do that from an apolitical point of view, which is of most interest to me.