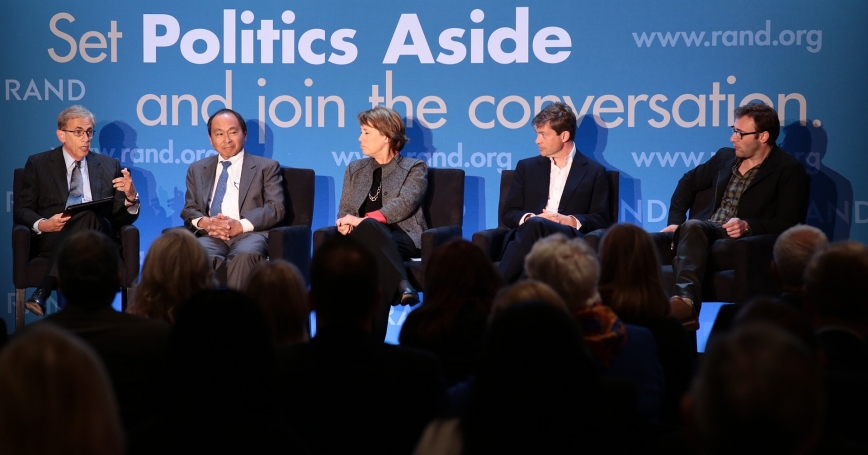 Leadership and governance were on the docket for discussion during the RAND Corporation's Politics Aside panel titled “Designing a Better World: Fresh Approaches to Governance and Leadership.”

The panel kicked off with RAND President and CEO Michael Rich asking: “What are the ingredients for an effective state?”

“It has to have a state, which is about power,” said Francis Fukuyama, Senior Fellow at the Freeman Institute for International Studies at Stanford University. Fukuyama added, however, that the state must have “the ability to use that power to enforce laws and provide services; it has to constrain power (and must have) rule of law that sets rules for the powerful. …And finally there has to be democratic accountability which makes sure the government acts in the interest of the whole community,” he said.

Other members of the panel included Sheila Bair, Chair of the Systemic Risk Council; Nicolas Berggruen, Chairman of Berggruen Holdings; and Simon Sinek, author of Leaders Eat Last: Why Some Teams Pull Together and Others Don't. Topics of discussion spanned numerous subject areas including politics, governance, economics, leadership and culture.

“The government is there at the end of the day to serve the public…. The issue is that the service part of democracies has become too politicized,” said Berggruen. Bair agreed saying, “We are public servants. We are servants and what we do shouldn't be politicized.”

Panelists also discussed the impact of polarization caused by well-organized and well-funded special interest groups, as well as complications caused by the large, complex economic and financial institutions in the United States.

“A lot of the cynicism and disillusionment we're seeing now and the lack of trust stems from the breakdown of the financial regulatory system leading up to the crisis, and the bailouts that helped people who were responsible for the mess to begin with,” Bair said.

Sinek offered his perspective on leadership and the implication of good or bad leadership on an organization or government. “Leadership has nothing to do with rank,” he said. “Authority comes with rank. There are many people who sit at the highest level of organizations and they have authority, but they are not leaders.” Sinek explained that trust in leaders comes from the belief that they have shared interests in mind. “When we have the sense…that they have their own interests in mind, or (that) they would sacrifice our lives to protect their interests, we will keep our walls up and keep a safe distance.…It's a very primal reaction,” he said. 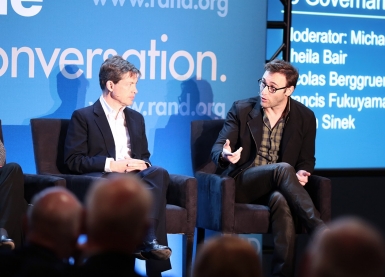 Nicolas Berggruen and Simon Sinek at RAND's Politics Aside 2014

Panelists also broached the subject of whether or not government is able to attract the best people. Berggruen said that government has to be able to attract people who are willing to lead and inspire, but they also have to be capable. “Government should be prestigious, rewarding, exciting. If you don't get the best people you will not get the best service.” Bair agreed: “Good people want to get things done. Do you want to go into government if you can't get things done?”

Sinek offered a very basic explanation for the polarization that exists. “Politicians today just don't spend a lot of time in Washington…. There is a breakdown in relationships because they simply don't know each other.” He went on to say that polarization is not just between Democrats and Republicans. “Democrats don't trust Democrats, and Republicans don't trust Republicans. Lacking good old-fashioned relationships, self interests prevail.”

According to Sinek, good leaders are people who stand for something, and who exist at a level above their own position. He offered two very different contemporary examples of good leaders. “A good leader that we can look to now is Pope Francis; he stands for something and he stands for something above his job as Pope.” He then both delighted and surprised the audience with his second example: “Lady Gaga is a really good example. She's consistent, her message is positive, it's about inclusion, she gives people a sense of belonging, helps people boost their self confidence, she meets all the rules of a good leader.”