Can Big Data Help Build Trust in the Police? 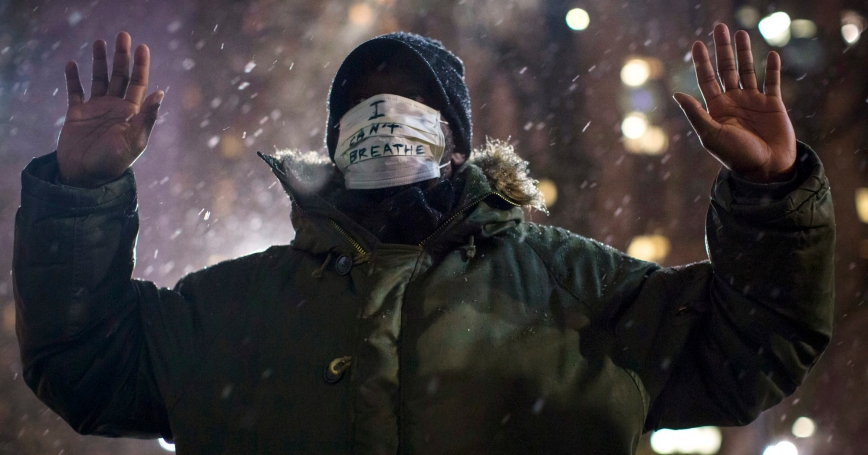 A man holding a "Hands Up, Don't Shoot" pose and wearing an "I Can't Breathe" mask outside City Hall, New York City, December 10, 2014

In November, a controversial grand jury decision not to indict a police officer in the shooting death of Michael Brown, an unarmed black teenager, rocked Ferguson, Missouri with unrest, spurring a national conversation on police-community relations. On December 1st, the White House responded by announcing the creation of a Task Force on 21st-Century Policing.

The task force will provide recommendations for institutionalizing best practices to promote a culture of accountability among law enforcement agencies in an effort to cultivate trust between police and the communities they serve. President Obama gave the task force 90 days to complete this work.

At first, the president's timeline may seem impossible. Sadly, however, these issues are old and the solutions are well known. Too many cities have already experienced tensions between minority communities and police, leading to social unrest and national soul-searching.

The task force can draw from best practices across various areas of police operations and technological development, such as issuing body cameras to police officers.

But recommendations based solely on best practices won't constitute a truly “21st-century” approach. One of the hallmarks of the 21st century is how individuals and organizations use data to improve performance. Thus, the task force needs to recommend ways to collect data about various aspects of police operations and provide open access for rigorous public examination.

Accountability is key, too. Without it, broken trust won't mend. The best way to achieve accountability is to be transparent about all aspects of policing. As Justice Louis D. Brandeis noted, “Sunlight is said to be the best of disinfectants; electric light the most efficient policeman.”

Analytical light should shine on all aspects of police operations that go beyond common policing tactics. For example, the public needs to know how police agencies conduct outreach and recruiting, evaluate applicants, train academy cadets, and develop and promote officers. Increased transparency will answer concerns and questions about the lack of demographic diversity among police officers.

My colleagues at the RAND Corporation and I have worked with police departments to improve their recruiting and demographic diversity. This means systematically analyzing data at every stage of the hiring process.

Police agencies should routinely release data about their hiring practices and share informative results that show how they're striving to improve the diversity of their workforce. And if they're failing to reach their goals in this area, they should also share reasons why. This type of transparency can foster trust and cooperation between police agencies and the communities they serve.

However, police agencies, especially smaller ones, should not be required to collect and share data on their own, since most don't have the resources or analytical capabilities to effectively and efficiently collect data and provide open access to the public. Providing raw data to the public won't improve transparency; data alone are not information.

The Department of Justice can support police agencies by developing standard protocols for data collection, data sharing, and analytical tools police agencies can use. The DOJ can also help police agencies conduct proper evaluations of initiatives and reforms. Without rigorous evaluations, progress will likely be limited, since it will be impossible to tell what's working and what's not.

The federal government already requires some data collection as a condition of receiving certain grant funds. But this may not be enough, since it does not require small police agencies that do not compete for federal grants to collect data and share results with their communities.

The DOJ should support infrastructure for all agencies—not just those receiving federal grant dollars.

By including such initiatives, the task force can truly provide the president with 21st-century recommendations. Only by enabling police agencies to provide meaningful, revealing analytics to their communities can the White House help police departments enhance levels of accountability, transparency, and public trust.

Nelson Lim is a senior scientist at the nonprofit, nonpartisan RAND Corporation and a professor at the Pardee RAND Graduate School.

This commentary appeared on Newsweek on December 15, 2014. It was originally published on The RAND Blog on December 11, 2014.