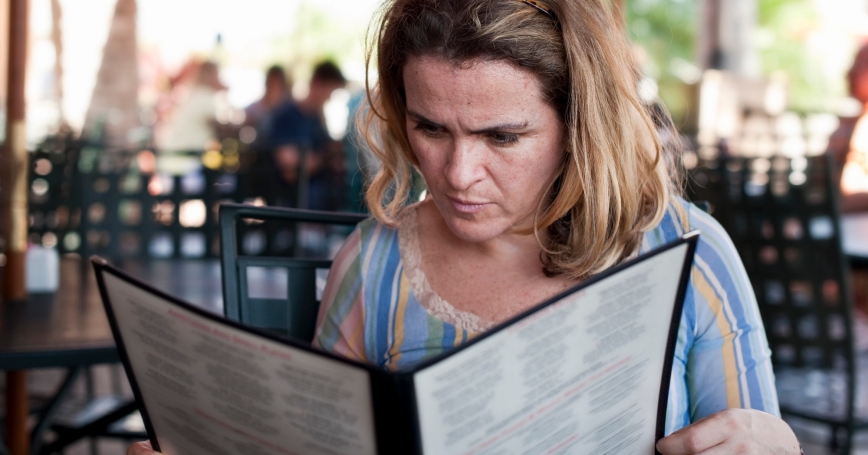 The FDA's new guidelines for calorie labeling on restaurant menus, retail establishments like convenience stores and movie theaters, and vending machines are a long-due recognition that eating away from home can be hazardous to health. But the new calorie-labeling mandate falls far short of providing the necessary fix.

Calorie labeling has been evaluated in dozens of studies. On the whole, it appears to have little impact on what and how much people eat.

Alternatively, hundreds of marketing studies have identified many strategies that do play a large role in influencing choice. Yet none of these strategies are currently being employed to help consumers make food choices that won't compromise their health.

When it comes to making decisions about eating, people mostly rely on non-cognitive processing—meaning they make choices automatically, without careful thought or analysis. Instead of taking the time to choose something healthy, they often make the easy choice or decide based on superficial appearances and characteristics: the item at the top of a list, the one with the best apparent value, or the one chosen by habit.

Analyzing calorie labels requires cognitive processing. That can be difficult to summon when one is hurried, stressed, or preoccupied, all of which may be in play while eating on the go.

Fast food “combo” meals are an illustration of how marketing exploits this. By automatically bundling the main item with what are typically unhealthy accompaniments, they appeal to people's non-cognitive minds, nudging them toward a single, simple decision—which meal?—and an apparent bargain. But for some consumers, combos may muddle the possibility that all they really wanted was the burger, not the sugar-sweetened beverage and fries, the consumption of which will increase their risks of heart disease and diabetes.

If customers were forced to order combo items a la carte, many might forego the fries or the soda—and also save money. Regulations could even require that combo meals meet the “My Plate” guidelines, which could have an enormous impact on the American diet. Imagine the health benefits of tapping into people's non-cognitive minds to boost consumption of fruits and vegetables, instead of fries and soda.

Similarly, positioning consumers to make more conscious decisions regarding portion sizes would be more effective than calorie labeling. Portion-size standards would make it very easy for people to routinely choose foods in quantities more appropriate for their needs. Single portions could be established that would not put anyone at risk for a chronic disease if consumed regularly.

All single servings of meat would not exceed three ounces. All single servings of uncooked vegetables would not be less than one cup. For unhealthy items like soda and fries, small quantities are unlikely to do substantial harm. According to the USDA, about 15 percent of daily calories can be “discretionary” (made of sweets or other low-nutrient foods) without causing harm. Thus, a single serving of a sugar-sweetened beverage would be no more than eight ounces, the daily threshold above which the risk of heart disease increases for women, according to the American Heart Association.

People could still order more (or less), but they'd only need to count on their fingers to figure out how far from the Dietary Guidelines they'd be straying, rather than having to use the algebra and geometry required to calculate risk from calorie labels.

Research has led to greater understanding of how food outlets use marketing strategies that appeal to people's non-cognitive minds to sell products and foods in unhealthy quantities. That understanding could be used equally effectively to inform regulations that counter those strategies. The automatic and non-cognitive choices should ideally be the healthiest ones, and the unhealthy choices should require the use of more demanding cognitive skills. Unhealthy choices could be less convenient, less salient, and correctly framed as low-value. In this context, if people are making a bad choice, they're making it deliberately.

Just as regulations preventing the spread of foodborne diseases from bacteria and viruses inform multiple activities—storage, preparation, and sanitation—it's time for a wide variety of new standards to counter the marketing strategies that lead people to inadvertently eat too much or order unhealthy items. Only then will the United States start to control its epidemic of obesity and diet-related chronic diseases.

This commentary originally appeared on The Hill on December 10, 2014. Commentary gives RAND researchers a platform to convey insights based on their professional expertise and often on their peer-reviewed research and analysis.