Domestic Violence as a Way of Life: The Reality for Papua New Guinea's Women 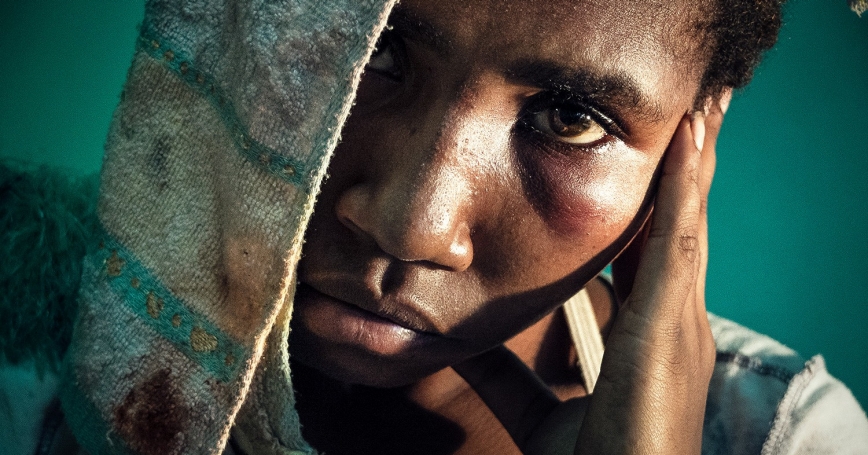 A survivor of sexual violence, waiting to be seen at the Antenatal Clinic in Port Morseby, Papua New Guinea

In Papua New Guinea (PNG), the South Pacific's largest island, extreme forms of gender-based violence are frequent and unpunished—and more than half of reported victims of sexual abuse are age 15 or younger. Groups like Doctors Without Borders say the widespread abuse of women by domestic partners, criminal gang members, and even members of law enforcement across the nation of 7.3 million resembles what is observed in conflict zones. This view is supported by studies that estimate interpersonal violence, including intimate partner violence, to be far more prevalent and more costly than violence perpetuated during civil wars.

Efforts by the national government to address violence against women have been slow, due to policymakers' reluctance to acknowledge what the community considers “social” or “private” issues as public matters. Domestic violence in PNG has been trans-generational and embedded in the culture's low view of women's place in the family.

Women's status in PNG not only subjects them to harm at home but is also reflected in their poor health outcomes. WHO studies have shown that when women experience interpersonal violence, they are 16 percent more likely to bear a low birth-weight child and be at a higher risk for contracting sexually transmitted infections. PNG women also have a lower life expectancy than men, although the reverse is typically true in most countries around the world.

There is no comprehensive data that fully details the different ways women in PNG experience violence; most islanders live in remote areas where data collection has been a challenge. The available information has come from qualitative community studies by government and non-governmental organizations (NGOs). These data are substantiated by direct accounts from survivors and victims' families.

A 2009 study (PDF) noted that nearly two-thirds of participants said they were survivors of domestic violence. These percentages are extremely high when compared to the global average wherein 30 percent of women say they experienced intimate partner violence—the most common form of violence experienced by women—at one point in their lifetime. Most women in PNG said it was difficult to disclose abuse to family members or to report incidents to authorities because of the stigma that exists about these crimes, the lack of community support, and a weak criminal justice system.

In recent years, efforts to reduce violence against women have received greater attention from policymakers due to the work of civil society organizations interested in women's rights and increased media coverage. In 2012, 101 East, a weekly program broadcast by Al Jazeera English, featured a documentary on the plight of PNG women, exploring why so many are assaulted and highlighting community-driven recommendations to reduce the violence rates.

Most recently, Vlad Sokhin, a freelance photographer and multimedia producer, published his photo book Crying Meri, which documented gender-based violence in PNG. This two-year project was supported and showcased by groups like UN Women and Amnesty International. He worked with NGOs, local social workers, and human rights advocates to identify survivors willing to tell their stories—and most he approached agreed to be photographed, in hopes their sharing might spare their daughters and granddaughters their horrific experiences. He also photographed perpetrators who openly talked about their crimes without qualms about prosecution. The final product is a stunning compilation of harrowing pictures and short stories.

In the meantime, two dozen employees of the National Public Service, PNG's largest employer, volunteered to become role models with the goal of changing attitudes and behaviors about PNG women's rights both at the workplace and at home. These men are the faces of 19 government departments and have pledged to support the National Public Service Gender Equity and Social Inclusion Policy by identifying loopholes in laws and policies that might deprive women from attaining justice.

There also are many PNG women, such as Monica Paulus, who work tirelessly at their own peril, to defend women's rights in their communities. Paulus' group, the Highlands Women's Human Rights Defenders Network, seeks to rescue and support women accused of the still prevalent claim of sorcery. Paulus strives to help the accused women find temporary shelter, health care, and legal help to prepare their cases for court.

Although PNG has sought to improve its criminal justice system for decades, it was only in April 2014 that lawmakers approved family protection laws first drafted in the early 1990s. Besides criminalizing domestic violence, this new legislation strengthens protection orders and instructs law enforcement authorities to aggressively pursue and prosecute family violence and sexual assault cases.

A recent report by the Lowy Institute for International Policy argues that Australia, PNG's neighbor to the south and largest aid donor and key development partner, has the opportunity and responsibility to use its aid programs to support gender rights and equity. Canberra, through bilateral agreements, can press officials in Port Moresby to give higher priority to addressing gender-based violence by identifying and strengthening weak links in PNG's legal system and by providing resources to local initiatives that support affected individuals and families.

The problem of violence against women is a persistent one in PNG, and around the world. In addition to ratifying international and national agreements that protect women from abuse, the PNG government should invest in more research so that the true extent of the problem can be captured. Moreover, local programs, especially those that actively involve men, should be encouraged and sustained.

Mahlet Woldetsadik is an assistant policy analyst at the nonprofit, nonpartisan RAND Corporation and a Ph.D. candidate at the Pardee RAND Graduate School. This blog was written for the Pardee Initiative for Global Human Progress.