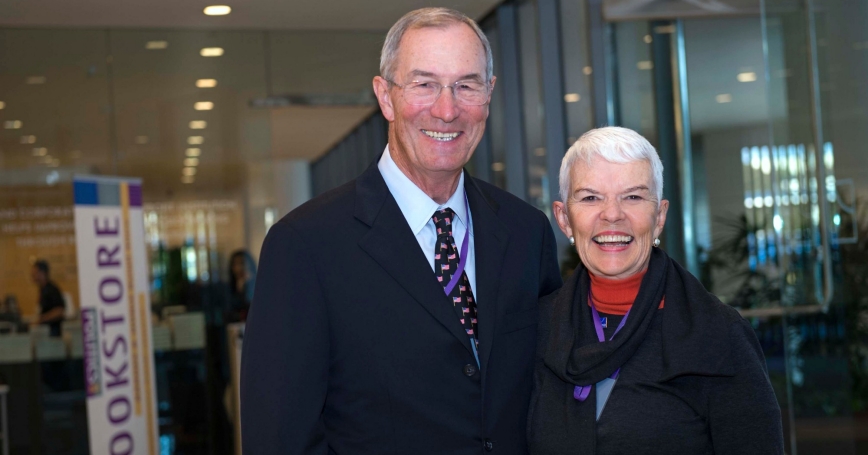 Don and Susan Rice at RAND's Politics Aside 2014

Longtime RAND supporters Donald B. and Susan F. Rice, for the third time, have established an endowed scholarship at the Pardee RAND Graduate School. Their most recent gift of $1 million was generously donated as part of Pardee RAND's Be the Answer campaign, which Don Rice chairs and which has thus far raised in excess of $19 million.

Rice Scholars for 2014–2015 are doctoral candidates Gulrez Azhar, Lisa Jonsson, and Xiaoyu Nie. Azhar previously worked in India on issues of environmental health, climate change, and infectious diseases. Jonsson served as a presidential management fellow and began her civil service career with the International Trade Administration Office of Policy as a trade analyst. And Nie worked as a research assistant at the Johns Hopkins Primary Care Policy Center, assisting with research projects on access to and quality of primary care for vulnerable populations in both the United States and China. She also interned with the World Health Organization in the medical devices unit, where she developed strategies for improving access to and effectiveness of medical devices in low- and middle-income countries.

Azhar, Jonsson, and Nie are just the latest Pardee RAND students to benefit from the generosity of the Rices. Seventeen current students and nine alumni have received Rice scholarship funds as well.

According to Susan Marquis, dean of the graduate school, “We are deeply appreciative of the Rices and their long-standing support of the graduate school. Don and Susan have provided not only financial support to our students but also encouragement, experience, and ideas to the school and RAND. Their wisdom and friendship have been invaluable.”

Don Rice was RAND's president from 1972 to 1989. Today, he is a RAND trustee and a member of the graduate school's board of governors (which he formerly chaired). He left RAND in 1989 to serve as the U.S. secretary of the Air Force. Susan Rice is also a RAND alumnus who worked at RAND for many years, primarily on health research and fundraising initiatives. Her firm, SFR Consulting, works with nonprofits on fundraising initiatives; she is particularly interested in expanding a culture of philanthropy in nonprofits.