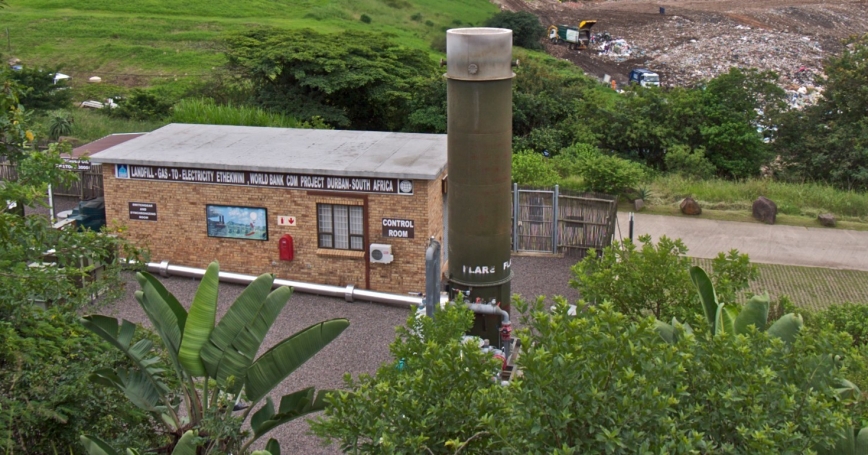 South Africa's landfills are reportedly rapidly reaching capacity—as are those in many developing countries. Surveys show that only about 3 percent of urban South Africans sort and recycle their household waste frequently. Until recycling becomes more widespread, the nation will have to keep building landfills.

Especially in developing countries, however, landfill sites often become eyesores, nuisances (PDF) and even outright hazards, replete with rats, flies, pollution, contamination, stench, environmental degradation, and greenhouse gas emissions. While there have been recent efforts to show the resilience of the poor in adapting to such sites, there's little question about the misery these spots can bring.

But in the eThekwini Municipality in South Africa's KwaZulu-Natal province, bold investments made over the past 20 years have created a dump with a difference. Rather than being a blight on the neighborhood of Mariannhill, the state-of-the-art Mariannhill Landfill Conservancy is an asset.

The complex, the first of its kind in Africa, boasts a high-tech "closed loop" waste disposal system, a leachate treatment center, a methane gas-to-electricity plant, and a national conservancy with 120 acres of restored indigenous vegetation. In the conservancy area, the project has built hiking paths, picnic sites, wetlands, and bird-watching areas. It has actively promoted biodiversity, and today one can find several rare species of birds, frogs, lizards, and snakes there.

The landfill receives about 3,500 tons of municipal waste per day, which is disposed of in special cells, used one at a time, that are set back from residential areas behind mandatory buffer zones. The cells have four layers of engineered barriers, which prevent waste materials from contaminating the groundwater and surrounding areas. Leachate—liquid runoff containing harmful substances—is contained, collected, and treated. The purified water is then reused.

Under a partnership with the World Bank forged in 2002, the facility also includes an Austrian-produced gas engine and generators that convert landfill gas (largely made up of the greenhouse gases, carbon dioxide and methane) into electricity (PDF). That power is then pushed into the local grid. As a result, the landfill offsets 20,000 tons of carbon dioxide each month and produces enough electricity to power 3,750 small houses. It does so both by trapping landfill gas that would otherwise have entered the atmosphere, and by reducing the need for coal-fired electricity.

The carbon-reduction effort also allows the municipality to sell carbon credits through a Clean Development Mechanism project created through the Kyoto Protocol. Carbon-credit sales to parties such as a British emission trading company could earn the local government more than 26 million South African Rand ($2.3 million) over the next 15 years. A second landfill in KwaZulu-Natal has also installed a gas-to-electricity facility, which is generating additional revenue.

While the city's landfills once were infamous for their stench, the Mariannhill Landfill is now widely hailed as a model of best practice. The project has won both local and international awards, including the Dubai International Award for Best Practices.

Although many observers initially were skeptical of the project's high capital expenditures (PDF) and annual operating costs—especially in a province where 23 percent of households live in poverty—those investments now appear to have been forward-thinking. Aside from its benefits for the environment and surrounding neighborhoods, the project generates a net profit to the municipality through electricity and carbon credit sales, in addition to creating both skilled and unskilled jobs and training for civil engineering students.

Partnerships between the landfill project managers, the surrounding community, environmental NGOs, international organizations, and both local and national governments have been key to the project's success. The project could conceivably benefit even further from South Africa's entrance into other international partnerships, such as the Global Methane Initiative (GMI).

The GMI promotes cost-effective methane recovery through partnerships between developed and developing countries. It also encourages the participation of private sector companies, development banks, and other nongovernmental organizations. A large part of the program focuses on capturing and using methane emissions from landfills for productive purposes, although it also seeks to reduce emissions in four other sectors: agriculture, coal mines, oil and gas systems, and wastewater systems.

The GMI, initially launched in 2004 as the Methane to Markets Partnership under the leadership of the United States, currently includes 43 countries with special expertise and interest in developing methane reduction projects. South Africa is not yet a member, but three other countries in Africa—Nigeria, Ghana, and Ethiopia—have already joined. A RAND study evaluating U.S. contributions to the GMI found that funding, technical assistance, and programmatic and strategic guidance from the U.S. State Department and Environmental Protection Agency had supported as many as 2,000 GMI-related activities around the world and contributed to substantial methane reductions.

Given strong interest from developed countries in providing funding and support, developing countries could benefit from investing in engineered landfills and waste-to-energy plants. Instead of allowing disorderly trash heaps to proliferate on a haphazard basis, developing countries should explore the potential advantages of joining international partnerships and adopting more advanced waste-management practices. The Mariannhill Landfill Conservancy in South Africa provides an example of how ambitious, high-tech landfills can be good neighbors, environmentally sustainable, and profitable—even beautiful.

Julia Pollak is an assistant policy analyst at the nonprofit, nonpartisan RAND and a Ph.D. candidate at the Pardee RAND Graduate School. This was written for the Pardee Initiative for Global Human Progress.