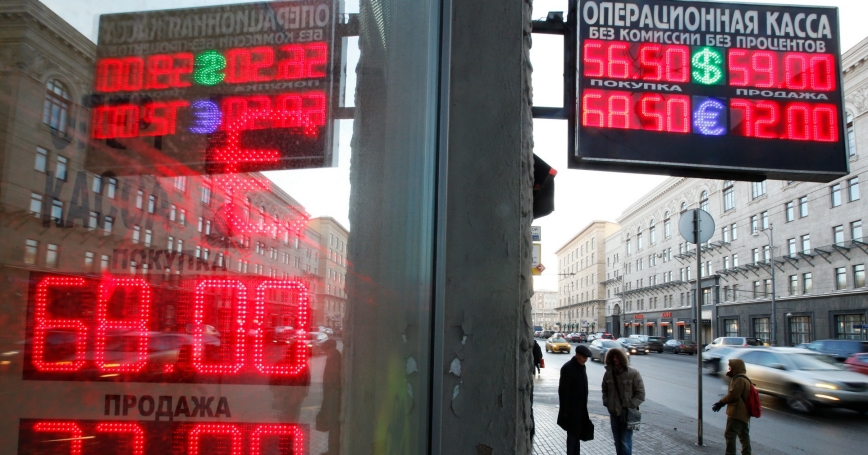 A board displays currency exchange rates on a Moscow street, December 29, 2014

The ruble's dramatic decline threatens to plunge Russia into a full-scale economic crisis. President Vladimir Putin has attempted to minimize the difficulties and deflect blame toward the West, but the problem is serious and no one is to blame but Mr. Putin himself. His efforts to destabilize Ukraine have brought painful sanctions upon Russia, reinforced its dependence on oil, and isolated its economy.

Yet Russia's crisis holds both risk and opportunity. The risk is that an economic collapse might lead the Kremlin to lash out more severely against Ukraine and the West. But there is an opportunity to be seized if the ruble's fragility increases Russia's readiness to de-escalate the war in Ukraine in exchange for relief on sanctions and revitalized economic ties with the West.

The roots of the ruble crisis are twofold, brought on by the decline in global oil prices, which sharply cut Russian state revenues and made the national budget untenable, and by the impact of sanctions that the United States and the European Union have imposed in response to the Kremlin's efforts to undercut Ukrainian independence. While the sanctions have had some economic impact, more importantly, they have made it harder for Russian banks and companies to refinance maturing debt, and have led private citizens to send their funds abroad. All this makes an already risky business climate much worse.

The collapsing economy adds serious risk to an already tense standoff with Russia. Mr. Putin is well aware that his popularity rests on economic, social, and political stability. A severe downturn could erode his domestic support. To save himself, he may again resort to the dual levers of nationalism and foreign adventurism to shore up his popularity at home. While this strategy would not be sustainable in the long term, in the near term it would guarantee that the animosity between Russia and the West spirals to dangerous new lows. The most severe consequences would surely be felt by Ukraine, but the Baltic states could also be targeted.

Reducing these risks and seizing the opportunity the crisis presents calls for a comprehensive policy that offers phased sanctions relief but also includes enhanced deterrence and a renewed commitment to Ukraine's independence. The breakdown of peace talks in Minsk last week only makes the need for a truly comprehensive package more urgent. It would include these basic elements:

Even as the Minsk talks collapsed, Russia agreed to continue providing Ukraine with coal and electricity, a sign that Moscow may still be seeking a deal. We think this package would offer Russia a brighter economic future along with recognition of Russia's enduring importance to the West. It would also stabilize Ukraine. But it still may be a hard sell. Reviving the Group of 8, NATO-Russia Council, and other channels as part of a comprehensive deal would help. So would high level E.U.-Eurasian Union meetings.

Mr. Putin may still choose to escalate the confrontation in spite of the economic storm ahead. But American and European diplomats must use the crisis to offer him an alternative path.

This commentary originally appeared in New York Times on December 30, 2014. Commentary gives RAND researchers a platform to convey insights based on their professional expertise and often on their peer-reviewed research and analysis.