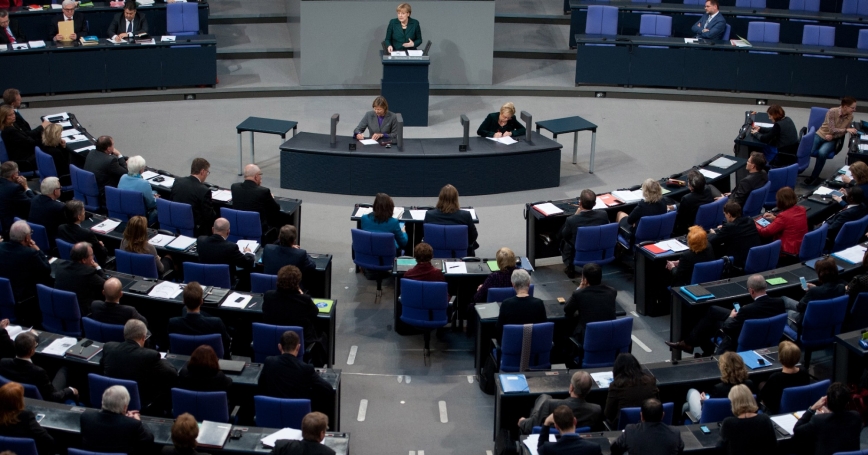 German Chancellor Angela Merkel makes a speech at the lower house of parliament Bundestag in Berlin, Nov. 26, 2014, during which she accuses Russia of violating international law with its interventions in Ukraine and said resolving the conflict would require patience

Germany and America are leading Western policy in addressing the Russia-Ukraine crisis. The basic strategy is to support Ukraine and pressure Moscow to halt aggression, while leaving the door open to diplomacy. Sustaining Western unity is essential, but may not be easy to achieve. It could be tested by Ukrainian inaction, the need to bolster aid to its failing economy, a U.S. decision to supply lethal defensive arms to Ukraine, the pull of Western economic interests in Russia or expanded aggression by Moscow.

The Russian intervention in Ukraine and annexation of Crimea have stirred strong objection in the West. German chancellor Angela Merkel has stepped out to lead the West's efforts to preserve European security. In over thirty meetings and telephone calls with President Vladimir Putin, she has made clear that, as she told the Bundestag on November 26, Russia's actions threaten “the peaceful international order and breach international law.”

Unlike some of her NATO counterparts, Merkel is signaling that the West is ready for sustained confrontation. At the Bundestag, she called for “staying power to overcome the crisis.” Economic sanctions on Russia were “unavoidable,” even as Germany “[spares] no effort” to seek a diplomatic solution. A Politbarometer public-opinion poll for German ZDF television last week found that support in Germany for Merkel's position was strengthening.

Through multiple channels, the West has sought dialogue with the Kremlin, and these efforts should continue. But Russia's barely disguised aggression, amid false narratives about supposed threats to ethnic Russians in eastern Ukraine, has hardened Western attitudes. Russia's recent shows of military force in other areas of the world have helped solidify opinion.

Thus far, the Western response to the Russia-Ukraine crisis is unified, and this must be preserved. Yet challenges to consensus may lie ahead.

Ian Bond, director of foreign policy at the Centre for European Reform in London, was U.K Ambassador to Latvia.

Michael Haltzel, senior fellow at the Center for Transatlantic Relations of the Johns Hopkins University's School of Advanced International Studies, was staff director of the Senate Foreign Relations Committee's Subcommittee on European Affairs.

This commentary originally appeared on The National Interest on December 8, 2014. Commentary gives RAND researchers a platform to convey insights based on their professional expertise and often on their peer-reviewed research and analysis.