The Tortured Roots of Sectarian Violence 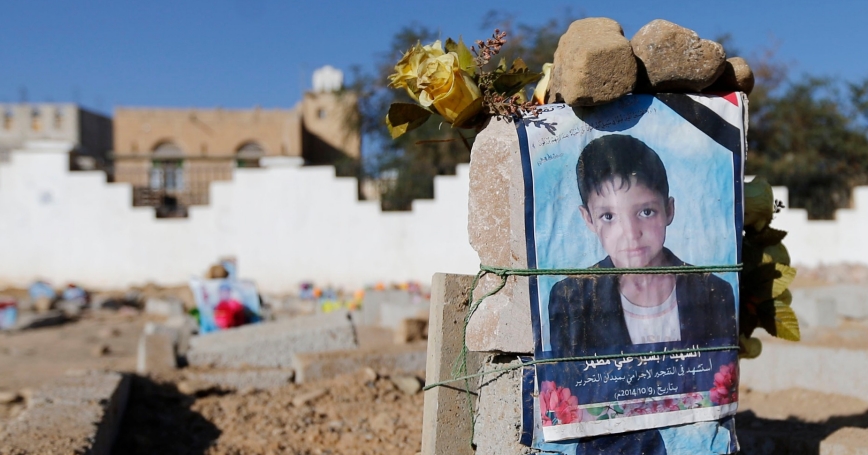 Posters of a boy, killed in Shi'ite-Sunni violence, displayed on his grave in Sanaa, Yemen, November 17, 2014

Since June 2014, the world has watched as sectarian violence has engulfed Syria and Iraq. More alarming, perhaps, are news reports that suggest a new and more deadly wave of terrorism is spreading throughout the Middle East, East Asia, and beyond.

This increasing level of sectarian terrorism is best understood as a product of the ancient Sunni-Shiite divide, the growth of modern-day extremist groups, the Iranian-Saudi rivalry, and the growing phenomenon of fractured states.

The root cause of increased levels of sectarian violence in the region is the centuries-old theological divide that exists between Sunni and Shiite Islam, which is manifested in today's rivalry between Iran and Saudi Arabia. Virtually all of the extremist groups responsible for today's sectarian violence throughout the Muslim world—from Hamas and Hezbollah to Al Qaeda and the Islamic State in Iraq and Syria (ISIS)—can be traced to either Iranian state sponsorship or Saudi conservative Wahhabism.

The ancient animosity between Shiite and Sunni Islam intensified with Iran's 1979 Islamic Revolution, which declared that a man appointed by Allah should rule not just the Islamic state of Iran, but all of Shiite Islam.

Iran sought to spread its form of Shiite Islam while simultaneously building relationships with Sunni revolutionary organizations such as the Muslim Brotherhood in Egypt and Hamas in the Palestinian territories. It also began to arm, train, and equip Shiite terrorist groups such as Hezbollah in Lebanon.

In addition, Iran began to provide support to the 10-percent Shiite minority in Saudi Arabia, resulting in a Sunni backlash and the rapid expansion of an extremely conservative version of Sunni Islam known as Wahhabism, which is vehemently opposed to Iran's interpretation of Islam, and is a theological cousin to Al Qaeda and its affiliated groups.

Modern-day sectarian violence has intensified along with this rivalry between Iran and Saudi Arabia. In 1980, Saudi Arabia backed Iraq's invasion of Iran in what became one of the bloodiest regional wars of the 20th century. In addition, Saudi Arabia sponsored Sunni militant organizations in Pakistan and Afghanistan to fight not only against the Soviet Union, but also against the growth of Shiite religious movements that Iran was supporting.

After the U.S. invasion of Iraq in 2003, Iran began to arm, train, and equip Shiite extremist groups to both prop up the newly formed Shiite-led government of Iraq and target U.S. and coalition forces serving in Iraq.

To counter this perceived rise in Iranian influence, Saudi Arabia and other Sunni states in the region at least tacitly supported Sunni extremist groups operating in Iraq, including Al Qaeda in Iraq, the predecessor of ISIS.

At the same time, the Iranian-backed government of Syrian President Bashar al-Assad allowed Iraqi Sunni extremist groups and Al Qaeda in Iraq to use eastern Syria as a safe haven from which they could attack U.S. forces and the government of Iraq. When the Syrian civil war exploded in 2011, these same Sunni terrorists seized the opportunity to attack the government and the populace of Syria.

Iraq and eastern Syria have been the location of a proxy war between Iran and Saudi Arabia for more than a decade, and have become a major battlefield for the Sunni-Shiite civil war that is being fought throughout the region.

Adding to the deadly mix is the emergence of fractured states. Until recently, sectarian terrorism was kept in check by authoritarian governments in places like Saddam Hussein's Iraq and Assad's Syria. However, Iraq's sectarian war of the last decade and the current civil war in Syria shattered state capacity to prevent the onslaught of sectarian violence, and aggravated the historical ethnic, religious, and sectarian grievances that permeate the region. In Iraq, Syria, and much of the region, fear and mistrust govern social and political interactions.

What we are now witnessing is the struggle for power and resources both within and between states. The West has sought to contain the struggle and its resulting violence to the region, but without a resolution to some of these long-smoldering issues, the bloodlust will only grow among sectarian terrorist groups as they continue to intensify the violence and plot its export.

Rick Brennan is a senior political scientist at the RAND Corporation and a career Army officer with high-level Department of Defense policymaking experience on issues relating to the ongoing war in Iraq, conflict resolution and war termination, homeland defense, and strategic planning.

This commentary originally appeared on The Mark News on December 11, 2014. Commentary gives RAND researchers a platform to convey insights based on their professional expertise and often on their peer-reviewed research and analysis.