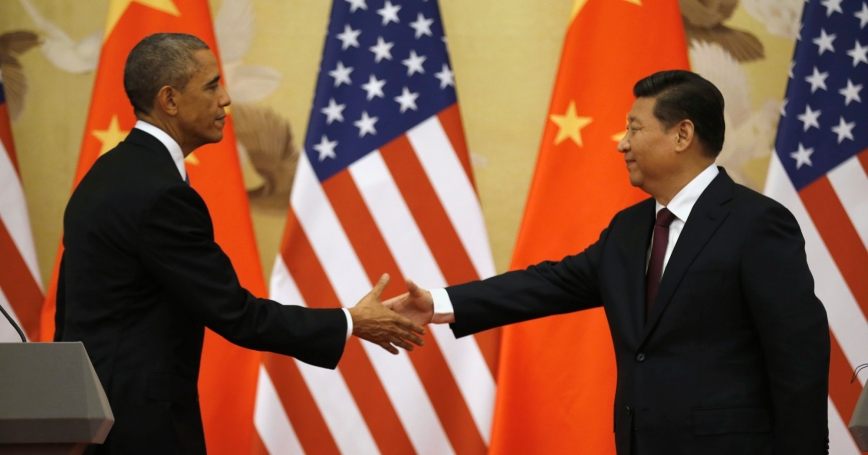 U.S. President Barack Obama and Chinese President Xi Jinping shake hands at the end of a news conference in the Great Hall of the People in Beijing, November 12, 2014

The U.S.-China agreement on limiting greenhouse gas emissions represents a significant and welcome shift in the international approach to addressing climate change. For the first time, a large developing country has agreed to limit its greenhouse gas emissions—a crucial step since these countries have become the world's largest sources.

But the agreement also represents an important step in reorienting the international community toward a new and more constructive role in slowing climate change.

Nearly 20 years ago, the world's governments committed to preventing “dangerous anthropogenic interference” with the earth's climate. Governments agreed at that time to define dangerous with a precise number—a 2 degrees Celsius (or 3.6 degrees Fahrenheit) global average temperature increase above average temperatures in the 18th century, before humans began burning significant amounts of fossil fuels. In annual negotiations hosted by the U.N. since 1995, over 190 countries have been seeking consensus agreement on emissions reduction targets consistent with meeting this 2 degrees Celsius goal. So far, such a global agreement has proved impossible to reach.

The U.S.-China deal represents a fundamentally different framework. It's a bilateral agreement between two large emitters, rather than a consensus among nearly 200 nations like that being discussed this week in Lima, Peru. It is also a type of agreement called “pledge and review,” that is, individual countries pledge to meet targets and share data so others can review their progress. Whether either country can actually meet its commitments will become clear in the review process. In addition, the U.S.-China accord expands technology cooperation, aiming to accelerate the transition to a low-carbon economy.

This agreement between the world's two largest emitters makes it more likely that the pivotal U.N.-sponsored Paris 2015 climate negotiations will succeed by adopting the same format. Rather than seek legally binding regulations, the U.N. climate negotiations could become a forum for mutual pledges and multilateral technology cooperation, with a formal mechanism for review. A global climate conference organized around a pledge and review framework is much more likely to lead to agreement than one aiming for legally binding emissions reductions.

But more importantly, such a framework can be expanded to create a dynamic that might actually reduce emissions fast enough to prevent dangerous anthropogenic interference in the climate.

Limiting climate change will require a sustained, decades-long effort to transform the way societies fuel their homes, businesses, farms and transportation. To date, no society has ever become or stayed wealthy without burning significant quantities of fossil fuels. China's emissions have skyrocketed in recent decades because they have lifted half a billion people out of poverty. Limiting climate change requires a technology revolution that can reconcile economic growth with eliminating carbon emissions.

But crafting policies to launch and sustain such a technology revolution can prove difficult, for at least two reasons. First, technology revolutions follow unpredictable paths. A large group of mostly cautious governments seeking consensus on legally binding targets will tend to focus on the least, rather than the most, transformative possibilities. Second, the benefits of less climate change are spread among many people over many generations, while the costs are disproportionately focused in the short-term on certain sectors of the economy. Those benefiting (today and in the future) may not prove as vocal as those who suffer the main costs.

History offers many examples of policy reforms that have succeeded and failed when faced with such dynamics. In some cases, major policy reforms persist and grow for decades, while others quickly fade away. The reforms that persist are often ones that create specific constituencies that strongly favor their continuation. Important examples in the United States include social security and airline deregulation. The former empowered retirees and the latter airlines, which increased their earnings with hub and spoke networks that made them strong supporters of the new policies.

Recent studies have examined how creating constituencies could speed a low-carbon technology revolution. Recent RAND work suggests that using revenues from a carbon price to reduce corporate taxes could significantly speed U.S. decarbonization rates by creating business constituencies that favor an expanding climate policy. Economist William Nordhaus recently proposed that countries voluntarily group themselves into a “climate club,” whose members would set a domestic carbon price on themselves, and impose equivalent carbon tariffs on trade with countries outside the club. Over time, more countries would have an incentive to join the club as the costs of remaining outside it grew. Other policies that create constituencies for reduced emissions include international standards for calculating the carbon footprints of goods and services as well as financial reporting requirements for the embedded carbon in investments. The former would empower environmentally conscious consumers and the firms that serve them. The latter would help steer funds to low carbon investments and create constituencies for strengthening the standards.

The current U.S.-China deal includes no explicit climate constituency expanding measures. But the pact between the two countries does open the door for agreements that include such measures among small groups of nations in the future. An international process that empowers small groups of countries to take the lead in creating constituencies for decarbonization could end up limiting climate change far more effectively than any consensus global agreement. The U.N.-driven process of international consensus would still have a role in shaping standards for fairness in multilateral agreements and the rules for what types of carbon tariffs are appropriate, but it would no longer be the driving force for international agreements. After 20 years, it may be time for a change.

Robert Lempert is a senior scientist at the nonprofit, nonpartisan RAND Corporation and director of the Frederick S. Pardee Center for Longer Range Global Policy and the Future Human Condition.

This commentary originally appeared on U.S. News & World Report on December 9, 2014. Commentary gives RAND researchers a platform to convey insights based on their professional expertise and often on their peer-reviewed research and analysis.