What Have We Learned from the Ebola Outbreak? 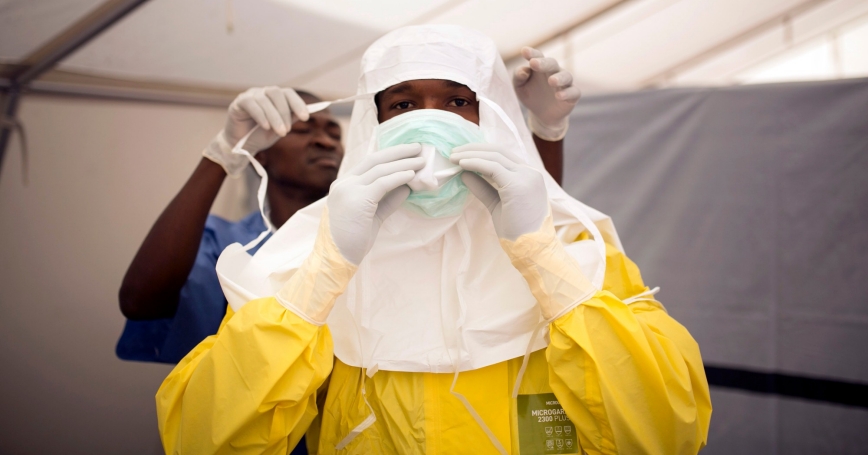 For much of 2014, the world has confronted the most deadly Ebola outbreak since the discovery of the disease in 1976, and it feels like an opportune time to examine what has been learned and how best to shape efforts going forward. To date, the World Health Organization estimates that over 19,000 people have been infected and that over 7,500 of these people have died. The outbreak has been centered in West Africa, primarily in the countries of Sierra Leone, Liberia, and Guinea with some spillover into neighboring African nations and a handful of other nations—including the United States—as a result of global travel and evacuations from West Africa. So what lessons have been learned and what should be done to be better prepared for transnational outbreaks?

First, there must be real-time diagnostics that are timely, highly sensitive, and highly specific. Being able to quickly identify those suffering from Ebola would enable early treatment and, perhaps more critically, isolate victims from family members and surrounding communities. Doing so is essential to halt the transmission of the disease. When diagnostic specimens need to be transported on lengthy journeys to laboratory facilities, as is frequently the case, definitive diagnosis cannot be made in a time frame that allows this to happen. This is not just a problem in African nations; the general lack of real-time diagnostic tools, both available and in use, contributed to the original misdiagnosis of Thomas Eric Duncan, who was the first Ebola case diagnosed in the United States. The investment must include proper training of health care professionals in the diagnosis, treatment, and protection of others from emerging infectious disease.

Second, crisis communications must be significantly improved. Communications must be fact-based, designed to provide relevant information to inform and protect the public. Inaccuracies in public statements by government officials during this Ebola outbreak communicated to health care providers and the public in the United States contributed to public concern, lack of proper precautions for health care professionals, and an initial loss of public confidence in government officials and the health care systems. The fact that two nurses who treated Duncan became infected, despite adhering to Centers for Disease Control and Prevention infection control guidance, did not reassure a nervous public.

Unfortunately, crisis communications shortfalls were not unique to this epidemic. In the spring 2009 H1N1 influenza outbreak, inaccurate information also contributed to heightened public concerns. Dire warnings about the upcoming 2009 fall flu season turned out not to be true. In fact, we cannot predict genetic shift or virus virulence; errors made in viral translation, transcription, and replication are random and the effect on virulence is equally unpredictable. So predictions made six months in advance—as in the H1N1 case—may prove inaccurate.

Third, the Ebola outbreak highlighted gaps in U.S. preparedness and response capabilities for emerging infectious disease. Diseases that are new to or rare in the United States will impose significant challenges to the U.S. health care system. Hospitals, for example, need to develop adequate surge capacity. In the event of an outbreak or a biological attack, the number of casualties could overwhelm the ability to provide care. Imagine the difficulties of treating hundreds of Ebola patients, when each requires specialized isolation facilities and up to 20 dedicated medical staff members, generates hundreds of pounds of highly contagious waste, and costs over $1 million per person.

Finally, the Ebola outbreak has demonstrated the unambiguous relationship between U.S. national health and global health. What happens in distant parts of the globe really does matter to the United States. With the 2003 severe acute respiratory syndrome or SARS outbreak that sickened 8,096 and killed almost 800 people in 32 countries serving as a backdrop, the World Health Organization in 2005 led revisions to the 1969 International Health Regulations. The countries of West Africa most directly affected by the Ebola epidemic have signed on to these more stringent reporting requirements, but it is clear that they lack the biosurveillance, diagnostics, and medical expertise to comply. To be fair, they are not alone in these shortfalls as many other nations also lack these capacities. Given these shortfalls, shouldn't wealthier nations bear the responsibility of assisting them to improve their preparedness and response capacity, both for humanitarian reasons as well as their own best interests?

Dire predictions of up to 1.4 million Ebola infections by January 2015 will likely not come to pass, but now is not the time to be complacent. Much has been learned, and these lessons must be translated into concrete actions that will improve national and global capacity in preparedness and response.

Daniel M. Gerstein works at the nonprofit, nonpartisan RAND Corporation. He was the former undersecretary (acting) and deputy undersecretary in the Science and Technology Directorate of the Department of Homeland Security from 2011 to 2014.

This commentary originally appeared on U.S. News & World Report on December 29, 2014. Commentary gives RAND researchers a platform to convey insights based on their professional expertise and often on their peer-reviewed research and analysis.