What Research Says About Profiling 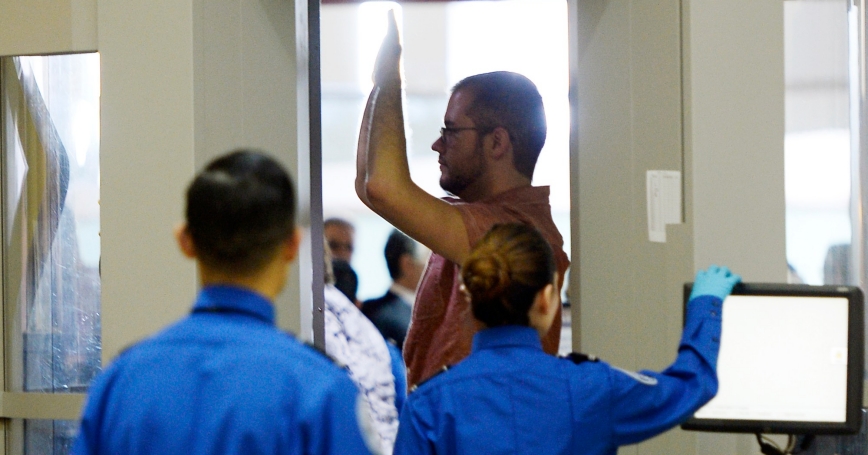 An airline passenger stands in a full-body scanner at a TSA checkpoint at LAX in Feb. 2014 after U.S. authorities issued a warning to airlines to watch out for militants who may have hidden bombs in their shoes

But there is a difference between targeting individuals for law enforcement actions based on these kinds of characteristics and using established risk patterns to target law enforcement efforts on certain people, places and times. The administration's announcement sends a positive message about eliminating bias in law enforcement. At the same time, though, not all forms of profiling are rooted in bias and some are legitimate and effective.

The administration's new rules come amid protests over recent grand jury decisions not to indict white police officers in the deaths of unarmed black men in Ferguson, Mo., and New York City. The use of racial profiling by police contributes to the anger of protestors in the streets of Ferguson, New York and beyond.

As Jack Riley pointed out recently in the Cincinnati Enquirer, bias does not have to be systemic within police departments to affect the way community members feel about law enforcement. Even a limited number of officers behaving inappropriately can have negative consequences. This was a crucial finding of a RAND study that looked at police-community relations in Cincinnati in 2001, when police shot and killed an unarmed black youth, leading to four days of rioting. The city was the subject of a lawsuit over racial profiling at the time of the violence.

It's important to note that authorities should be careful not to aggravate racial sensitivities, even when using types of profiling not mentioned by the Justice Department. A 2013 RAND report describes geographic and statistical profiling that routinely help law enforcement prevent crime by predicting where and when it will occur. Creating profiles based on risk factors such as the criminal backgrounds of individuals has also proven effective.

When it comes to homeland security, things get even more complex. The administration's new guidelines offer an exemption for Department of Homeland Security (DHS) officials as they screen incoming airline passengers and guard the borders. This may be necessary in some cases, but counting on profiling to identify all potential terrorists may be a mistake.

In his recent report “When Jihadis Come Marching Home,” Brian Michael Jenkins warns that the growing number of individuals going abroad to train “increases the available reservoir of Western passports and 'clean skins' that terrorist planners could recruit to carry out terrorist missions against the West.” A “clean skin” is an operative who is unknown to security authorities and who does not fit the profile of a terrorist.

Terrorists have long known about profiling and have taken steps to counter it over the years. In the 2007 report “Breaching the Fortress Wall” RAND researchers found that when it became clear authorities were using profiling to detect terrorists, terrorist groups turned to operatives who didn't fit the profile. An extreme example was the use of so-called proxy bombers—innocents compelled through threat to carry a bomb to its target—by the Provisional Irish Republican Army in its violent, decades-long campaign to force the British from Northern Ireland.

Like local law enforcement, security authorities at airports and other points of entry can make legitimate use of certain types of profiling. The Transportation Security Administration's pre-check program is a form of profiling that targets people with clean backgrounds who pose little risk. Authorities might also profile those who travel in suspicious patterns, like those who repeatedly visit destinations where terrorist training takes place.

And much of the screening of travelers conducted by the DHS focuses on immigration violations, like visa overstays, that by their very nature may require profiling by national origin. Other characteristics, like age and gender, might also increase risk for these kinds of violations and can legitimately be considered in some cases.

Ultimately, when police take action on the basis of race, creed, ethnicity or similar personal characteristics it is corrosive. It's unfair, ineffective and can stoke the flames of police-community tension. But as we have found from a variety of different assessments, law enforcement is best served when it bases its activities on risk—not on personal characteristics like race and ethnicity. Continuing to analyze and discuss these policies can only improve application and understanding.