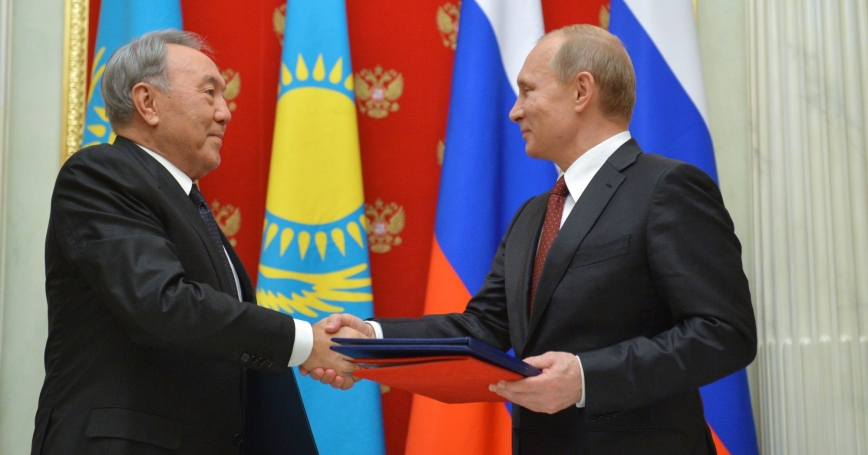 Russian President Vladimir Putin exchanges documents with his Kazakh counterpart Nursultan Nazarbayev during a meeting at the Kremlin in Moscow, December 22, 2014

Cheaper oil, government interference and market dynamics jeopardize the future of Russian and Caspian energy. To be globally competitive, the big four Eurasian producers—Azerbaijan, Kazakhstan, Russia and Turkmenistan—should let the private sector play a greater role and make more decisions on commercial, rather than political grounds.

“To prosper, the Eurasian energy sector must become more agile and efficient. This means removing politics from more energy decision making, and being clear-eyed about changing market forces.”

Eurasia is a hydrocarbon giant. Russia has the world's largest reserves of natural gas, and is in second place in coal and eighth in oil. Russia produces almost one fifth of global gas, and the second largest amount of oil, after Saudi Arabia (and soon America). Nearly one third of oil and gas consumed in Europe comes from Russia. In the bountiful Caspian Sea region: Azerbaijan is a large and reliable supplier of oil and soon gas to Europe; Kazakhstan's Tengiz field is the newest global "super-giant" to produce oil, and Kashagan is the largest oil field outside of the Middle East; and Turkmenistan has the world's fourth-largest reserves of gas.

Yet, the future of Eurasian energy is undermined by politics. Russia relies on a state-controlled gas export monopoly, Gazprom. Its output is stagnant, and Europe wants to move away from reliance on it. Due to oil-price-indexed contracts with European customers, Gazprom earnings will plummet. The company faces an EU legal challenge for anti-competitive business practices. Alternative gas markets in Asia are a decade away. Gas demand from Ukraine, once Gazprom's largest customer, will decline. Subsidies for consumption are to be cut and Ukrainians are outraged at Russian aggression. Oil production by state-controlled Rosneft is at a peak by cannibalizing the producing assets of other Russian companies—but the company is troubled. It seeks some $40 billion in government aid. Several energy companies and banks that help finance them are under Western sanctions, making it hard to roll over large foreign debt or borrow for expansion.

Prospects for Eurasian energy are also clouded because governments use exports as cash cows to fund their budgets. Eurasian producers have failed to leverage two decades of energy earnings to institutionalize reform and invest in human capital and infrastructure beyond the sector.

For these reasons, Eurasian producers should move to boost their energy competitiveness through market mechanisms and use export proceeds to modernize their economies....

This commentary originally appeared on The National Interest on January 14, 2015. Commentary gives RAND researchers a platform to convey insights based on their professional expertise and often on their peer-reviewed research and analysis.