Cost of College in the United States 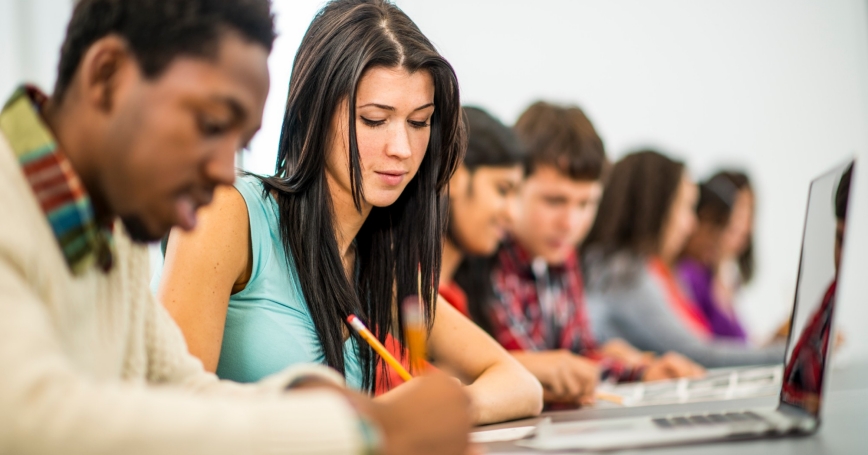 A Brief Description of the U.S. Higher Education System

High school graduates in the United States have a variety of options to choose from when considering post-secondary education, such as private institutions or public, state-funded ones, as well as two- and four-year institutions.

Two-year community, technical or junior colleges, for example, are often focused on teaching specific skills rather than general education. These schools confer associate's degrees, similar to certification from a trade school, and upon graduation, students are eligible to transfer to four-year institutions. According to the American Association of Community Colleges, there are currently around 1,200 two-year institutions in the United States, serving more than 11 million students. In addition to public community colleges, an increasing number of for-profit institutions have emerged recently, offering mainly associate-level degrees in practical subject areas, such as basic computing or accounting.

In the United States, however, four-year colleges and universities—which award bachelor's degrees for undergraduates, as well as master's and doctoral degrees for graduate students—represent the more typical undergraduate path for post-secondary education. They also represent a greater financial commitment for students and their families. Below, we look at recent cost trends facing students who attend a four-year institution.

While funding for four-year institutions varies—public institutions are financed by a combination of public and private sources, and private institutions rely predominantly on tuition and donations—over the past decade, students at both types of institutions have been faced with steep increases in tuition, mainly due to cuts resulting from the financial crisis. Other costs associated with college attendance, such as learning materials, transportation and housing, have also been on the rise.

This upward trend can be observed clearly when looking at the average annual costs (tuition and non-tuition) for students at both public and private four-year institutions. As Figure 1 shows, between the 2002/03–2013/14 academic years, annual costs for undergraduate education increased from $25,000 to $45,000 for private institutions. Even for students who lived at home and qualified for substantially reduced “in-state resident” tuition at public institutions, that figure rose from $10,000 to $20,000. While the latter option has for many years been viewed as the “affordable” option, incurring a minimum of $20,000 annually no longer seems possible for a lot of people in the United States.

According to a recent report issued by the College Board, between 1983 and 2013, tuition and fees for in-state students attending public four-year colleges increased by $6,324 compared to an overall increase in income for the middle 20% of U.S. families of $8,936 over that same timespan. This means that the increase in college cost for just one student absorbs as much as 71% of the rise in middle-class income over the past 30 years.

For middle- to lower-income families in the United States, in particular, the costs associated with attending a four-year university are becoming nearly impossible to bear. Consequently, more and more students are ending up with significant debt after graduating from college, putting financial pressure on them at the outset of their professional careers. In addition, students who decide to drop out of college, due to financial constraints or for other reasons, also frequently incur significant debt, without ever receiving a university degree. While education debt used to be an issue mainly among students pursuing graduate degrees or attending for-profit colleges, today, as many as 93% of students rely on at least some level of debt to graduate with a bachelor's degree, a number that has risen from 45% in 1993.

In the face of this sharp increase in college cost, students and families are forced to rely on a mix of sources in order to finance their undergraduate education. Most commonly, this includes university and industry scholarships and grants, repayable federal financial aid and commercial private loans, income from work study programs, education tax credits, and family savings. According to another recent College Board report, “parents and students covered 46% of total charges from funds other than grants and loans in 2002–03 and 43% in 2007–08; in 2012–13, they covered 38%. This decline has occurred as grants and tax benefits received by the average full-time postsecondary student have increased by 56% over the decade and borrowing increased by 36%, but funds from other sources rose by only 6% in inflation-adjusted dollars.”

While most schools have indeed increased the amount of needs-based scholarships and grants they provide in order to maintain diverse student bodies despite rising costs, a look at the breakdown of average undergraduate funding sources shows that this is by no means enough to protect students from incurring substantial amounts of debt in the form of loans. According to data from the College Board, students obtain an average of $70,000 in repayable, interest-bearing loans for their undergraduate education. While this represents a slight decrease from 2010–11, over the past 20 years, this value has increased by an astounding $60,000 (see Figure 2). Looking at the percentage breakdown of financing sources, it seems somewhat encouraging however, that since 2008, the portion of grants has been increasing compared to loans (see Figure 3). 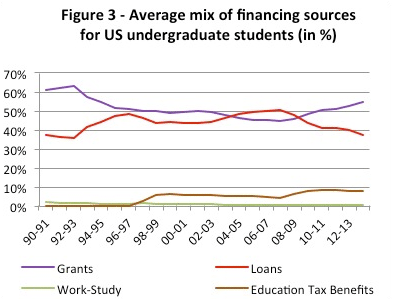 The Project on Student Debt, an initiative carried out by the Institute for College Access & Success, explains how these loans translate into student debt upon graduating from college. While an overwhelming majority of students will incur some debt over the course of their studies, the increase in the number of students with more than $40,000 in outstanding debt is most troubling. Among 1993 college graduates, an estimated 7,000 had student loan debt equal to or exceeding $40,000 and in 2006, this number had risen to an estimated 77,550 after adjusting for changes in college attendance. The analysis further shows that the increase in debt burden falls disproportionally on students in the lower income brackets.

Is There Still a Positive Return on Investment When Going to College?

A study conducted by Brand and Xie (2010) shows that the students who benefit most from a college education—that is, whose earning potential would be most dramatically affected—are the ones who are least likely to attend due to their socioeconomic background and academic achievement in high school. While such students still have a lot to gain from going to college, given the increasing cost burden associated with higher education in the United States, it has become imperative to think about college choice in a very practical manner. Correspondingly, a number of sources have emerged to supply incoming students and their families with tools to determine a potential return on investment for specific combinations of colleges and majors. Given the cost constraints and immediate financial pressure faced by many students upon college graduation, strategic choice of college and subject of study will become an increasingly important skill and will ultimately determine return on investment for going to college. Particularly with the rise of for-profit colleges and the emergence of thousands of options for pursuing post-secondary education, a blanket statement about positive returns to college can no longer be made.

Marlon Graf is an assistant policy analyst at the nonprofit, nonpartisan RAND Corporation and a doctoral candidate at the Pardee RAND Graduate School.

This commentary originally appeared on EduTech Magazine on January 12, 2015. Commentary gives RAND researchers a platform to convey insights based on their professional expertise and often on their peer-reviewed research and analysis.