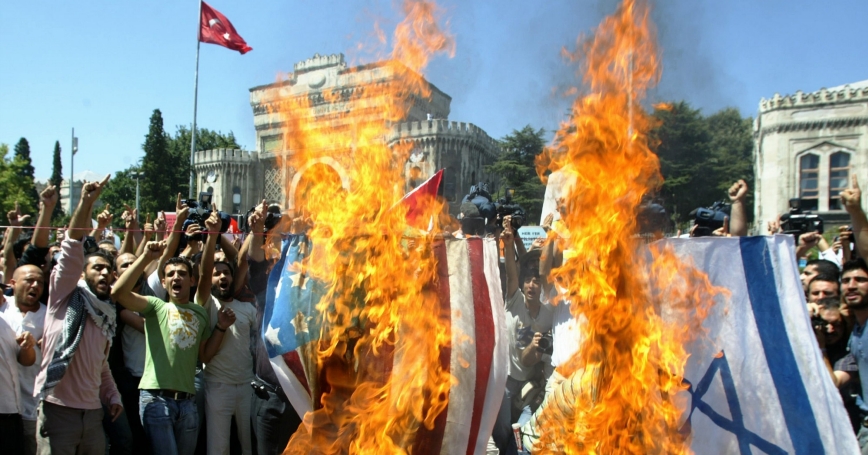 Protesters set fire to U.S. and Israeli flags to protest the Israeli offensive in Lebanon in front of Istanbul University after Friday prayers in Beyazit Mosque in Istanbul, August 4, 2006

Few nations have more experience with asymmetric conflicts than Israel and the United States. Both have succeeded in protecting their citizens, but at great cost and amid criticism from abroad and at home. On December 4, Brian Michael Jenkins, senior adviser to the president of the RAND Corporation, engaged in a discussion at the National Press Club in Washington, with Admiral Amichay Ayalon, former director of Shin Bet, Israel's security agency, on the dynamics of the changing security environment. They also discussed the use of military force in response to terrorism and the legal, ethical, and moral implications of this type of engagement.

Jenkins and Ayalon agreed that democracies confronting terrorism threats must balance security and civil liberties, and it is not just a matter of governments imposing security measures on citizens; publics often demand greater security and are willing to make trade-offs to achieve it. “A fearful society chooses security,” said Ayalon. Jenkins explained that the current security climate is likely here to stay. “Every democracy that has been confronted with the threat of terrorism changes the rules. The difference now is that we are looking at a situation that calls for a perpetual requirement for security,” Jenkins said. He added that there is a real concern that individual security measures will have a cumulative effect, permanently altering the security environment and public perceptions of risk.

Jenkins and Ayalon also addressed how operational activities synchronize with policy and international partnerships. There is a powerful cultural component to ongoing conflicts, and it is important to understand the motivations of those who fight, including those who leave democratic countries to join terrorist groups. “The biggest weapon in the terrorist arsenal has been the Internet, social media, and the ability to reach a global audience,” said Jenkins.

The evening event concluded a two-day workshop hosted by the RAND Center for Middle East Public Policy and the Israel Democracy Institute on the issues democracies face when addressing asymmetric threats. The workshop brought together Israel- and U.S.-based experts and policymakers, RAND donors and prospective donors, and members of the Washington policy community. James Kitfield, a senior fellow at the Center for the Study of the Presidency and Congress and a contributing editor at the National Journal, moderated the discussion. A podcast of the discussion is available on RAND's website.