State of the Union 2015: Clarion Calls on Terrorism, Cyber, Education, and More 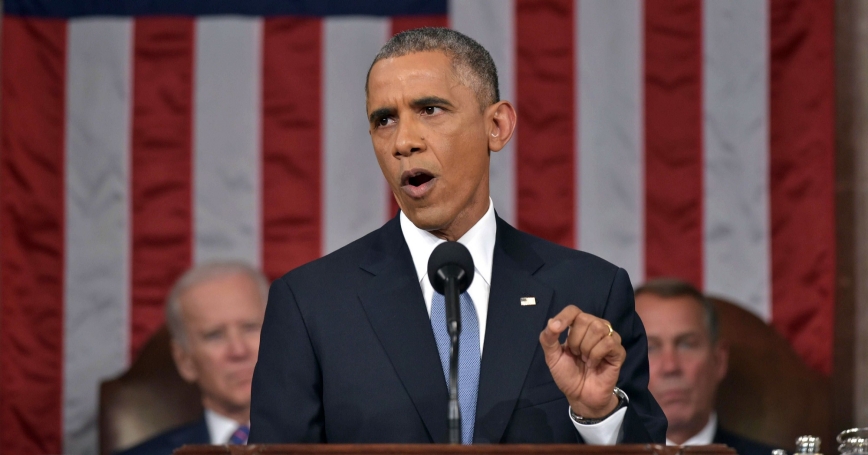 U.S. President Barack Obama delivers his State of the Union address to a joint session of Congress on Capitol Hill in Washington, January 20, 2015

Last night's State of the Union address may be most remembered for President Barack Obama's declaration that the “shadow of the [global financial] crisis has passed.” His statement comes with fewer Americans on unemployment rolls and consumers paying lower prices at the pump.

Of course, the agenda the president outlined for his final two years in office reached beyond the American economy. In fact, the plan can perhaps best be characterized as broad, mirroring the range of diverse and emerging issues facing the United States in 2015.

If policymakers are to develop effective solutions to these critical challenges, they'll need to draw on high-quality research, analysis, and expertise that are both objective and nonpartisan. Below are some excerpts from the president's remarks, followed by context provided by RAND work.

The Persistent Threat of Terrorism

“We will continue to hunt down terrorists and dismantle their networks, and we reserve the right to act unilaterally … to take out terrorists who pose a direct threat to us and our allies.”

Even before this month's bloodshed in the Paris offices of Charlie Hebdo or ISIS's sudden blitz across large swaths of Iraq and Syria last summer, evidence indicated a rising terrorist threat.

A June 2014 RAND report found a 58 percent increase in the number of jihadist groups and a doubling of jihadist fighters since 2010, indicating a need for a more adaptive U.S. counterterrorism strategy.

RAND experts have also discussed the importance of disrupting the terrorist safe havens that are contributing to the proliferation of foreign fighters, including many Westerners.

Regarding Syria's civil war, whose spillover effects are introducing challenges for neighboring states, experts have explored four alternative futures. Which future materializes in the region will have implications for ISIS's influence.

A New Era of Cybersecurity

“We are making sure our government integrates intelligence to combat cyber threats, just as we have done to combat terrorism… We need to better meet the evolving threat of cyber attacks, combat identity theft, and protect our children's information.”

After a 2014 that one RAND expert deemed “the year the hack went viral,” it was perhaps unsurprising that cybersecurity loomed large in the president's 2015 address.

RAND research indicates that black markets for the tools, services, and spoils of cybercrime are growing, maturing, and becoming more resilient. Among other possible solutions, disrupting these markets' business operations and tarnishing their reputations among malicious hackers could help.

There's a general perception that the United States has a shortage of cybersecurity professionals, particularly among federal workers in the intelligence and national security fields. However, researchers say the shortage is “largely a supply-and-demand problem” that market forces and existing programs will address in time.

“I am sending this Congress a bold new plan to lower the cost of community college—to zero. Forty percent of our college students choose community college… Whoever you are, this plan is your chance to graduate ready for the new economy, without a load of debt.”

Experts see two challenges that must be addressed to get the most out of the president's proposal for free community college. First, addressing the needs of underprepared students could help them avoid spending time and taxpayer dollars without graduating. Second, reducing transfer credit loss between institutions could improve student success and reduce the time it takes to get a degree.

The president introduced this plan by citing a need for Americans to expand their skills. According to research, “soft” skills, such as teamwork, communication, and grit, are important for college and career success in the 21st century. While these skills have proven difficult to measure, RAND experts have developed a plan to help schools understand if their instruction is effective at promoting them.

Addressing the Threat of Climate Change

“No challenge poses a greater threat to future generations than climate change… The Pentagon says that climate change poses immediate risks to our national security. We should act like it.”

The president referenced a recent deal between the United States and China—which research says needs to address its air-pollution problem soon—to limit greenhouse-gas emissions. As a bilateral pact between the world's two largest emitters, the agreement may mark a shift in international actions to slow climate change, which typically aim for consensus among scores of countries.

Building resilience can help communities bounce back from natural disasters that are becoming more common and costly due to climate change. RAND's new Water and Climate Change Resilience Center is working to help stakeholders bolster their communities against the effects of climate change, such as rising sea levels, droughts, and extreme heat.

“As a new generation of veterans comes home, we owe them every opportunity to live the American Dream they helped defend.”

As U.S. veterans adjust to civilian life, they face new challenges, as do their families. But communities may struggle to meet their unique needs. RAND conducts research that drives ongoing support to veterans and military families in key areas, including health and well-being, education, and family support.

The president issued a specific endorsement of former servicemembers as potential private-sector employees: “If you want somebody who's going to get the job done, hire a veteran.” A new RAND study suggests that employers see many benefits to hiring veterans, but they may need help understanding and translating military skills to civilian settings.

Iran and Russia: An Emphasis on Diplomacy

“We are demonstrating the power of American strength and diplomacy. We're… opposing Russian aggression, supporting Ukraine's democracy, and reassuring our NATO allies… There are no guarantees that negotiations [with Iran] will succeed, and I keep all options on the table to prevent a nuclear Iran. But new sanctions … will all but guarantee that diplomacy fails.”

While Moscow may still have options to recover from its economic and strategic decline, the ruble is indeed plunging. According to experts, this creates a window for diplomats to deescalate the war in Ukraine by offering President Vladimir Putin a comprehensive deal.

Even after many stops and starts, says one RAND expert, it's doubtful that nuclear talks between Iran and the P5+1 would've come so far if there weren't a decent chance of a deal. As the talks continue, experts are looking ahead to the days after a deal, examining how a nuclear agreement would impact policies in the region and toward the United States, how Iran's neighbors would respond, and U.S. policy.