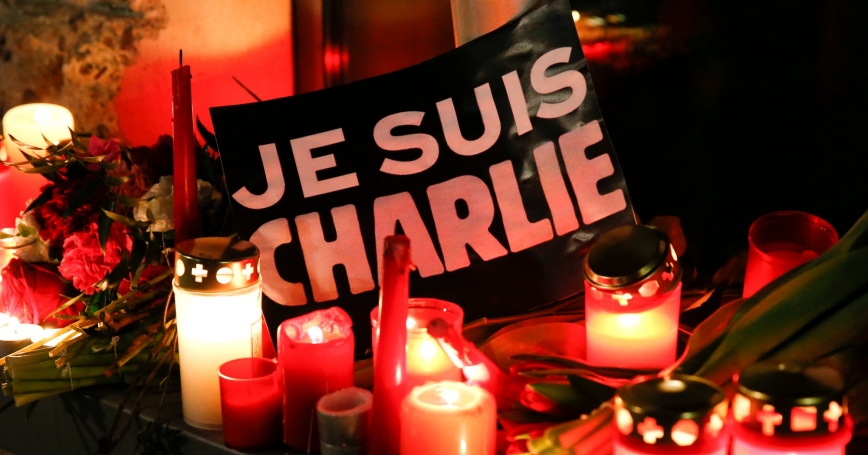 Candles and a placard that reads 'I am Charlie' at the French embassy in Berlin, January 7, 2015, tributes to victims of a shooting at the offices of satirical magazine Charlie Hebdo in Paris

The attack by a pair of gunmen that claimed the lives of 12 people in the offices of a Paris-based satirical magazine sent waves of terror and disbelief across France today. Carrying assault weapons and shouting Islamic slogans, the masked killers struck the offices of Charlie Hebdo, a magazine long targeted by Islamic militants for publishing cartoons depicting the Prophet Muhammad. Among the dead: cartoonists, members of the magazine's editorial staff and two police officers.

How does this attack compare to previous attacks in France?

Brian Jenkins: This is not just the worst terrorist attack in 20 years. The number of fatalities surpasses the 1995 attack at the subway station, indeed the fatalities of the 1995-96 terrorist campaign. (The 1995 bomb attack killed eight people and wounded dozens more in a Paris Metro station. It was one of a series of attacks alleged to have been carried out by the Armed Islamic Group in 1995 and 1996.) It surpasses the violence of the mid-80s campaign and the terrorist attacks of the 1970s. It takes us all the way back to the bloody terrorist campaign in Paris during the Algerian War. (In 1961, a terrorist bomb, planted by extremists who wanted to keep Algeria French, killed 28 people aboard a Paris train.) It will deeply affect all French people.

Stephanie Pezard: The most recent terrorist attacks that come to mind in France are the killing of seven people (including three children at a Jewish school) in three separate attacks, perpetrated by Mohammed Merah in 2012. Unlike Merah's attacks, the one against Charlie Hebdo seems to have been organized by a group and to have required more elaborate planning. It was also preceded by threats against the victims. Both attacks, however, were shootings, which is a marked difference from the bombings that France experienced in the 1990s.

Why would terrorists strike a magazine?

Andrew Liepman: This publication has been near the top of the list of targets—perhaps second only to Jyllands-Posten in Denmark—for insulting the Prophet Muhammad.

Pezard: Charlie Hebdo is a satirical magazine that routinely publishes cartoons that poke fun at religions. This magazine and its staff had been under threat since they published the caricatures from the Jyllands-Posten in 2006. In 2011, a firebomb was thrown into the magazine's offices and destroyed them entirely.

Does this attack fit the pattern of recent terrorist attacks?

Liepman: This is fundamentally different from the recent attacks in Australia, Canada, and New York, which were so-called “lone-wolf” attacks. This was a well planned attack versus random, by a cell rather than an individual. It was clearly targeted for specific political motives. (Among recent lone-wolf attacks: On Dec. 15, three people were killed after a hostage standoff at Lindt Chocolate Café, in Sydney, Australia; on Oct. 22 an Islamic convert stormed Parliament Hill in Ottawa, Canada, and killed a soldier; and on Oct. 23 a radicalized Islamic convert was killed after he attacked police with a hatchet in New York City.) First impressions suggest these guys were relative pros, as compared to what we've become accustomed to with lone wolves. These guys were trained and disciplined, had a plan and executed it. It is also interesting that this seems not to have been a suicide mission—unlike what we've come to understand is typical of operations affiliated or loosely connected with al Qaeda. They seemed to plan their escape—again, something that is not typical in recent operations.

Jenkins: Andy is correct that this is not a random attack by another lone wolf, but a well planned operation that succeeded. It will, however, be seen in the context of increasing terrorist attacks and interrupted plots as evidence of a growing terrorist threat. The attack will also be framed in the context of previous attacks by Islamist extremists dating back to Iran's Ayatollah Khomeini's 1989 fatwa against British author Salman Rushdie for his depiction of the Prophet in his book The Satanic Verses. Rushdie kept out of sight, but bookstores and newspapers were bombed and the book's publisher was shot. The 2005 publication in a Danish newspaper of cartoons of the Prophet prompted violent protests worldwide, several assassination attempts and terrorist plots. The cartoonist still lives under police protection.

Pezard: In its method and target, today's attack is reminiscent, on a smaller scale, of the killing in Norway of 68 members of the Norwegian Labor Party's youth camp by Anders Behring Breivik. In both cases, it was the planned and systematic shooting of a group of people for political motives.

What do the terrorists stand to gain from such an attack?

Liepman: Whoever did this—whether followers of ISIS, or, more likely, al Qaeda—will likely burnish their credentials and gain in popularity among even non-militant Muslims. Many in the Muslim world abhor what this publication did, desecrating the image of Muhammad, and while they will regret the killing, they would approve the legitimacy of the target.

Pezard: It shows that their threats can be taken seriously. They said they would kill Charlie Hebdo's director Stephane Charbonnier (“Charb”) and they did. This will bring them applause from a number of other militant Muslims, but they are also likely to antagonize the larger group of non-militant Muslims. The French highest Muslim authorities have always condemned such attacks, and I expect that a very large number of French Muslims will be taking part in the spontaneous gatherings tonight that pay tribute to the deceased journalists.

What could it mean for Muslims around the world?

Jenkins: Without endorsing murder, the event will win applause among many in the Muslim community, but it will also fuel growing anti-Muslim and anti-immigration sentiments, which are already an important political factor throughout Europe. It will lend weight to the assertion that Muslims will never assimilate Western values, but will remain violently intolerant. This a societal problem that transcends terrorism. Unfortunately, despite renewed defiant expressions that terrorism will not limit freedom of expression, many publishers, newspapers, and booksellers may for reasons of safety avoid publications that extremists might consider offensive.

Pezard: Today's attack is likely to fuel anti-Muslim sentiment in France and in Europe, particularly as it is coming at a time when far-right parties are on the rise in most of Europe and a country like Germany is already seeing large anti-Muslim protests.