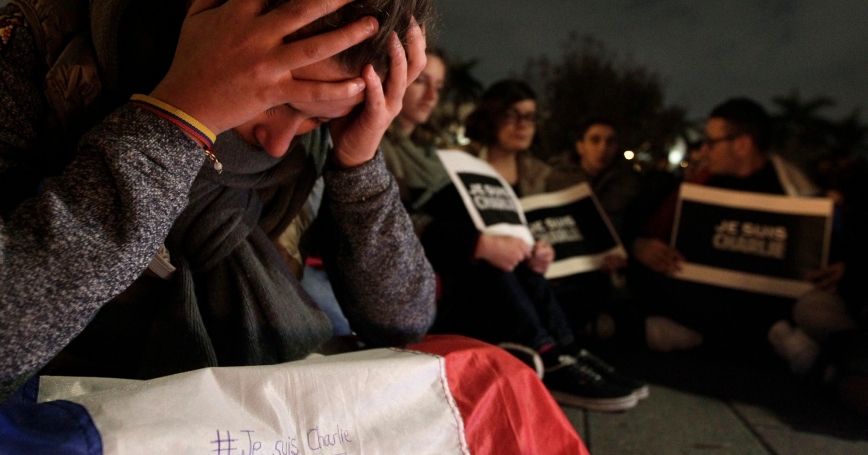 A woman with a French flag with the words 'I am Charlie' reacts while paying tribute to the victims of a shooting at the offices of French weekly newspaper Charlie Hebdo in Paris, during a candlelight vigil at the Liberty Square in Taipei, January 9, 2015

The bloodshed in the Paris offices of satirical magazine Charlie Hebdo was much more than a violent act of revenge against a publication that offended many Muslims. The wave of terror that began in the magazine offices on Wednesday and ended as police stormed two locations on Friday where three gunmen had taken hostages was, at the same time, a startling reminder of al Qaeda's ambitions, capabilities, and ruthlessness.

The individuals who perpetrated the attack on Charlie Hebdo appear to be associated with Al Qaeda in the Arabian Peninsula (AQAP), a group that clearly would benefit from an outrageous and shocking act on behalf of its global brand. If the attack was indeed AQAP's doing, it would add new luster to its reputation as one of the world's most dangerous and aggressive al Qaeda affiliates.

Whether or not the attack was planned as a marketing device to help al Qaeda emerge from the expanding shadow of its rival the Islamic State, it may be having that effect. Selecting a target that had long fanned the flames of outrage among Muslims worldwide sent a message that al Qaeda is still avenging perceived wrongs against Islam. And striking in the heart of a major European capital during the middle of a workday demonstrated anew the ever-present threat posed by al Qaeda.

The rise of the Islamic State and the rejection of al Qaeda's authority by its “caliph,” Abu Bakr al-Baghdadi, has set up a fierce competition with al Qaeda for leadership of the global jihadist movement. The Islamic State's successes—the seizure of a large part of Iraq and Syria, including Mosul, Iraq's second largest city, and its declaration of a “caliphate,” a key goal of Islamists for over 90 years, has put al Qaeda on the defensive. This competition has created incentives for both groups (but especially for al Qaeda) to demonstrate their jihadi credibility through attacks against infidel countries.

For months, the Islamic State has been portrayed as the dominant jihadist enterprise, attracting supporters from around the world with its extreme violence, ceaseless threats against infidels and the promise of an Islamic caliphate for the ages. If al Qaeda was seeking a recruiting tool to help it compete for followers, it would have to be spectacular. The Charlie Hebdo attack would certainly do.

As terrorism expert Brian Michael Jenkins has said, “terrorism is theater.” It is not so much about the violence itself, but about delivering messages and influencing key audiences. In this case, the message was delivered with the report of Kalashnikov rifles that were heard around the world, resonating especially in far-flung Muslim communities.

These are audiences that had already reacted violently to unflattering portrayals of the Prophet Muhammad in Western media. When the Danish newspaper Jyllands-Posten published unflattering cartoons of Muhammad in 2006, riots broke out in Muslim countries and hundreds were killed. The choice of France, a country that has been at the forefront of the campaign against al Qaeda affiliates in sub-Saharan Africa and other parts of the world, as the target country, sends another message.

The violence brings into relief for Western publics and policymakers the uncomfortable truth that while al Qaeda may have been degraded in the years since the 9/11 attacks, it is still a force to be reckoned with and its affiliates and other groups associated with its ideology pose a greater threat than ever.

The response must go beyond enhanced counter-terrorism and security measures to include strategies to counter the terrorists' message. Only Muslims themselves have the credibility to challenge the extremist message. Western societies have important social resources such as moderate Muslim organizations and communities to reduce the risk of radicalization and violent extremism.

Winning this war of ideas should start with a coherent effort to support Muslims around the world who believe in the compatibility of Islam with democratic values. When Islam and democratic values coexist, the terrorist message fails.

Angel M. Rabasa is a senior political scientist at the RAND Corporation.

This commentary originally appeared on USA Today on January 9, 2015. Commentary gives RAND researchers a platform to convey insights based on their professional expertise and often on their peer-reviewed research and analysis.