Armed Drone Myth 1: They Will Transform How War Is Waged Globally 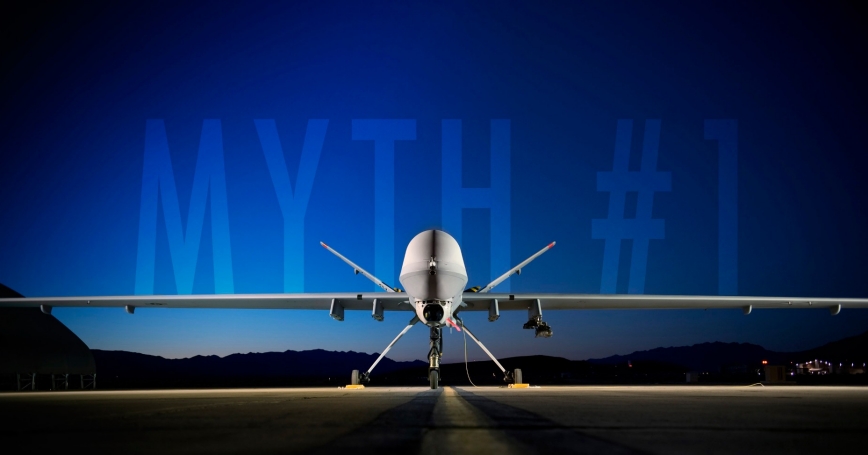 An MQ-9 Reaper sits on the flightline at Creech Air Force Base, NV, photo by Lance Cheung/U.S. Air Force

In this, the first in a series of blog posts aimed at dispelling some misconceptions about drones, we examine the myth that armed drones are transforming warfare. For background on our analysis, see this report.

As the fight against terrorists has expanded to include the Islamic State, so too has the use of long-range military drones. However, unmanned aerial vehicles (UAVs), as they are also known, are fundamentally misunderstood. Their champions wrongly contend they are revolutionizing warfare, while critics fear their spread would greatly increase the threat that China, terrorists, and others pose.

A number of policymakers and experts have described armed drones as revolutionizing “the way nations conduct war,” putting their development in the same category as the advent of air power or even the atomic bomb. If armed drones are indeed revolutionary, their presence on one side but not the other would decisively tilt the battlefield in favor of their possessor. But this is not the case given the vulnerability of long-range armed drones to air defenses. Moreover, the United States and its more advanced allies possess other systems that offer similar, though not identical, capabilities to defend against drone attacks.

To be sure, this conclusion could change with technological advances in automation, miniaturization, stealth, and other fields. Swarms of “smart drones” acting autonomously to overwhelm air defenses could prove to be truly transformative weapons. But such capabilities, if they ever exist, will be transformative because of their autonomous systems more than the unmanned platforms that carry them.

Using long-range armed drones against targets in Syria is succeeding because Syria's air defenses have not been employed. In a U.S.-China confrontation, current armed UAV systems would be shot down in moments. If Iran tried to use an armed UAV to target Saudi Arabia, it would be unlikely to succeed because of sophisticated Saudi air defenses. This would be the case even if Iran developed a high capacity to use drone platforms.

Armed drones are more transformative against insurgent movements or others that lack even basic air defenses. In these cases, the greater precision and loiter time of armed drones, as well as lower cost, can change the battlefield in favor of the counterinsurgent by enabling targeting that would otherwise be too risky or too costly. The United States has not, however, gained victory over the Taliban despite using Predator and Reaper drones on a regular basis. France could have benefited from using long-range armed drones in its fight against the jihadist insurgency Ansar Dine in 2013, but it achieved success through the use of attack helicopters, fixed wing aircraft, and its special forces.

Terrorists attack primarily to terrorize or affect morale, rather than to advance their overall operations in a traditional military sense. So they could find short-range armed drones an attractive way to target Americans overseas or even in the United States. But many of the capabilities of armed drones of all sizes can be found in other weapons systems. For terrorist groups, suicide bombings or IEDs would be simpler and more effective. Many of these are proven tactics and most are much easier to deploy. The most efficient weapon for a terrorist intent on causing casualties is probably a conventional explosive bomb.

Even if interested in armed drones, it is not likely that terrorists would be able to develop more than a limited capacity to use them effectively. This is also true in terms of adapting armed drones to deliver WMD, since the challenges are magnified while the benefits relative to other means of delivery are questionable. It is noteworthy that outside Hezbollah, which is more a mini army than a classic terrorist group, terrorists in general have not taken serious steps to acquire these systems. While unsuccessful in attacks against Israel, Hezbollah reportedly used drones to destroy al Qaeda-affiliated Nusra Front targets along Lebanon's border with Syria.

The benefits and limits of long-range armed drones suggest they offer their users significant capabilities, but are only transformative in rare circumstances. They are operationally attractive in the fight against al Qaeda and the Islamic State but are best viewed as conventional weapons such as aircraft.