Don't Worry About Russia Backing Away from Space and WMD Cooperation 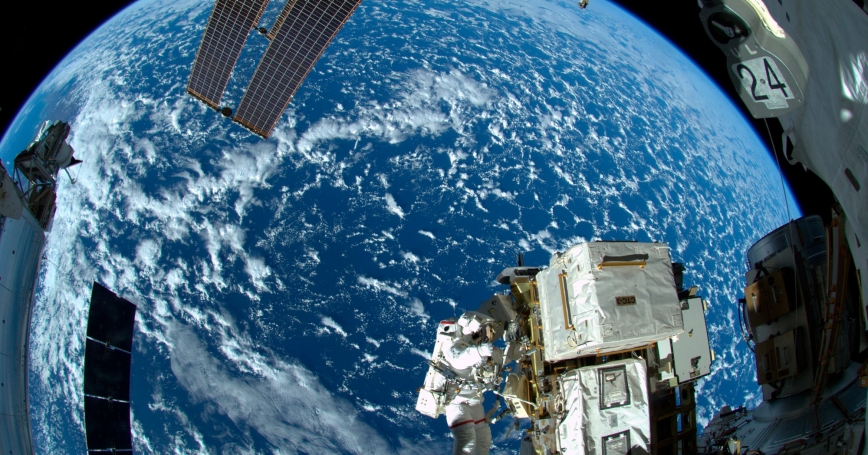 Two important symbols of U.S.-Russian cooperation are nearing the end of their life expectancies, the International Space Station and the Nunn-Lugar Cooperative Threat Reduction Program. That's not necessarily a bad thing.

Both the station and Nunn-Lugar stand as remarkable milestones of achievement and concrete reminders of what can be accomplished when two of the most powerful nations on earth put aside political differences for the betterment of humanity. And today, at a time when U.S.-Russian relations are being tested, such post-Cold War cooperation could provide inspiration even as the space station and threat reduction pact are about to take their places in the history books.

The International Space Station was born out of negotiations between the United States, Canadian, Japanese and European space agencies during the 1980s. The goal was to establish a low-orbital platform for space exploration and terrestrial-bound discovery. (Who knew roundworms in space could help solve muscle and bone loss on Earth?) Russia came on board during the early 1990s and the Russian space agency quickly became a critical component for the space station's functionality, providing the propulsion system to maintain proper altitude, fuel and water resupplies and as the sole source for crew transportation aboard its Soyuz spacecraft.

Yet Russia said this week it will end its involvement with the station in 2024. Russian leaders had been dropping hints lately that they would abandon this joint endeavor after 2020, at least partially in response to the United States' suspension of non-station-related cooperation following Russia's annexation of Crimea.

But this is not the only reason. Russia is also responding to recent equipment failures and exterior panel damage that raise questions regarding the durability of the space station and practicality of investing in maintaining operations beyond its original lifespan. As a result, Russia is exploring options for building an independent space station better suited for its future space ambitions, though it remains to be seen whether Moscow has the wherewithal to financially support it. NASA, meanwhile, is looking to private industry to develop transport vehicles to give astronauts a lift by 2017. This may be a more sustainable business model for U.S. stakeholders, and eliminate U.S. reliance on Russia for transportation to the space station.

The Nunn-Lugar agreement, meanwhile, was a worthy example of U.S.-Russian collaboration on Earth. Concerns over the potential proliferation of weapons of mass destruction materials led to an impressive record of cooperation between the United States and Russia following the disintegration of the Soviet Union and subsequent disaggregation of control over its nuclear arsenal. Over the course of two decades, myriad U.S. agencies operated under the Nunn-Lugar Cooperative Threat Reduction Program to help eliminate or secure thousands of weapons, delivery systems and associated materials in Russia and other former Soviet countries. The program also sought to keep nuclear scientists employed and thus less tempted to sell technological know-how.

Similar to the space station's precarious situation, Russia appears no longer interested in renewing the formal agreement that stood as a concrete symbol of U.S.-Russian commitment to reducing the threat of weapons of mass destruction.

On the surface, this decision appears to be yet another victim of terrestrial consternation over Ukraine and has prompted some arms control experts (including formers Sens. Sam Nunn and Richard Lugar themselves) to lament that the initiative “has become the latest casualty of the spiraling crisis in relations among the United States, Europe and Russia.” But a closer look at why Nunn-Lugar is coming to an end reveals a different picture.

The Nunn-Lugar initiative technically expired in 2013. However, arrangements such as the Initiatives for Proliferation Prevention, the Nuclear Cities Initiative and the Multilateral Nuclear Environmental Program in the Russian Federation Agreement have enabled the U.S. State Department and U.S. Department of Energy to continue the progress. These programs help to: secure and eliminate radiological sources and spent reactor fuel; convert nuclear reactors to use low enriched uranium rather than highly enriched uranium; enhance customs and border security against nuclear trafficking; and retool nuclear facilities and their employees for commercial opportunities.

The major source of anxiety for arms control experts is that the expiration of Nunn-Lugar signals that the Russian Ministry of Defense is no longer interested in U.S. military assistance with dismantling and securing its strategic nuclear arsenal and chemical and biological weapons complexes. But this actually seems like an appropriate decision on Russia's part, since much of the former Soviet military stockpile has already been secured or eliminated and the United States can verify and monitor continued Russian progress through the New Strategic Arms Reduction Treaty and other bilateral and multilateral arms control treaties. And, after 20 years of U.S. assistance, the Russians should be much better prepared to take full responsibility for their weapons custodianship.

The real issue of concern is not whether the Russians have the capacity, but whether they will remain committed to maintaining a vigorous nuclear safety and security climate with the capacity now built. A former national lab official recently argued that, "you're never done. ...They need continuous attention and international cooperation." But with budget constraints and competing security priorities, the U.S. military cannot expect to maintain the level of effort it has expended in Russia indefinitely.

That said, U.S.-Russian military cooperation has strategic importance in other areas. Nunn-Lugar's termination means both countries can focus joint efforts on other partner nations considered frontline risks for proliferation in the Middle East, Africa and Asia. Depending on how U.S.-Iranian nuclear negotiations pan out, there may be a role for U.S.-Russian cooperation in dismantling and securing Iran's sensitive nuclear materials sometime down the road. The Department of Defense may want to focus attention toward planning and preparation in this regard.

Looking back, there are a number of striking parallels between the Nunn-Lugar initiative and the International Space Station. Both were established during the early post-Cold War years despite uncertainty regarding how the two major powers would define their relationship moving forward. Both operate in sometimes unstable environments. The station is subjected to space debris and struggles with malfunctioning systems and noxious gas leaks. Safe transportation, storage and destruction of weapons came with some equally unsettling risks. Both endeavors have also become political footballs of late, but could survive in some capacity with contributions from the private industry or other U.S. agencies.

One need look no further than Ukraine for signals that the relationship between Washington and Moscow has chilled significantly lately. But the demise of the space station and the Cooperative Threat Reduction Program should not necessarily be taken as more evidence of this. The legacies left by these 1990s initiatives should be seen as models of how cooperation can succeed, rather than as indications of a relationship in decline.

Lisa Saum-Manning is a political scientist at the nonprofit, nonpartisan RAND Corporation.

This commentary originally appeared on U.S. News & World Report on February 27, 2015. Commentary gives RAND researchers a platform to convey insights based on their professional expertise and often on their peer-reviewed research and analysis.