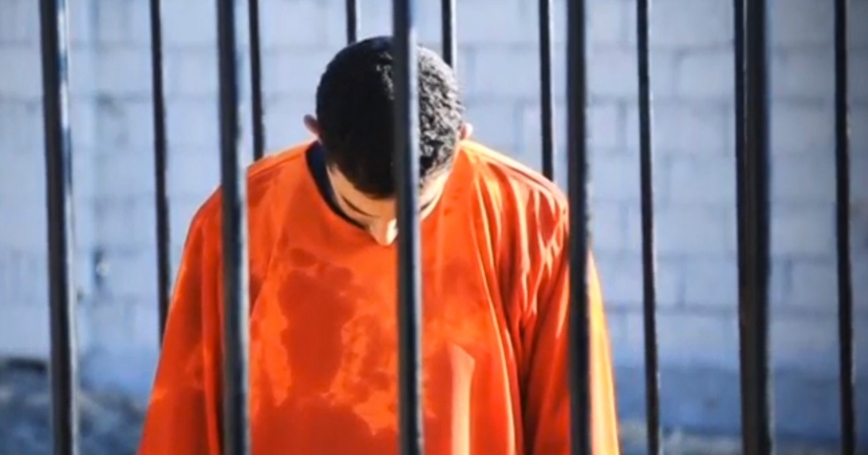 A man purported to be ISIS captive Jordanian pilot Muath al-Kasaesbeh in a cage in a still image from an undated video filmed from an undisclosed location, made available on social media on February 3, 2015

Barbaric, savage, heinous, horrific—the decision by the Islamic State in Iraq and Syria (ISIS) to murder its Jordanian hostage by burning him alive inspired a thesaurus of horror and revulsion. The perpetrators were described as thugs, mad men, monsters. To most, the act seemed inexplicable. But behind the choreographed and videotaped violence lies a terrible logic.

Although some alarmed American officials portray it as a mighty force, ISIS, like all terrorist organizations and most guerrilla armies, is militarily weak by conventional measure. It has little defense against the air armada currently pounding it. ISIS seeks to make up for its weakness through displays of ferocity that slam the sensitivity of its foes. For terrorists—and for some governments increasingly constrained in applying military power—war is more about the manipulation of perceptions, which is what terrorism is all about.

Through dramatic acts of violence, terrorists create an atmosphere of fear and alarm that causes people to overestimate the threat. Some terrorists do this through random attacks, making it appear that no one is safe. ISIS has limited capability to do this abroad, so it instead advertises its viciousness through extreme cruelty at home.

The execution of the captured pilot, who came from a powerful Bedouin tribe, has shocked and angered Jordanians. They demand and expect revenge. The Bedouin tribes are stalwart supporters of the Hashemite dynasty, and they run Jordan's army. Jordan is a modern state, but this is about a king, who once commanded Jordan's special forces, and his loyal warriors. Given his dependence on the tribes, the king's decision to immediately execute two jihadist prisoners is understandable. That will temporarily appease passions, but it will not be enough. It will buy time while Jordan looks for a way to inflict real pain on ISIS, probably not by immediately sending Jordanian tanks into Syria or Iraq—that would be a more Western reaction.

The act of terror, however, will also exacerbate tensions within Jordanian society. When anger cools, some in Jordan and elsewhere in the Arab world will undoubtedly displace culpability for the tragedy to the king and the United States. In the view of these people, everything is ultimately America's fault. The pilot's death is the price Jordan paid for going along with an American-led bombing campaign. Arabs should not kill Arabs, Muslims should not kill Muslims, Sunnis have no business killing Sunnis, especially on behalf of American infidels, the reasoning goes.

If the killing of the Jordanian pilot provokes escalating retribution and revenge, increasing the viciousness of the conflict, Western governments will face further discomfort. International humanitarian law and public sensibilities put them in a situation in which responding to increased brutality in kind is not an option. The West may secretly welcome but cannot participate in the ways scores may be settled.

Expressions of sympathy and solidarity from the West may conceal political concerns. Beheadings have already caused political crises in Western capitals and, most recently, in Japan. In response to the latest atrocity, many will call for the eradication of ISIS, but the prospect of hostages being burned alive increases the political risk of deeper involvement. Death by videotaped beheadings and burnings can achieve the same effect as losses on the battlefield.

The terrible fate of the Jordanian pilot will also increase ISIS's leverage in future hostage negotiations. The governments of the United States, the United Kingdom and Japan assert that they will not pay ransom or make other concessions to terrorists holding hostages, but other governments do make concessions. Jordan had already signaled its willingness to release prisoners in return for the release of its pilot and a Japanese hostage, although ISIS apparently had already murdered the pilot before the negotiations began.

Killing the pilot by burning him alive, then crushing his body under rubble, appeals to both ISIS's internal and international constituencies. Its fighters face an aerial bombing campaign against which they have few defenses. Reportedly, thousands of fighters have been killed since the campaign began. Delivering what they see as a similar form of death to a captured enemy pilot is aimed at providing morale-lifting symmetry. The spectacle satisfies notions of eye-for-an-eye punishment, although almost all Islamic scholars have condemned this mode of killing. Denunciations by those whom ISIS cares nothing about have no effect.

Moreover, the vicious executions are not just about getting even. ISIS has from the beginning advertised its savagery in order to recruit the most determined and most violence-prone volunteers from the region and beyond. These recruits now constitute a large portion of ISIS's fighters, enough to change the character of the organization. Through self-selection, continued fighting and the exaltation of unlimited violence, ISIS has created a cult whose members command and revel in displays of ever-increasing cruelty.

ISIS's killing of the Jordanian pilot may turn out to be a strategic miscalculation, but it is not madness.

Jenkins is senior adviser to the president of the nonprofit, nonpartisan RAND Corporation and the author of The Dynamics of Syria's Civil War.

This commentary originally appeared on The Hill on February 10, 2015. Commentary gives RAND researchers a platform to convey insights based on their professional expertise and often on their peer-reviewed research and analysis.