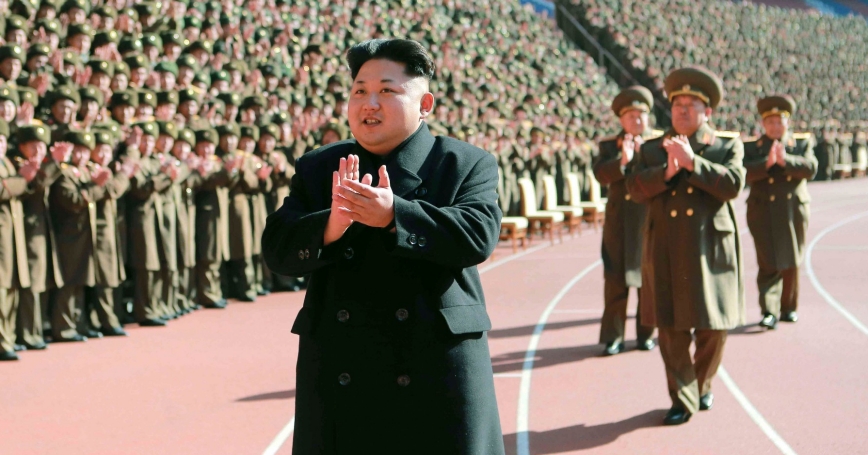 North Korean leader Kim Jong-un claps during a photo session at a meeting of military and political cadres in this undated photo released by the KCNA, February 2, 2015

In 1938, then British Prime Minister Neville Chamberlain returned from peace negotiations with Nazi Germany declaring that he had achieved “peace for our time.” This “peace” was to be accomplished at the price of giving Germany control over the Sudetenland of Czechoslovakia. Sadly, less than a year later, Adolf Hitler's Germany invaded Poland when it would not surrender to German territorial demands. Germany had finally started a real war, World War II.

What Chamberlain appeared to miss is that the German objective was not to achieve “peace,” but rather to diplomatically undermine the strength and sovereignty of its neighbors en route to German dominance of Europe. For Hitler and other Nazi leaders, negotiations were an alternative means of waging war.

North Korea insists on not having to meet preconditions before restarting the Six-Party Talks. Yet the North is insisting that South Korea, in particular, meet preconditions for other negotiations with the North. Is North Korea really sincere about wanting to negotiate improved relations with South Korea and the United States, or is it seeking to undermine the strength and sovereignty of its neighbor, just as Germany did before World War II?

There is, of course, value to negotiating with any state, including North Korea, in part to test whether there is any possibility of peace and improved relations. President Park Geun-hye has properly argued that negotiations with the North will be useful to build trust and test the trustworthiness of the North. But there is little to be gained by meeting North Korean preconditions given the North's history of not being trustworthy and its current hypocrisy. It is North Korea's turn to demonstrate that South Korea and the United States should trust it. If the North is unprepared to demonstrate its sincerity, what chance is there that negotiations will amount to anything more than Kim Jong-un's effort to wage war by another means? Does North Korea seek peace for our time, or dissolution of the South Korea-U.S. alliance en route to conquest of the ROK?

This commentary originally appeared in The Korea Herald on February 3, 2015. Commentary gives RAND researchers a platform to convey insights based on their professional expertise and often on their peer-reviewed research and analysis.