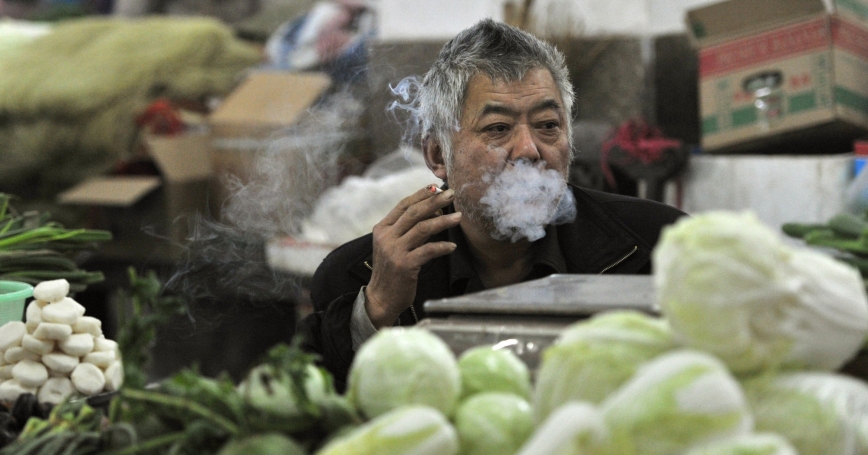 A vendor smokes a cigarette as he waits for customers at a market in Hefei, China, January 9, 2015

China is home to nearly one-third of the world's smokers: more than 300 million of them. That's not much less than the total population of the United States. Since 2006, overall smoking rates in China have remained static at about 25 percent. Every year, approximately 1.2 million Chinese die from tobacco-related diseases, and about 100,000 more perish from the effects of secondhand smoke. If these trends continue, tobacco-related casualties in China will reach 3 million per year by 2050.

To help address this health crisis, China's parliament is considering a ban on all tobacco ads except those at point-of-sale retail locations. How does this compare to the current state of play regarding Chinese tobacco ads? And could the new law shift the tobacco-control landscape?

Current laws ban direct tobacco advertising at the national level. But major loopholes allow for carefully constructed “stealth” marketing. For example, an enormous billboard at the Changyang Road of Shanghai reads “Ai Wo Zhonghua,” which can be interpreted as “love my China (Zhonghua)” or “love my Zhonghua cigarettes.” The billboard even resembles a pack of Zhonghua smokes. Unsurprisingly, nearly 50 percent of Shanghai smokers and 40 percent of nonsmokers thought of Zhonghua cigarettes when surveyed about the meaning of “Ai Wo Zhonghua.”

Another common approach is infiltrating societal institutions through charitable contributions that are necessary to sustain them. One of the most striking examples of this are tobacco-sponsored schools in poor regions. At the gates of the Sichuan Tobacco Hope Elementary School, for instance, the following motto appeared: “Talent Comes from Hard Work, Tobacco Helps You Succeed.” The school name was changed after a wave of negative publicity. Nonetheless, there are still more than 100 schools in China sponsored by and named after tobacco brands, according to the ThinkTank Research Center for Health Development.

Data indicate that this level of intensive tobacco marketing has paid off. Sixty-one percent of survey respondents supported allowing tobacco companies to make donations to charitable causes, and 32 percent felt more positive about a tobacco company due to its charity. Only 27 percent (PDF) of Chinese are aware that smoking poses risks for stroke and coronary heart disease. Sharing cigarettes is regarded as a sign of respect and friendliness; 47 percent of Chinese smokers have given cigarettes as gifts. Nine out of ten Chinese children can name at least one tobacco brand. And exposure to tobacco advertising is known to contribute to smoking behavior.

If China's new ban is passed, these stealth-marketing practices will become illegal. However, no matter how comprehensive the ban, the law's provisions may be very difficult to implement and enforce.

Why? One reason is the tobacco industry's prominent role in China's economy. In 2013, it contributed 816 billion yuan, or about 6 percent of China's total fiscal revenue. The tobacco industry's net benefit—revenue minus associated social costs (e.g., medical costs, productivity losses)—has been negative (PDF) since 1999. But the uneven distribution of revenues and costs across regions and stakeholder groups makes tobacco control a complicated topic both economically and politically. For example, on the one hand, medical costs and productivity losses affect the entire country. On the other hand, the tobacco industry is considered “the pillar of the economy” in some provinces. Indeed, the tobacco industry contributed 33 percent of the public budget income of the Yunnan province in 2013. There are more than 20 million tobacco-related jobs nationwide, including those of 1.3 million peasants and 5 million individual retailers. With China's economic slowdown after decades of high-speed growth, and the increasing pressure on unemployment and resulting social unrest, the Chinese leadership may consider aggressive tobacco control too politically risky.

Another major barrier for tobacco control is China's regulatory and leadership structure. The State Tobacco Monopoly Administration, which is responsible for tobacco control affairs in China, and China National Tobacco Corporation are the same organization with two different names. This means that the same officials in charge of tobacco control are also in charge of its production and sale. The current prime minister, Li Keqiang, is in charge of the public health system, while his brother, Li Keming, serves as deputy director of the tobacco administration. This arrangement may conceivably create implementation problems.

Despite these daunting challenges, however, there is hope. New leadership seems to have taken a dramatically hardened stance toward tobacco use. In 2012, the Central Party School published a report titled "Tobacco Control: International Experience and China's Strategy." The report was developed while China's current president, Xi Jinping, was the school director. Xi's wife, Peng Liyuan, serves as an anti-smoking ambassador for the Chinese Association on Tobacco Control. In December 2013, a directive issued by China's State Council ordered government officials to stop smoking in public places.

Why are these promising signs? Because China has a history of initiating dramatic social changes from the top down, rather than vice versa: Notable examples include the Cultural Revolution, the economic reform and the recent anti-corruption drive. If history is any guide, buy-in from lower-level decisionmakers will likely follow the new leadership's stance. For example, in November 2014, Beijing's municipal legislature passed a bill banning smoking in all indoor public places and workplaces. It was the strictest anti-smoking bill China has ever passed. Also in November, the State Council released the Ordinance on Restricting Smoking in Public Spaces for public consultation, which would ban smoking at all indoor public spaces and some outdoor spaces at the national level.

If the new advertising law is approved, China will have a much-improved legal environment for tobacco control. The actual implementation and effectiveness of the regulations, however, will largely depend on the determination of top leadership and their ability to achieve buy-in from interest groups at various levels.

Min Gong is an economist at the nonprofit, nonpartisan RAND Corporation. William G. Shadel is a senior behavioral scientist and associate director of the Population Health Program at RAND.

This commentary originally appeared on U.S. News & World Report on January 31, 2015. Commentary gives RAND researchers a platform to convey insights based on their professional expertise and often on their peer-reviewed research and analysis.