Somalia on the Mediterranean 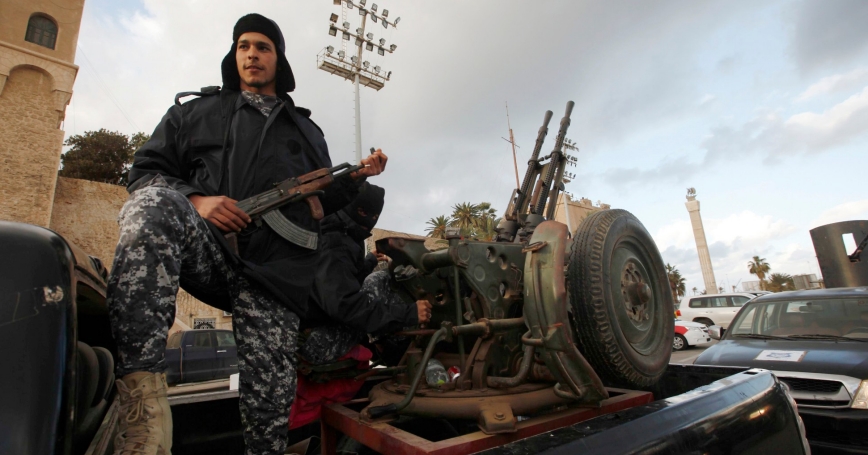 Libyan Police prepare during the start of a security plan to increase security in Tripoli, February 9, 2015

The Islamic State's beheading of 21 Egyptian Coptic Christians in Libya, and Egypt's subsequent airstrikes on Libyan soil, have relaunched debate over what to do about the mounting crisis in that country.

The situation in Libya—previously seen as a success of Western intervention and a victory for the heady, if unsteady, forces of democracy then erupting across the Arab world—has deteriorated steadily in the last few years. Libya is now a failed state ravaged by civil war, and a magnet for al Qaeda and Islamic State (IS) recruits.

The question is what the United States and its allies can do now to stop the hemorrhaging. Many options have been debated, but none look very promising.

Another international military intervention, as the Italians and Egyptians have recently proposed, would be very costly, unpalatable politically, and uncertain to work. Backing one faction against the others, as some urge, is almost certain to backfire. The current approach, which relies on peace negotiations under the auspices of the United Nations, is unfortunately also a long shot and is unlikely to halt Libya from morphing into a terrorist safe haven teetering on the edge of a broader humanitarian crisis. At a minimum, that strategy must be complemented with a more serious effort to contain the spillover.

Libya's lengthy and porous borders, a large unemployed and conservative youth population, the return of fighters from Syria and Iraq, and a surfeit of weapons raided from Qaddafi's old casernes are turning Libya into a hot spot for would-be jihadis.

Libya is likely now home to more IS fighters than any other country besides Iraq and Syria. IS has actively sought to compete with al Qaeda's regional franchise, al Qaeda in the Islamic Maghreb, for influence on the ground. IS leader Abu Bakr al-Baghdadi has openly challenged the legitimacy of other groups, including al Qaeda, in Libya. But the competition hasn't exhausted their ranks: Both are fighting alongside and against locally focused jihadi groups such as Ansar al-Sharia, the group responsible for the September 2012 attack on the U.S. diplomatic facility in Benghazi that killed Ambassador J. Christopher Stevens and three other Americans.

The spread of terrorist groups in Libya is a direct consequence of the collapse of the Libyan state, itself a result of the international community's failure to support Libya's post-conflict reconstruction. The United States and its allies that backed Qaddafi's overthrow share the blame for Libya's condition. President Barack Obama himself admitted in an August 2014 interview with the New York Times's Thomas Friedman that the U.S. failure to help the Libyans in the aftermath of Qaddafi's overthrow was one of his biggest foreign-policy regrets. Needless to say, U.S. and European embassies have departed.

The country is now divided between two governments. The government in Tripoli is made up of conservative Islamists, who claim the mantle of the revolution. The government in Tobruk represents more moderate forces and is recognized by most other countries. Both sides have aligned with military forces—“Libya Dawn” for Tripoli, and the “Libyan National Army” for Tobruk. But all sides are fractured internally. To make matters worse, regional powers, especially Egypt, but also Gulf states and Turkey, have supported one side against the other—a fact that will make it difficult for Egypt to argue that its airstrikes were solely aimed at targeting the Islamic State.

Forces aligned with Tobruk have acknowledged help from Egypt, the United Arab Emirates, and Saudi Arabia in their “war on terrorism,” but they have denied the claims that the Egyptian military is conducting airstrikes at their behest and countered that Qatar, which supplied rebel forces with weapons during the initial revolt, has been supplying arms to Libya Dawn.

Libya, in other words, is now a proxy war for the broader conflict between militarism and Islamism playing out in the Middle East and North Africa, as vulnerable to further IS inroads as Syria was a year ago.

Of equal concern is the drop in oil production due to the fighting. In a country that relies almost exclusively on proceeds from oil to pay salaries and import many basic needs, a continued decline in oil production could eventually portend an even more devastating economic and humanitarian crisis.

Yet despite all these grim omens, the international approach to Libya has changed little since Qaddafi was killed. Attention, resources, and the level of interest have all been limited. U.S. policy is at best unclear. In part, this is because of the crises in Ukraine, Syria, and Iraq, which dominated the headlines in 2014. But it is also because the choices are so unpalatable.

One option is to intervene again to enforce a peace.

To work, however, this would require, at a minimum, authorization from the U.N. Security Council, much greater cooperation from regional powers, significant air power, and tens of thousands of Western troops—possibly more—for post-conflict stabilization. In other words, it would be a multiyear commitment akin to those in Iraq and Afghanistan. In this day and age, Washington and European capitals are united in their desire to avoid any such scenario at all costs—in Libya or elsewhere. Egypt has called for a U.N. intervention. This might have worked three years ago, when Libya was at peace, but the United Nations is hardly prepared now for a forced-entry military operation.

Some observers have therefore argued that the United States and its allies should pick sides and offer military backing to the Libyan National Army and General Khalifa Haftar.

But this is also unsound. Not only are the moderate factions far from unified, but the Islamists have deep roots and by many counts enjoy greater national support as the real heirs to the 2011 anti-Qaddafi revolt. At best, a strategy of supporting the moderates would succeed only in leveling the playing field and creating a painful stalemate that might be conducive to negotiation. At worst, it would alienate many moderate Islamic factions, intensify the violence, and turn millions of Libyans against the West for no gain.

Facing these dire options, the United States and its allies have settled on a policy of containment by default, in hopes that buying time will allow a breakthrough in U.N.-sponsored peace negotiations in Geneva. Unfortunately, this strategy is also unlikely to work.

Facing these dire options, the United States and its allies have settled on a policy of containment by default, in hopes that buying time will allow a breakthrough in U.N.-sponsored peace negotiations in Geneva. Unfortunately, this strategy is also unlikely to work.

To succeed, the Geneva negotiations need support from regional powers and political factions that can control their forces on the ground, not to mention that have a basic willingness to compromise. On all three fronts, there is little reason to be optimistic. A ceasefire announced in mid-January quickly fell apart. Regional powers like Egypt will continue to add fuel to the fire and are unlikely to agree to support a settlement in which the (non-jihadi) Islamist factions from Misrata are a major signatory. Even with an agreement, spoilers such as Ansar al-Sharia—and now IS—would almost certainly continue to stoke the violence with guerrilla and terrorist attacks.

Given the dim prospects for a negotiated settlement that holds in the near term, more meaningful efforts to contain the crisis are needed.

More military assets from the United States, its allies, and regional partners—for intelligence, surveillance, reconnaissance, border monitoring, and other tasks—should be devoted to Libya. These must be complemented by active political and diplomatic efforts to shore up Libya's neighbors—especially Tunisia, but also Egypt—even while pressuring Cairo to distance Egypt from its proxies and working to bring levels of violence in Libya down overall.

At the same time, the tempo of counterterrorism operations within Libya itself will inevitably need to increase as the Islamic State gains adherents, weapons, and potentially other forms of support from “core IS” in Syria and Iraq. Here, the United States will have to play a leading role.

Whether or not the United States is prepared to do anything more in Libya, even on this smaller scale, remains to be seen. But the hands-off policy the West has pursued in Libya since Qaddafi's death isn't working. Four years after Libya threw off the yoke of a 42-year dictatorship, the outlook for the country has gone from bad to worse to dire. Despite the many other problems in the world, something must be done to stem three years of hemorrhaging in a country that once promised to be one of NATO's greatest successes. Otherwise, Qaddafi's son's prediction that Libya would become the “Somalia of the Mediterranean” seems likely to come true, with serious consequences for security across North Africa and into Europe.

Christopher S. Chivvis is a senior political scientist at the nonprofit, nonpartisan RAND Corporation and teaches at the Johns Hopkins School of Advanced International Studies. He is the author of the forthcoming Toppling Qaddafi, a book on last year's NATO intervention in Libya.

This commentary originally appeared on Foreign Policy on February 18, 2015. Commentary gives RAND researchers a platform to convey insights based on their professional expertise and often on their peer-reviewed research and analysis.