The Afterparade: No Breakthroughs — and That's Just Fine 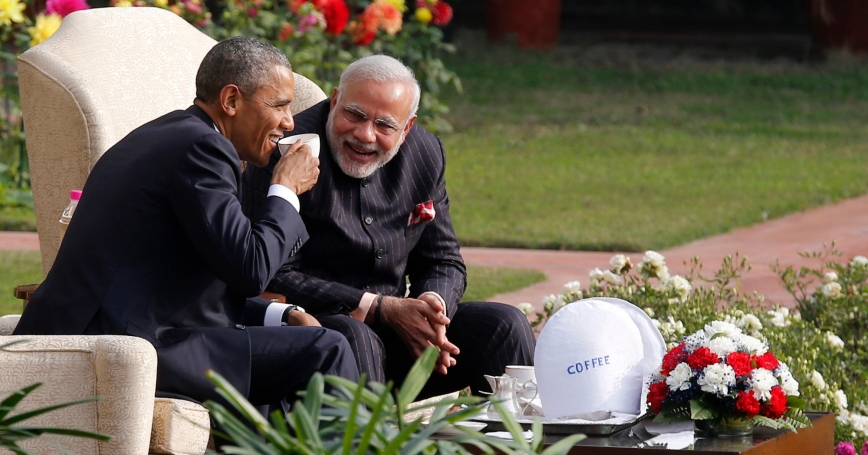 President Barack Obama's visit to India last week was hailed in many quarters as a landmark event, perhaps signaling a new era of cooperation between the two nations. In reality, the concrete takeaways were quite modest: there was no breakthrough on climate change, trade or civil nuclear liability. But the trip should nonetheless be judged a success. Despite their many shared interests and common values, India and the United States will draw closer by incremental steps rather than flashy sprints. Workmanlike agreements in the security sphere will keep the process moving forward, and—given the troubled partnership of the recent past—that alone is cause for optimism.

One year ago, relations between New Delhi and Washington had hit their lowest ebb since the last millennium. The arrest in New York of an Indian deputy consul led to retaliation against U.S. diplomats in India, the early withdrawal of the American ambassador, and an estrangement that reached well beyond government circles. The incident demonstrated the dangers of putting such an important relationship on autopilot. Normally, a diplomat accused of relatively minor offenses (in this case, visa fraud and failure to pay minimum wage to a domestic worker) would simply have been directed to leave the country rather than hauled away while dropping her young children at school, strip-searched, and detained alongside potentially violent criminals. Here, the lack of high-level attention in Washington left events in the hands of a Manhattan federal attorney not tasked with the maintenance of diplomatic ties. Bitter feelings on both sides lasted through the end of Prime Minister Manmohan Singh's term.

The replacement of Singh by Prime Minister Narendra Modi in May 2014 seemed to bring an even greater headache. Modi had been denied a visa to enter the U.S. in 2005, on suspicion of complicity in anti-Muslim pogroms during his tenure as chief minister of Gujarat three years earlier. Would he still hold a grudge for his exclusion? Could President Obama embrace him without alienating Muslims worldwide? In September, 2014, a successful visit to Washington by the new prime minister set these concerns to rest: The past would remain in the past, and the future would remain to be written.

Expectations for the Obama-Modi meeting this week, therefore, outstripped unforgiving realities: The leaders (one theory ran) would sign an accord on climate change as far-reaching as the one reached just two months earlier by Obama and Chinese President Xi Jinping. The meeting (ran another) would finally remove the obstacles to implementation of the Civil Nuclear Cooperation agreement that had been mooted a decade earlier by President George W. Bush and Prime Minister Singh. Trade disputes that had tied negotiators in knots since the Doha Round would be unraveled overnight.

None of it happened. On climate change, the sides agreed to a raft of very limited renewable energy initiatives, and Modi promised to edge India closer to the global standard on hydroflourocarbon; but India—the world's third-largest emitter of the key greenhouse gas carbon dioxide—pointedly refrained from joining the United States and China in pledging to reduce emissions by a specific percentage over a definite time-frame—or even, indeed, at all.

On the civil nuclear agreement, U.S. hopes were dashed when Modi declined to back legislation bringing India's liability laws into conformity with global standards; the proposed work-around, details of which have not yet been made public, have left U.S. and other foreign firms unconvinced. U.S. negotiators do not appear to have fully understood how deeply committed Indian legislators are to avoiding another Bhopal: in 1984, in what still ranks as the world's worst industrial disaster, a gas leak at a Union Carbide pesticide plant gravely injured perhaps half a million people, and left several thousand dead; the company eventually paid a fine equivalent to less than $1,000 for each person believed affected, and the American CEO (who slipped out of the country after being indicted for manslaughter) lived out the next two decades of his life without ever serving a day in jail. It is impossible to understand India's reluctance to absolve foreign firms of civil nuclear liability without understanding the legacy of Bhopal.

In the security arena, however, the two nations moved ahead on low-profile initiatives that may well provide more long-term ballast to relations. They renewed an expiring pact on defense cooperation for an additional decade. More importantly, they agreed to joint production of four “Pathmark” lines of military hardware. These items are an upgraded version of the Raven, a hand-launched mini-drone to help soldiers see what is going on over the next hill; ISR (intelligence, surveillance and reconnaissance) modules for the C130-J turboprop aircraft that India purchased from the United States in 2007; mobile hybrid electric power sources; and gear to protect troops from chemical or biological weapons. The negotiators also set up working groups to explore joint development of jet engines, and upgrades (perhaps including electromagnetic aircraft launch systems) for aircraft carriers.

None of these developments will transform the relationship between India and United States, but that is no cause for disappointment. After a year of exceptional turbulence, following a half-decade in which relations appeared to be virtually becalmed, perhaps it is time for a smooth, steady sail. Last week's meeting between Obama and Modi produced a gentle tailwind, and kept the rudder set on a steady, prudent course.

This commentary originally appeared on Foreign Policy on February 2, 2015. Commentary gives RAND researchers a platform to convey insights based on their professional expertise and often on their peer-reviewed research and analysis.