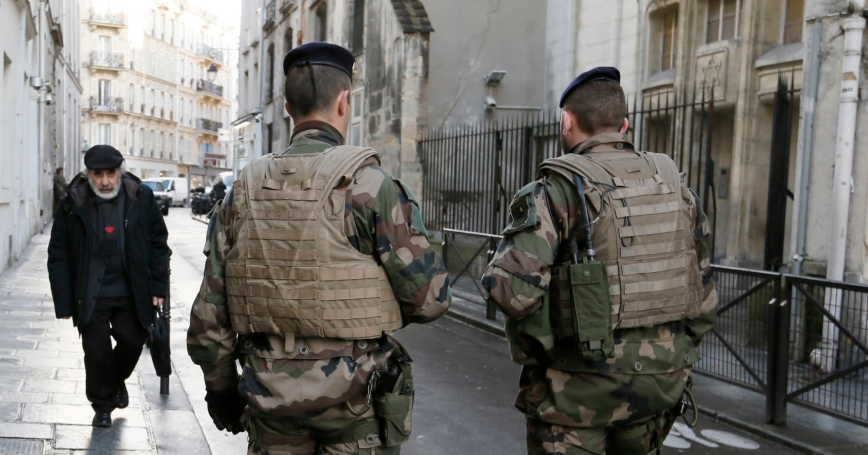 The recent images of French troops guarding synagogues and Jewish schools underscore an important point: France is not the problem when it comes to defending Jewish lives and Jewish rights. On the contrary, with a few exceptions, the French state and nation have been stalwart on these issues, if only because the French government has understood that those who strike at Jews usually are striking at values dear to France.

In fact, more than 200 years ago, French troops stood guard over Jews much as they do now. This happened between roughly 1818 and 1860 in villages across the French province of Alsace, then the heartland of Jewish France. The problem was a volatile combination of long-standing anti-Jewish sentiment combined with populist radicalism that made striking at Jews a convenient way to strike at the French state and establishment — itself evidence of the state's close relationship with its Jewish population — as well as a rejection of the principle of civil equality inherited from the Enlightenment and the Revolution.

In a sense, both the conservative Catholic right and the radical left agreed when it came to hating Jews. Consequently, in the words of one Alsatian administrator, Alsatian peasants were “only too disposed to have a St. Bartholomew's day for the Jews,” referring to a massacre by that name of thousands of French protestants in the 16th century. Alexandre Weill, an Alsatian Jewish memoirist, commented that the Jews of Alsace would have been “if not exterminated, at least pillaged and expelled” had the government not been “more humane, more liberal, and more tolerant than the Alsatian population.”

Weill wrote of a pogrom that had been planned to coincide with the inauguration of a new Torah scroll in his village when he was a child in 1820. Tipped off by a Catholic friend, he warned his father, who passed the warning to the authorities. The government sent to the town a company of regular army troops — grenadiers — to thwart the attack. According to Weill, the troops arrived just in time. They ended up leading the parade of Jews celebrating the Torah inauguration, which marched to the beat of the unit's drummer. The rabbi, he wrote, blessed some of the troops, who then cried because they realized they had just saved “300 souls.”

The episode Weill described was not uncommon. Throughout this period, the French state had to direct the police closely to keep watch over Jews and arrest anti-Jewish agitators. Frequently, it deployed the regular army to dissuade would-be attackers. Sometimes the troops did not arrive on time: In 1832 and 1848, the residents of several towns interpreted uprisings in Paris as a green light to attack Jews and sack Jewish neighborhoods. Army units — infantry and cavalry — subsequently stormed the towns and battled local militia and other town residents to restore order and enable Jewish residents to return to their homes. The fighting sometimes lasted several days, and often resulted in the military occupation of swathes of Alsatian territory.

At roughly the same time, French forces were busy expanding France's dominion over North Africa. There the French state extended its protection to local Jews — in this case, protection from Muslim rioters — and made a point of bringing Jews into the embrace of the nation. In neither Algeria nor Alsace was philo-Semitism or even positive views of Jews at work. Rather, the French authorities equated treating Jews well with modernity, progress and the defense of certain Enlightenment values that had become critical to French identity.

Indeed, the Dreyfus Affair and the Vichy regime's anti-Semitic policies and collaboration with France's Nazi occupiers happened because some within France were, like those Alsatian peasants, hostile to the liberal values that made protecting Jews an imperative; they fought to assert different values and a different identity. Critically, they lost, and to the extent that such elements remain, they persist disgraced and relegated to France's political and social fringe.

While it is heartbreaking to see that once more French troops must stand guard over Jewish schools and places of worship, one can at least take comfort from the fact that France itself is holding true. Two hundred years after grenadiers saved Alexandre Weill's community, France as a nation still stands ready to defend its Jewish citizens because the French, as before, understand what is at stake.

This commentary originally appeared on U.S. News & World Report on February 13, 2015. Commentary gives RAND researchers a platform to convey insights based on their professional expertise and often on their peer-reviewed research and analysis.