Europe Must Spend More on Arms to Deter Putin 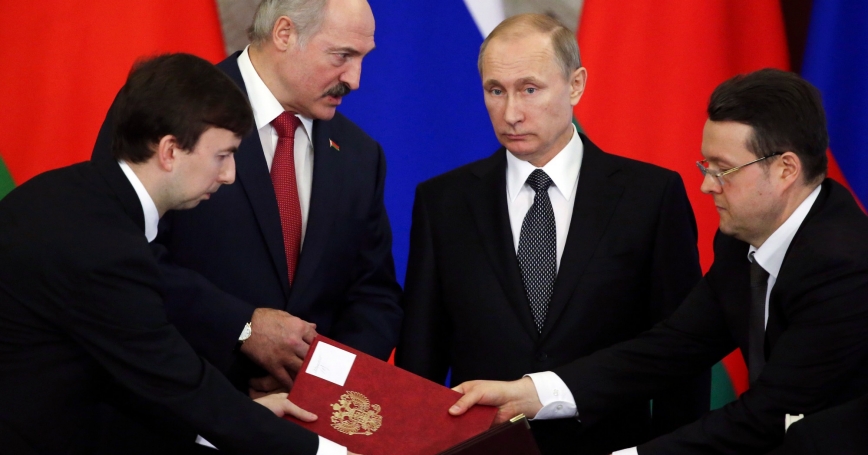 Russia's President Vladimir Putin and his Belarussian counterpart Alexander Lukashenko (2nd L) attend a signing ceremony during a session of the Supreme State Council of the Union State at the Kremlin in Moscow, March 3, 2015

The leaders of France and Germany were present in Minsk last week for the latest negotiations over Ukraine. Formal participation by the U.S. was conspicuous by its absence.

The White House has made the not unreasonable calculation that U.S. goals are best served by having Europe take the lead on a European crisis. But the question then arises, how well prepared are the Europeans to engage an adversarial Russia on the many fronts required?

Problems abound. The crisis between Greece's new populist leaders and its European creditors is probably at the beginning of the beginning, despite this week's bailout extension. The terrorist strikes in Paris coupled with anti-immigrant marches in Germany have brought into the open a growing fear that in welcoming others to join their societies, Europeans may instead have fostered the growth of another's society in their own midst.

Economic turmoil and persistent debt have led to government budget cuts that in some countries like Greece and Spain have spurred anti-austerity into the lead as a political platform. But questions about what Greek austerity and the absorption of immigrants might portend for Europe's low growth economies seem detached from the troubling security specter from both within and beyond Europe's borders.

Recent cuts have done nothing but extend longtime downward trends in European defense spending. This matters now that Russia has chosen to flex its military might, diminished though it may be.

Even as his country is reeling from its own economic woes, Russian President Vladimir Putin is demonstrating a propensity to gamble by annexing Crimea and reinforcing separatists in Eastern Ukraine. This, combined with the imperatives of dealing with civil unrest and economic malaise, has raised the stakes for European governments facing difficult budget choices.

Long-term systemic problems combined with deflationary policies aimed at stemming short-term budget crises since 2007 to 2008 have severely affected Europe's current rates of economic growth and immediate prospects for the future. This, in turn, has potentially profound implications for relations between workers and business owners, native citizens and immigrants and the public and the state in several countries, including France, Germany and Italy.

It remains to be seen whether the slow path toward recovery will win the race against the pressure for more profound shifts in long-held beliefs and practices across the wide range of European civic and economic interactions.

Among the assumptions upon which European policy has been based over the past quarter-century is that at least the contemporary European scene contained no large predators: nations whose raisons d'etat led them to territorial aggrandizement at the expense of smaller and weaker neighbors.

It was an environment in which countries such as Czechoslovakia and Yugoslavia (to say nothing of pressures toward similar trajectories in Belgium, Spain, the U.K. and others) could be reconstituted into the smaller polities of which they were once composed without excessive fear of falling too far below defensible size.

Why not, particularly when the most likely potential antagonists were their former fellow citizens now constituting comparably sized neighboring states? Throughout Europe, these conditions meant that national decisions regarding prioritizing between guns and butter—that is, weighing priorities between defense and domestic spending­—were weighted heavily toward the latter.

As a consequence, European spending on defense has dropped since 1991, the year of the Soviet Union's collapse. In France, Germany and the U.K., military spending as a share of gross domestic product dropped 35 percent, 36 percent and 41 percent, respectively by 2013. U.S. military spending fell 19 percent over that same period. The current shares of GDP are U.S: 3.8 percent; France: 2.2 percent; Germany: 1.4 percent; U.K: 2.3 percent.

The disparity between Germany's economic stature and military commitments is striking. While the U.S. decline has fluctuated with changes in missions, the drop in European defense commitments has been monotonic despite out-of-area deployments. These cuts are policy not circumstance: For the three European countries the rates have held constant since before the 2008 financial panic. There has been no compensation to account for lower rates of GDP growth.

Russia's 2014 actions in both Crimea and eastern Ukraine have thus raised a threatening specter at a most inopportune time. To be sure, Russia's opportunities will be limited by its own economic travails. The decline in the price of oil from $110 per barrel to below $60 today, combined with the sanctions ensuing from Russia's takeover of Crimea and its projection of violence and force into Ukraine, may change Russia's capacity to support its military, but its armed forces remain the region's giant.

The world has now learned that Putin has the propensity to gamble. It may also be that he is focused on the short term, although this is not entirely clear. (Surely, part of his motivation is the acclaim he receives from the Russian public in righting what is perceived as an historic wrong. But Putin also realizes if Ukraine goes the way of Poland into the EU his vision of renewed power status for Russia could vanish along with it.)

If he is also an optimist, the formula might prove volatile. An optimistic gambler (Saddam Hussein?) has the capacity for creating situations that will inflict considerable penalties on all concerned. Even if violent confrontation leads to a successful outcome for the West, the costs are almost certain to be well above anything that Europe or the United States would consider commensurate with the gains.

It is up to the Europeans to reduce the potential for miscalculation by visibly reversing the trend in their own military spending to ensure that any bet on easy aggression will not appear to be such a sure thing.

This is an easy recommendation to make; it will be a difficult one for Europe to follow. The prospects for strong economic recovery in Europe remain dim and there is likely to be considerable attention paid to local concerns for quite some time.

Demonstrations in Greece and elsewhere suggest that the European public may have little sympathy for governments not devoting most efforts to domestic discontent and foreign indebtedness. The crisis of societal confidence experienced in France and elsewhere may predispose Europe to paralysis.

Yet, the need to project some deterrence to local predation should not be shunted aside as it so easily could be by a self-preoccupied Europe. And while NATO out-of-area operations do not themselves address concerns about a newly adventurous Putin, a credible case may be made that such actions also provide some protection for Europe against newly emerging potential sources of serious, consequential loss.

The political will might be lacking to reprogram aspects of domestic spending that are wasteful since no one takes cuts to their benefits, no matter how ill conceived, as justified.

Lack of courage is not a good argument for inaction, but one credible path through this conundrum may be greater coordination among the major European states. Each euro devoted to defense must be made to work very hard. This suggests the need for enhanced cooperation on burden sharing, specialization and mission definition within the structures of NATO.

Europe is being challenged and tested. While it may be difficult for any single state to meet this test, it may be time to kill two birds with one stone: reducing the slide that sees the EU punching below its geopolitical weight while at the same time providing new impetus to the concept of a united Europe.

Steven W. Popper is a senior economist at the nonprofit, nonpartisan RAND Corporation.

This commentary originally appeared on Newsweek on March 3, 2015. Commentary gives RAND researchers a platform to convey insights based on their professional expertise and often on their peer-reviewed research and analysis.