For Ukraine, the Battle to Bolster a Crashing Economy Is as Dire as Combat in the East 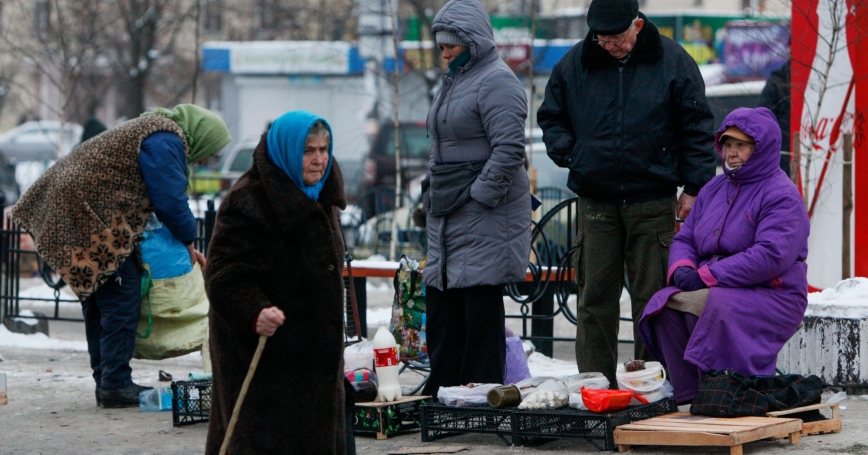 With political upheaval and a war in the East, Ukrainians are facing poverty, with prices rising sharply, the currency crumbling, and a nearly bankrupt state.

Ukraine's fight to control its destiny is underway not only on its eastern battlefields but also in the halls of its parliament and in those of global financial institutions. The struggle to keep the former Soviet state afloat economically has been daunting, as the nation's parliament has fallen into disarray and failed to enact major economic reforms.

The country's gross domestic product fell by an estimated 8.2 percent by 2014's end. Government reserves have fallen to $7.5 billion, the equivalent of less than two months of imports. Ukraine's economic woes could get worse: If Western creditors, and the International Monetary Fund in particular, do not approve a recently negotiated $17.5 billion package, the nation will be deemed to be in default.

The parliament launched its consideration of the 2015 budget at the end of 2014, laboring until 4 a.m. Dec. 29 to barely approve it — 233 of 450 of them voting in favor. The nationally televised discussions had lasted two weeks, and, at one point, lawmakers said the budget had undergone so many changes they needed a timeout so amendments could be incorporated into a plan that all could see. Rather than waiting, lawmakers jumped ahead in their deliberations.

The budget was published Jan. 1 to meet a legal deadline. But Ukrainian leaders quickly termed the budget provisional and said it would be subject to revisions as soon as January. A number of amendments were passed earlier last week (March 2).

That left a handful of top Ukrainian negotiators with the tricky task of persuading international lenders at a critical moment to provide billions of dollars more in aid without evidence the country would undertake reforms needed to enable it to repay the debt.

Ukrainian Prime-Minister Arseniy Yatseniuk has suggested slashing Ukraine's social tax to 16.4 percent from 41 percent — but this would apply to businesses only if they also increase their employees' official salaries by 30 percent. Ukrainian leaders also say they will boost trade and energy tariffs, lay off 20,000 interior ministry staff, and cut judicial and legislative costs such as expenses for deputy advisers. Yet Ukrainian leaders fell far short of their promises for more “draconian measures,” as the Yatseniuk government had outlined in its own reform strategy last fall.

Ukraine's current quandary harkens back to decisions made in the 1990s. The nation then confronted stark choices as to how best to move away from a state-run economy to a free market. Some advocated a “Big Bang” approach, others favored gradualism. Both camps argued about the speed of reforms rather than their scope as the latter had to be far-reaching anyway. After the Soviet Union's collapse, East bloc countries diverged in their choices of reform speed. Some countries made gradual transitions to market economies while other pursued quick radical reforms. Poland pursued radical reforms and today is viewed as a regional leader with positive growth rates even in harsh fiscal times. Two decades ago Ukrainians opted for an incremental economic approach, which failed. Then, Ukraine's former communist elites pushed gradualism and in fact held the nation back from a market economy.

As for Big Bang reforms, they were fiercely advocated by Kakha Bendukidze, a father of Georgia's economic miracle and a member of the Pardee RAND Graduate School's Board of Governors. He died suddenly in November, soon after he was invited to join Ukraine's government and had been advising Ukraine's leaders. But in an hourlong discussion last spring, Bendukidze kept insisting to me that it was vital for Kiev to avoid missing the “window of opportunity” for reforms before it slams shut. He said the Ukrainian government must fire many bureaucrats, especially former Communist Party members, numbering more than a half a million total in 2014 (1 percent of Ukraine's population of 44 million). He was adamant that Ukraine had to stop subsidizing its energy sector, thereby reinforcing its addiction to Russian supplies and making it vulnerable to Moscow's economic pressure. Finally, he underscored that it would be critical for Ukraine to liberalize its economy, slashing regulatory agencies and their diktats as well as privatizing state enterprises that still account for about 8 percent of Ukrainian firms.

The 2015 budget not only wouldn't pass muster with reform advocates like Bendukidze, recent public opinion polls show that it's unlikely to please Ukrainians themselves. Though wary, they also want Big Bang reforms. Their hardship already is great but they seem convinced that future prosperity may be worth accepting more economic pain now. Their highest priority reform obviously rests in anti-corruption efforts. The newly established national Anti-Corruption Bureau is supposed to help, though its functions are still under debate. It cannot be effective without political independence, however, and that is a questionable commodity in Ukraine's current political environment. Ukrainians are eager for economic deregulation, and they do not see the military conflict in the East as an excuse for stalling this reform. They also are starting to insist on greater social equity, particularly so the nation's elite feel their share of war-related duress.

The budget and economic debate is far from over. As the national currency free fell in the past month Ukrainians have rejoined debates about their financial future, especially that they had to update the budget to meet negotiated IMF loan conditions and consider the impact of promised IMF aid. The Ukrainian Parliament should follow its budget amendments with policies that would eliminate excessive tax burden on businesses and distortive subsidies for unprofitable enterprises rather than introducing new taxes and duties. Leaders keep speaking of sweeping reforms and introducing incremental changes to balance the budget. But just as their generals must lead on the battlefield, the politicians and lawmakers must act with greater decisiveness to ensure their cause is not lost.

Olena Bogdan is an assistant policy analyst at the nonprofit, nonpartisan RAND Corporation and a Ph.D. candidate at the Pardee RAND Graduate School. This blog was written for the Pardee Initiative for Global Human Progress.