Give Ghani a Chance: Why This Time Is Different 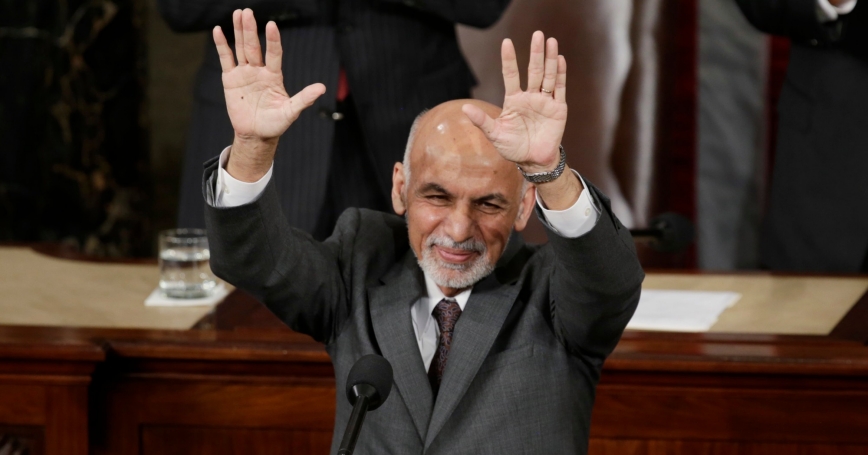 Last week, Presidents Ashraf Ghani and Barack Obama stood side by side, and pledged that, this time, things would be different. Afghanistan and the United States have been locked in an awkward embrace for nearly 15 years, but now that clinch is supposed to get a lot less uncomfortable. With a bit more time, patience, and (of course) money, a harmonious relationship is close at hand.

The public had heard it all before: The same talking points could have been used during any visit by former Afghan President Hamid Karzai (and, quite possibly, some of them were). The earlier promises were often transparently false, and were recognized as such by observers at the time. Today, however, some of the naysayers have turned guardedly optimistic. I know, because I'm one of them.

After years of broken promises, there is reason to believe that these will be kept and that the pronouncements about a better U.S.-Afghan future deserve the benefit of the doubt.

Like most current or (as in my case) former U.S. officials who have handled Afghanistan issues since 2001, I have seen both Karzai and Ghani in action. Although both leaders entered office with similarly high expectations, the two men are not even remotely similar. Whatever mistakes Ghani might make (and every leader is bound to make some), they won't be Karzai's errors. That alone is cause for optimism.

As leader of the interim administration put in place following the Taliban's ouster, and long after his 2004 election as president under Afghanistan's new constitution, Karzai was commonly viewed as a valiant champion waging an under-resourced battle. With his reassuringly British-accented English and clad in his iconic cape and cap, he seemed like a real-life character whose movie version could only be played by Sean Connery. To many U.S. and Afghan observers, he was a lonely voice of unity and democratic values, bravely trying to keep his nation from being torn apart by rival warlords, resurgent Taliban, and terrorist groups ranging from al Qaeda to the Haqqani network to the Islamic Movement of Uzbekistan. Give Karzai more support, conventional wisdom had it—more money, more troops, more of anything and everything—because he's the best shot Afghanistan has.

The subsequent policy failures in Afghanistan weren't wholly, or even primarily, attributable to Karzai. There is plenty of blame to go around, and much of it lies in Washington (and Islamabad) rather than Kabul. But by 2009, when he ran for a second term in an election plagued by fraud, a critical mass of observers in Afghanistan and the United States had come to regard Karzai as a part of the problem. He was seen as enabling his three brothers to rack up a record of abuses including drug trafficking, torture, and industrial-scale graft. He routinely appointed governors, ministers, and other key officials on the basis of personal loyalty rather than competence. He took no action as his cronies (most notably, his brother Mahmoud) looted nearly $935 million from the Kabul Bank—and actively thwarted international efforts to recover the funds and prosecute the offenders.

Throughout this period, U.S. government officials would put a shine on the rotten apple as they tried to pressure Karzai to change. “Despite recent events,” they may have said to themselves, “he finally gets it.” But he never did. His antagonistic public statements—including hyperbolic rhetorical attacks on NATO troops and reported threats to join the Taliban—further poisoned the well of international support. More importantly, his decision-making became increasingly erratic, his promises increasingly unreliable. By the end of his presidency, Karzai was reduced to nothing more than a potential spoiler: a leader with few committed followers and a non-partner for the international community. Many Afghans felt that his faults had been obvious from the very beginning and wondered why Washington took so long to notice.

This is the baseline for any argument that the future will be different from the past. One year ago, it was unclear whether Karzai would seek to retain his office in violation of the constitution, or perhaps reign as de facto ruler with a handpicked front-man as puppet president. It's hard to imagine Afghanistan making any sort of progress, or retaining the support of the United States and other key donors, with Karzai still in charge. A prime selling point for both Ghani and Chief Executive Abdullah Abdullah is that both men are not Hamid Karzai.

Perhaps the most noteworthy way in which Ghani is not Karzai is his willingness—his eagerness—to accept highly restrictive conditions on foreign aid. One of the most significant parts of the Obama-Ghani joint statement was the announcement that up to $800 million in economic assistance will be “tied to Afghan achievements of specific development results and implementation of key policy reforms.” Nations receiving aid typically push hard for a no-strings-attached approach, but according to Afghan and U.S. sources, Ghani welcomed the restrictions, probably for two reasons.

First, as a longtime World Bank official trained to demand concrete results as the condition for more money, he knows that assistance de-linked from performance is merely charity. And charity, although good for the soul, is not a firm foundation for national finance. Afghanistan's operating budget is $7.6 billion per year, of which about 65 percent comes from Washington and other international donors. No accountability, Ghani knows, would soon mean no donors—and no donors would mean no way of keeping the government running.

Second, the biggest challenge for both Ghani and Abdullah lies in bringing the unruly members of their own fractious coalitions under control. Both men are personally committed to good governance, and Ghani made it the centerpiece of his presidential campaign: “Corruption is clearly the cancer that eats through our societies,” he said during last week's visit to the United States. But his commitment runs directly counter to the interests of Afghan power-brokers on whom he and Abdullah rely. The success of the new regime, in other words, depends on institutionalizing an ethos that is almost exactly opposite the one adopted during the Karzai era. Now, as he struggles to change that, he will have the donors as his heavy. Governor X, he will be able to say, if you want that $20 million irrigation project in your province, you will need to fire A, B, and C corrupt officials, and set up a transparent accounting system that meets the standards set by these donors.

The battle in Afghanistan has now gone on so long that service is a multi-generational affair. A kindergartner who waved to his deploying father when U.S. troops first entered Afghanistan would now be old enough to fight there himself—and at least a few parents and kids have served together in the same units. But the type of war that U.S. forces are now entering has changed drastically from the one that their elder relatives may have fought. The battle is now a contest by Afghans, for Afghans, between Afghans.

This is the last year of combat operations, and U.S. troops have been drawn down to about one-tenth of their peak strength: Last week, Obama agreed to keep the total strength of U.S. troops at 9,800 until the end of the year, rather than ramping them down by half as originally planned. But less than four years ago, the number was 101,000. By contrast, the Afghan National Security Forces now stand 352,000 strong, despite retention problems, and last week the United States promised to keep funding them at this level through 2017, to the tune of about $4 billion per year. That's a tiny fraction of the $198 billion spent by U.S. taxpayers on U.S. and allied military operations in 2012 and 2013.

All this doesn't mean that the remaining American troops face no danger, or that there won't be further U.S. casualties: There is no such thing as a “safe” war-zone. And for Afghan soldiers, the past year was exceptionally bloody, and the future promises more of the same. But the dynamic of the previous decade was unhealthy for all parties: A war fought by a foreign power, without the control, direction, or robust participation of the nation on whose behalf it is purportedly being waged, has little chance of popular support or success. Afghans finally have ownership of their struggle—and the responsibility that goes with it. U.S. troops (and the taxpayers who fund them) finally have a mission that is far more modest, realistic, and manageable.

The future's so bright you gotta wear shades? Hardly. In Afghanistan, optimism is always relative. Ghani and Abdullah face formidable challenges, and their success is far from guaranteed. When U.S. interests are out of sync with Afghan priorities, Ghani will opt for domestic goals (as he should). But where Karzai (at least in his later years) saw himself as the champion of Afghanistan in opposition to the United States, Ghani—a life-long technocrat who has lived in America about as many years as he has in Afghanistan—sees himself as championing Afghanistan's interests in concert with Washington. He demonstrated this in a moving tribute at the Pentagon to the nearly one million Americans who served in Afghanistan, the 20,000 who were wounded there, and the 2,215 who never made it home alive.

It's hard to imagine Karzai offering such a gesture of heartfelt thanks, or treating international aid as an investment rather than a bribe, or voluntarily asking his defeated rival to join him in a government of national unity. That, in a nutshell, is why observers should be willing to set cynicism aside and indulge in a rare moment of hope.

This commentary originally appeared on Foreign Affairs on March 31, 2015. Commentary gives RAND researchers a platform to convey insights based on their professional expertise and often on their peer-reviewed research and analysis.