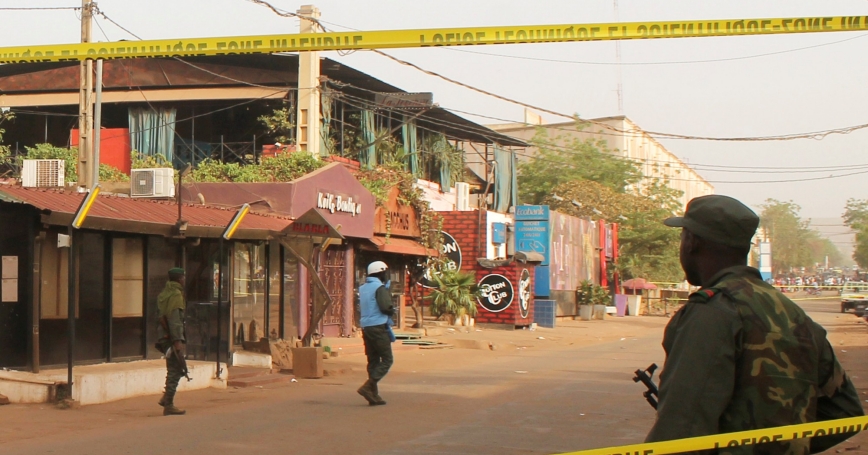 A soldier stands outside La Terrasse restaurant where militants killed five people in a gun attack in Bamako, Mali, March 7, 2015

The terrorist attack on Saturday that killed five people in a nightclub in Bamako, Mali, underscores the importance of international support for the West African country, which has become another front in the struggle against Islamist radicalism.

The terrorist group that claimed responsibility for the attack is al-Murabitun, which reportedly combines regional extremists with homegrown radicals and is one of a number of armed groups operating in northern Mali that have been fighting to undermine the governments of Mali and its neighbors, impose sharia law and destabilize the entire region. A splinter group of al-Qaida in the Islamic Maghreb, al-Murabitun attracted the attention of Western observers when it carried out the January 2013 attack against a gas plant in In Amenas, Algeria, that killed 40 people, overwhelmingly foreigners.

By striking a restaurant that is a favorite of expatriates in the heart of Mali's capital, al-Murabitun makes several points painfully clear. First, this attack puts into perspective the success of the French Operation Serval. Serval rolled back the Islamist groups that threatened to take over southern Mali after imposing sharia law in the three northern regions of Gao, Timbuktu and Kidal. Although the French significantly degraded the Islamists' strength — and although French troops continue to conduct combat operations — these groups have maintained their ability to act as a destabilizing force in the country. Second, eliminating the terrorist threat, rather than simply degrading it, will require more than what France and the United Nations have been able to deploy so far.

France's military intervention is simply too small to do much in so vast a territory beyond whack-a-mole. The U.N., which also struggles to operate effectively given the vastness of northern Mali, has a defensive mandate limited to protecting the population. The United States has the luxury of not having to take the lead, since France is on the ground, backed by the European Union and seconded by the U.N. But it could do more. At the very least, anything the U.S. does to enhance the ability of French and U.N. forces to keep watch over great distances, identify threats and opportunities and move quickly contributes to their effectiveness.

Much of the fight, however, has to be done by Malians themselves, led by Mali's authorities at every level and in both secular and religious institutions. So far, the Malian state has proved incapable of responding effectively to the mounting Islamist threat in spite of large amounts of military assistance provided by the United States and others. The fact that Malians — Muslim clerics included — are almost universally hostile to the groups that are ruining their country means the most elemental ingredient for victory is present: popular support. The preliminary peace accord recently reached between the government of Mali and armed rebel groups and militias also raises hopes that some degree of stabilization in the North may be in view. Nothing will be accomplished, however, without the determination of Mali's political leadership to fight the radicals. Nothing will be accomplished, either, without a Malian army reformed in depth so that it becomes not just an effective force but one that provides security rather than insecurity — the 2012 coup and numerous alleged human rights abuses are cases in point. Otherwise Mali and, indeed, the entire region will become far less secure, and Bamako will become yet another major city in which locals and expatriates fear to go out for a drink with friends.

This commentary originally appeared on U.S. News & World Report on March 12, 2015. Commentary gives RAND researchers a platform to convey insights based on their professional expertise and often on their peer-reviewed research and analysis.