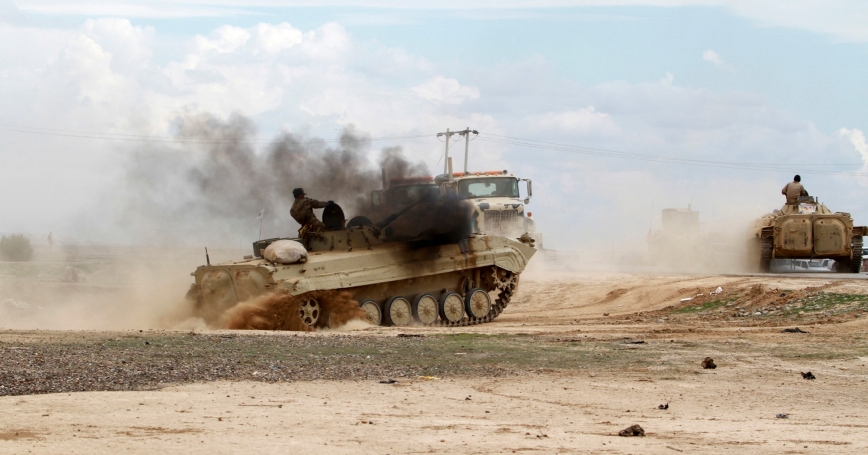 An Iraqi soldier rides in an armoured vehicle in Salahuddin province, Iraq, March 4, 2015, where Islamic State militants set fire to oil wells in the Ajil field east of the city of Tikrit to try to hinder aerial attacks aimed at driving them from the oilfield

Since June 2014, world oil prices have fallen by more than 40 percent. This is an enormous shift in the distribution of global income from oil exporters to oil importers. Annualized, the shift amounts to $600 billion, about 7 percent and 8 percent, respectively, of China's and Japan's annual gross national product—two countries that are among the world's largest oil importers. For several reasons, over the next several years oil prices are more likely to fall than to rise.

The global economy will benefit hugely from this shift, although there will also be losses and losers along the way. That global economic growth will be enhanced follows from the fact that oil is an intermediate good—an input to the production of final goods: that is, consumer goods (food products, cars, pharmaceuticals), investment goods (equipment, machinery, construction), and services (IT, tourism, and travel). Lower prices for intermediate goods reduce production costs of final goods, thereby lowering their prices. In turn, the lower prices will stimulate both consumer spending and investment. In the short run, stock markets may suffer due to negative effects on near-term profits of the major oil companies, including Chevron and ExxonMobil, the banks that are heavily invested in them, and the weight these companies have in the major stock indexes. But, in the medium and longer term, their profits will recover as a consequence of higher growth in the U.S. and global economies. In the interim, big oil's financial strength is abundantly ample to weather this setback.

That global security will also benefit from lower oil prices is a more complex, but no less compelling, prospect. The principal sources of global mayhem and militancy—in the Middle East and in Eastern Europe (Russia and its Ukrainian separatists)—have been heavily dependent on revenues from prevailing high oil prices. Sharp and sustained reductions in these prices will severely affect—whether directly or circuitously—the financing that enables the militants to operate and grow. This is not to say that financing drives these insecurities. The driving forces are deeply rooted in ethnic, religious, political, ideological, cultural, and historical conflicts. Neither energy issues in general nor oil prices in particular are among the drivers. Revenues from oil exports are enablers, not drivers, of the insecurities.

Consider these linkages between oil revenues and global insecurity:

Oil revenues are crucial for funding all of these insecurities. For Iran, oil represents 35 percent of its GDP. The sharp reduction in oil prices will severely constrict Iran's ability to support both its own nuclear weaponizing, and its support for Hamas militancy. Likewise, ISIS funding—both from its seized wells and from its oil-derived wealthy donors in Saudi Arabia, Qatar, and the Gulf emirates—will also decline. Russia's support for separatists in East Ukraine will be similarly affected, cutting its principal export revenue by 30 percent, or about $50 billion annually.

Although these scenarios are likely, none is certain. While the prospect of sustained low oil prices may be accompanied by volatility in the next several years, the volatility is more likely to veer toward lower rather than higher prices. One reason is that low prices will diminish incentives for exploration and new oil production, thereby reducing these conventional sources of supply. Another reason: horizontal drilling and hydraulic fracturing is likely to continue to advance in the United States. Increases in oil supply are also likely to result from the migration of fracking technology to other known shale-rich areas, including Algeria, Argentina, and China. A fourth reason is that increases in oil supply will reach global markets as a consequence of China's very large aid and investment programs focused on energy resources in emerging market countries. Finally, if and when renewable sources of energy supply—whether biomass, solar, or wind—become competitive, the result will be downward pressure on oil prices due to a shift of some energy demand away from fossil fuels. A caveat should be noted: if renewables are not price-competitive, subsidizing them is more likely to raise rather than lower oil prices.

Charles Wolf, Jr., holds the distinguished chair in international economics at the nonprofit, non-partisan RAND Corporation; he is a professor at the Pardee RAND Graduate School; and a senior research fellow at Stanford's Hoover Institution.

This commentary originally appeared in The International Economy on March 1, 2015. Commentary gives RAND researchers a platform to convey insights based on their professional expertise and often on their peer-reviewed research and analysis.