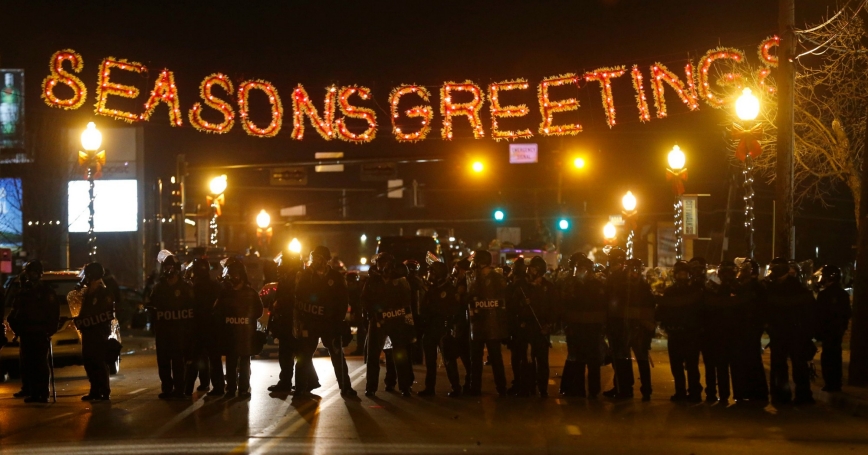 Police form a line after a grand jury returned no indictment in the shooting of Michael Brown, Ferguson, Missouri, November 24, 2014

by Nelson Lim and Greg Ridgeway

Two reports released by the U.S. Justice Department last week have thrust police-community relations back to the center of the national discourse. One clears former police officer Darren Wilson (PDF) in the shooting death of Michael Brown, an unarmed black teenager. Another strongly criticizes the Ferguson Police Department (PDF), Wilson's former employer, for a widespread pattern of racial bias, manifesting in traffic stops, fines for petty offenses, and use of force.

But while the DOJ's investigation of Wilson and criticism of the Ferguson PD have been grabbing headlines, a third federal report released last week may end up being more relevant to addressing America's policing dilemma.

An interim report by President Obama's Task Force on 21st Century Policing outlines nearly 60 recommendations for improving policing practices and fostering strong relationships between police and the communities they swear to protect and serve.

These are sound recommendations, consistent with the emerging consensus among experts. But only sustained, rigorous implementation of these ideas will produce the desired changes. Three sets of the task force's recommendations help illustrate this.

First, law enforcement agencies should collect and report data as the task force recommends. But without proper analysis, data can mislead the public, inflame emotion, and further deteriorate relationships between police and communities.

The debate about racial profiling illustrates the importance of rigorous and objective analysis. For example, a report of aggregate differences in traffic stops experienced by different groups doesn't necessarily constitute evidence of racial profiling. Despite decades of social science research concluding that it doesn't make sense, commentators continue to compare the race of those stopped by police to census numbers. Instead, a careful analysis should make comparisons with more appropriate benchmarks; examine racial differences in the outcomes from stops police make during similar times, and in similar places and contexts; and then flag particular officers who the analysis shows have unusual levels of stops of minorities, complaints, and use of force.

Second, the task force recommends that law enforcement agencies incorporate diversity and related topics (e.g., implicit bias, cultural sensitivity) into their training. Currently, diversity and inclusion training is often reduced to a few isolated hours of discussion using a standard set of PowerPoint slides. To move beyond this perfunctory approach — which research shows is ineffective — agencies must seamlessly integrate diversity and inclusion content into the training curriculum. Police officers must be convinced that overcoming their own implicit biases and being able to work with individuals from different backgrounds are essential skills for effective policing. To help ensure effectiveness, the curriculum must be rigorously evaluated to determine its impact on police behaviors.

Third, the task force recommends that agencies strive for a diverse workforce that reflects the communities they serve. To accomplish this, agencies must validate every facet of their hiring policies and practices, including outreach and recruiting activities, selection criteria (e.g., educational and fitness requirements), and background investigations.

Law enforcement agencies may consider the types of analysis recommended by the task force beyond their reach. But that's not necessarily true. With our colleagues at RAND, we — as well as other analysts — have conducted such analyses for several agencies. More importantly, we've created tools agencies can use to apply them.

RAND has also assisted several agencies with efforts to improve the diversity of their recruits. Our research shows that agencies can apply analytics to get the most out of their limited resources.

The president's task force has done a great service by providing dozens of sound recommendations to improve policing nationwide — good ideas that could help avoid another Ferguson. Now we need good implementation to go along with them.

Nelson Lim is a senior scientist at the nonprofit, nonpartisan RAND Corporation and a professor at the Pardee RAND Graduate School. Greg Ridgeway is an associate professor of criminology at the University of Pennsylvania.