Q&A: What to Expect from Ghani's U.S. Visit 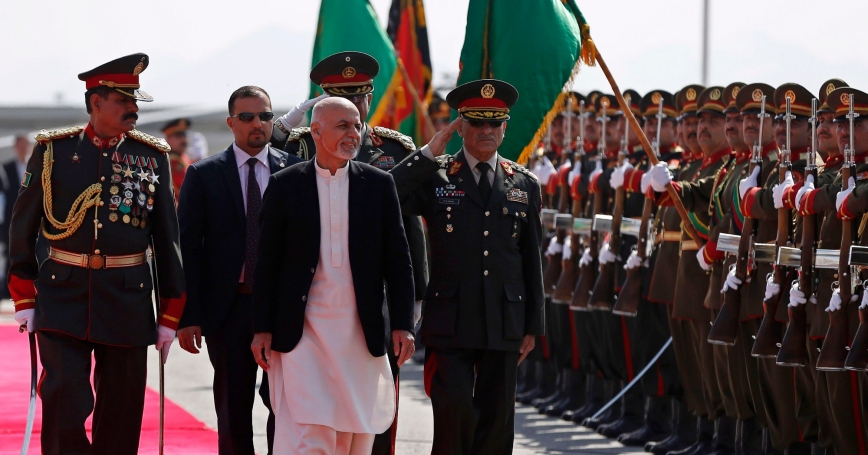 Afghanistan's President Ashraf Ghani inspects the honour guard during a graduation ceremony at the National Military Academy in Kabul, March 18, 2015

With Afghan President Ashraf Ghani's first official visit to the United States set to begin Sunday, a trio of RAND researchers discuss what to expect after the president and his chief executive officer, Abdullah Abdullah, arrive in Washington.

Ambassador James F. Dobbins is a veteran diplomat and senior fellow who served as Obama's special representative for Afghanistan and Pakistan; Rebecca Zimmerman is an associate policy analyst who conducted field research in Afghanistan; and Jason H. Campbell is an associate policy analyst who met with Afghan officials and citizens during a NATO-sponsored trip to the country last year.

Since the drawdown of U.S. troops in Afghanistan is expected to be at the top of the agenda, what do you expect the Obama administration to announce?

James Dobbins: I believe that the administration has considered slowing the rate of decline later this year into next, but not the deadline for full withdrawal, which is the end of 2016. So I don't expect any announcement on the latter, although it will be interesting to see how vigorously the administration continues to defend this date.

Rebecca Zimmerman: I agree. Based on its previous statements with respect to troop presence, I expect the administration to announce only minor changes to its game plan. Actual numbers will be driven at least in part by the desire to keep open several large coalition military bases a bit longer. This does not preclude additional changes down the road, of course.

Jason Campbell: The discussion will likely be focused on the tempo of the scheduled drawdown rather than extending its end date beyond 2016. As it stands, the U.S. will be able to keep more than the initially prescribed 5,500 or so forces in Afghanistan beyond 2015. This could mean that bases in places such as Kandahar, Jalalabad, and Bagram can be kept open longer than originally planned and that the coalition can maintain more of a regional footprint as opposed to becoming exclusively Kabul-focused.

Is the administration considering keeping troops in Afghanistan past 2016?

Campbell: It would not surprise me if Ghani began putting out feelers for troop commitment to endure beyond 2016, but such a commitment from Obama is unlikely at this point. Down the road, if the deadline for troop withdrawal is extended beyond 2016, the location and mission set would depend on the numbers they would maintain, but it would most likely remain heavily tilted toward training and mentorship.

Dobbins: The 2016 presidential candidates will also be expected to address the troop withdrawal, since the level of U.S. forces in 2017 is ultimately the next president's choice. If both party's candidates say they support a continued presence, I doubt Obama will try to deny them that option. So in the end, I expect the December 2016 deadline to recede.

Zimmerman: I think this administration is really disinclined to extend the 2016 deadline, but of course a new team might feel differently. I'm torn about this myself, to the extent that U.S. troops can be a stabilizing, reassuring influence in Afghanistan, I'd like to see them continue to play a positive role. At the same time, U.S. military influence in Afghanistan is — appropriately — waning. The U.S. will have to be sure that there are specific and achievable objectives associated with any extension of its military presence.

What else do Ghani and the Obama administration want to get out of this trip?

Dobbins: They both want to highlight that a new more attractive leadership is in place in Kabul, one committed to reform, women's rights, anti-corruption and good governance. Ghani will want to get — and Obama will want to give — encouragement to pursue the possibility of peace talks with the Taliban. Ghani may seek additional or expedited financial support because the Afghan budget situation is bad going on dire.

Zimmerman: I think that the administration is dismayed at the slowness of the unity government to appoint a cabinet and begin to implement its agenda. I expect that administration officials will underscore the fact that minor disagreements cannot be allowed to undermine the effectiveness of the government.

Dobbins: Yes, Obama will want to press both Ghani and Abdullah to move ahead more quickly to get ministers and governors in place and begin implementing the intended reforms.

Campbell: Ghani and Abdullah understand that Washington sets the tone when it comes to much of the international backing dedicated to Afghanistan; and securing long-term commitments of support will be their primary goal. So a top priority for them should be to get in front of Americans and assure them that Afghanistan's long-term stability and prosperity is in everyone's interest, and that they are the new leadership capable of implementing the necessary changes that will ensure Afghanistan is making the most of the international support it receives.

Aside from that, it is clear to everyone that Afghanistan will require monetary assistance for the foreseeable future to maintain its security forces and stimulate its economy, and I'm certain this will be discussed as well.

What is the outlook for a peace agreement between the Afghan government and the Taliban at this time?

Zimmerman: Peace agreements always sound like good things, and the administration will want to support those efforts. But it's important the administration consider that negotiations are not without risk, and now is not the most likely time for those efforts to flourish. The Taliban is in a fairly strong negotiating position, given the international withdrawal and the perceived weakness of the Afghan government. A failed negotiation or one that gives too much to the Taliban would further weaken government legitimacy. Moreover, because these talks are coming about through a budding relationship between Ghani and the Pakistani government, some Afghans fear a deal that puts the them too far in the Pakistanis' debt.

Finally, negotiations often cause hard-liners to splinter from rebel groups, and with the potential ISIL threat in the country, it is important that negotiations not inadvertently lead to an even more complex and entrenched situation. The U.S. should advise caution, push for the unity government to implement its promised reforms, and keep a close eye out for signs of splintering among armed groups.

Campbell: Substantive peace talks are still a ways away, though there have been some positive recent developments. For instance, Ghani's efforts to elicit increased support from Pakistan seems to have paid off. Particularly following the tragic attack in Peshawar last December, Islamabad appears to have taken a new, more resolute stance against extremism and its public pronouncements are more sanguine about the need for regional stability than they have been in years.

While Ghani and Abdullah have expressed interest in engaging in talks, the degree to which there is consensus among the political elite in Kabul as to negotiating points and red lines is questionable at best. The general tenor surrounding peace talks is as positive as it's been in a while but productive discussions will take time.

Dobbins: Yes, Ghani has made great progress in improving his relations with Pakistan, and the Pakistanis have responded positively. The Chinese are also interested in promoting reconciliation and have also been pressing the Pakistanis. But actual peace remains years away, at best.