Stop Putin's Next Invasion Before It Starts 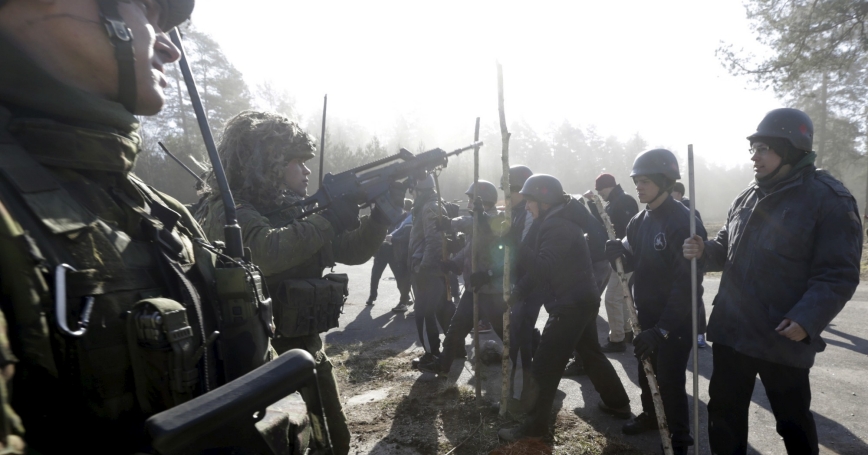 The Lithuanian Army's rapid reaction force unit, first formed in Nov. 2014 in response to Russia's annexation of Crimea, carries out a drill in Rukla Mar. 19, 2015

During the Cold War, the United States would deploy forces across the Atlantic Ocean to Europe annually to conduct training exercises and demonstrate to the Soviet Union that it could and would rapidly reinforce its allies in a crisis. It is time again to return U.S. forces to Europe, but in a different context. There are a number of alternatives that should be explored. Here's one.

The United States needs to seriously consider stationing forces in Eastern Europe to support the nation's commitment to protect the independence of the Baltic republics of Estonia, Latvia and Lithuania — NATO members all — against the specter of Russian aggression. Demonstrating American will and capability to respond promptly and powerfully will send a strong deterrent signal to Moscow. If the United States does not and Russia invades, the options available to this or a future U.S. president are stark.

Geography makes the Baltic republics vulnerable to Russian aggression. Should Russia choose to attack, no one seriously thinks that their defense forces and the other NATO troops currently in or close enough to Eastern Europe to respond could stop them.

Unclassified RAND war games indicate that Russian forces could overrun local defenders and the light U.S. and NATO units currently able to respond within as few as two days. While the capitals and a small number of key points could be held for some time, Russian forces could seal the border between Lithuania and Poland, prevent reinforcement by sea, and confront NATO with a fait accompli.

Once secured, these territorial gains would be defended by heavy ground forces occupying the conquered states, along with very capable Russian anti-air and anti-ship defenses on Russian territory. Any serious attempt to liberate Estonia, Latvia and Lithuania would entail attacks to suppress these systems.

If a Russian invasion of the Baltic states could not be deterred or defeated, the North Atlantic Council and the U.S. president would be faced with a very unpleasant choice: conduct a costly counteroffensive and risk nuclear escalation, or abandon the Baltics to renewed subservience to Moscow. Such a catastrophic failure to uphold the mutual defense responsibilities of NATO could cripple or even destroy the North Atlantic alliance, one of Russian President Vladimir Putin's primary goals. It is therefore of paramount importance to deter Russian aggression before it happens.

Unless one is sure that Putin's Russia would not take these steps — a dangerous gamble, given Moscow's recent track record — the United States and its NATO allies need to be able to deter, and if need be defeat, Russian aggression in the Baltics.

Our analysis indicates that a NATO armored brigade combat team in each of the three Baltic states, supported by powerful tactical air forces, a division headquarters to exercise tactical command, and a corps headquarters to plan and oversee the campaign, would provide a reasonable deterrent signal and the capabilities to prevent a short warning coup de main, fundamentally altering Moscow's deterrent calculus. These should be comprised of both U.S. and other NATO forces. Follow on forces would be required to win should the Russians attack.

Placing heavy brigade equipment sets in the Baltics or elsewhere in Eastern Europe, to be drawn by soldiers flown quickly there from the United States in a crisis, is one option for providing this deterrent. However, if Russia were willing to invade NATO countries it would be tempted to, and likely could, destroy these equipment sets before U.S. forces could arrive to draw them.

Situating this equipment further west in Europe would improve its survivability. However, the challenges of quickly mustering and deploying three heavy brigades of personnel to Western Europe (there will only be nine in the Regular Army after the planned draw down, so one-third would need to be on constant alert), drawing the equipment from warehouses and motor pools, road marching hundreds of kilometers across Europe, and perhaps fighting through Russian positions that could be quickly established along the Lithuanian-Polish border in time to prevent a fait accompli are enormous. The chances of success would not be good.

We therefore conclude that, these units should be stationed in Eastern Europe — Poland, Estonia, Latvia or Lithuania — to be most effective. At a minimum, enough military and civilian personnel would need to be deployed near the equipment at all times so that it could be drawn from its warehouses at the first sign of increased tensions.

Cost will be a consideration. However, the investments needed to return these forces to Europe and maintain them there are, conservatively, less than $200 million up front to move them there and $100 million per year more than if they were in the United States to support and train them thereafter. These would be quite modest investments in the context of a $16 trillion economy and a $550 billion annual U.S. defense budget, and given the potential strategic consequences of a successful Russian attack.

Terrence Kelly is the director of the Strategy and Resources Program at the RAND Arroyo Center and has been a senior operations researcher at the nonprofit, nonpartisan RAND Corporation.

This commentary originally appeared on U.S. News & World Report on March 20, 2015. Commentary gives RAND researchers a platform to convey insights based on their professional expertise and often on their peer-reviewed research and analysis.