The Allure of ISIS for Young Recruits 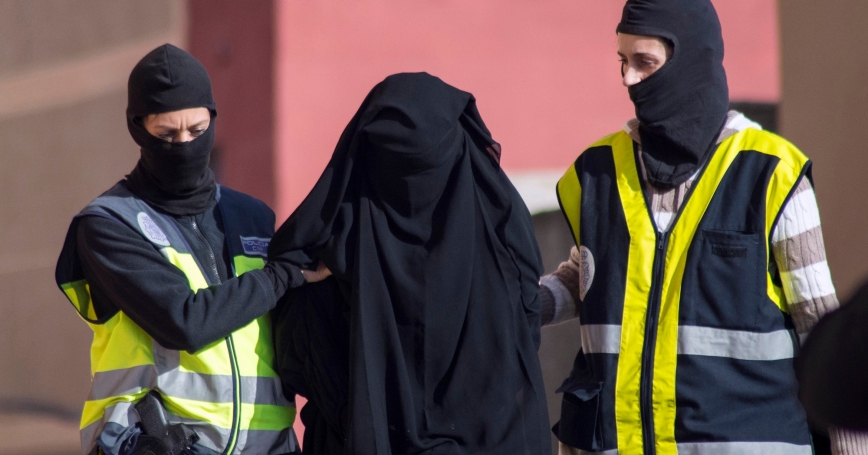 The Islamic State in Iraq and Syria (ISIS) runs a cutting-edge recruiting program, disseminating news of its highly publicized victories — and equally well-recorded atrocities — through social media and the Internet. ISIS makes a point of appealing to its potential recruits' sense of religious duty, even though volunteers may not possess a profound knowledge of Islam. Like all true believers, they may be attracted by a simple black and white, us-versus-them belief system that historically has held sway among the young.

Young men may be equally seduced by visions of adventure or they may want to escape the frustrations of life in the West. ISIS recruitment increasingly takes in impressionable young women and teenage girls attracted to jihadist bad boys, boasting about their bloody deeds. One measure of the recruiting campaign's success: As governments the world over try to prevent teens from becoming jihadist warriors, they are arresting them with startling regularity.

Days apart in March, a 19-year-old from Brooklyn, N.Y. and two teenage brothers from Australia were arrested at their local airports, all suspected of trying to sign up for terrorist duty and fight for ISIS. Three teen girls who disappeared from London in late February left home to join the violent jihadists, radicalized without their family's knowledge, according to media reports. Mystified family and friends said the same last fall when three teen girls from a Denver suburb, including two sisters, were intercepted on their way to Syria. Some of the girls were as young as 15.

Poverty and oppression may explain why people in some countries embrace violent extremism, but it does not account for the flow of Western volunteers or the dreamy allure of fighting for a faraway cause. Biographies of those who have reached out to participate in jihad suggest a variety of motives, including alienation, personal crises, dissatisfaction with empty spiritual lives — and adolescent rebellion.

According to intelligence estimates, 20,000 fighters from other countries have joined the fight in Syria and Iraq. Most are believed to be members of ISIS, making up a large portion of the group's strength. They mainly come from other Arab countries, but an estimated 3,400 of these volunteers are from the West, especially Europe, and pose an additional threat because they may be eligible to enter the United States without a visa. The French prime minister recently said the total number of Europeans going to Syria and Iraq could rise to 10,000 by the end of the year.

ISIS distinguishes itself from other jihadist groups by publicizing its seemingly limitless violence. This attracts a self-selecting group of individuals who are not repelled by graphic images of mass executions, beheadings, crucifixions and burnings — and who may actually be attracted by the opportunity to participate in such atrocities.

The strategy is creating a dangerous population of fervent and ruthless recruits that cannot easily be pacified or reabsorbed into everyday life. A long-term terrorist threat that survives the destruction of ISIS could include these scenarios:

While there is no present indication that ISIS has initiated a terrorist campaign aimed at directly attacking Western foes at home, the group has taunted and threatened the West in widely disseminated videos showing gruesome murders of Western nationals. It has called upon supporters abroad to carry out similar acts of terrorism and praised those who have done so.

If ISIS is brought down, where will its foreign fighters go? Some will migrate to other fronts in Afghanistan, where ISIS has already set up shop; to the still-restive Caucasus in Russia that many of its foreign fighters and a number of commanders call home; or to Libya, where ISIS has found new allies. Some Western volunteers, disillusioned by their experience and with nowhere else to go, will simply want to come home. Others will direct their wrath toward the West.

The defeat of ISIS could turn into a scenario of slaughter as victims of its cruel occupation and even its one-time Sunni allies turn against it. But its destruction could shatter the enterprise into a host of small, desperate groups on the run and bent upon revenge.

Foreign fighters from other countries seeking to enter the United States are more likely to have malevolent intentions than returning Americans. Only about 150 people from the United States have headed to jihadist fronts, according to a recent estimate. They still could be a threat, but given their still modest numbers, it is one that can be managed with existing law and resources.

The capability of ISIS fighters to put together large-scale terrorist operations in the United States may be limited, but their intentions are not. The prospect of engaging in violence is often a principal attraction of a terrorist group, and ISIS has set a new benchmark for brutality. Having crossed the line into nihilism, there may be no way back for many of the fighters. Even if ISIS is defeated in Iraq, the threat won't end there. It may have only just begun.

Jenkins is senior adviser to the president at RAND, a nonprofit, nonpartisan research institution.

This commentary originally appeared on The Hill on March 20, 2015. Commentary gives RAND researchers a platform to convey insights based on their professional expertise and often on their peer-reviewed research and analysis.