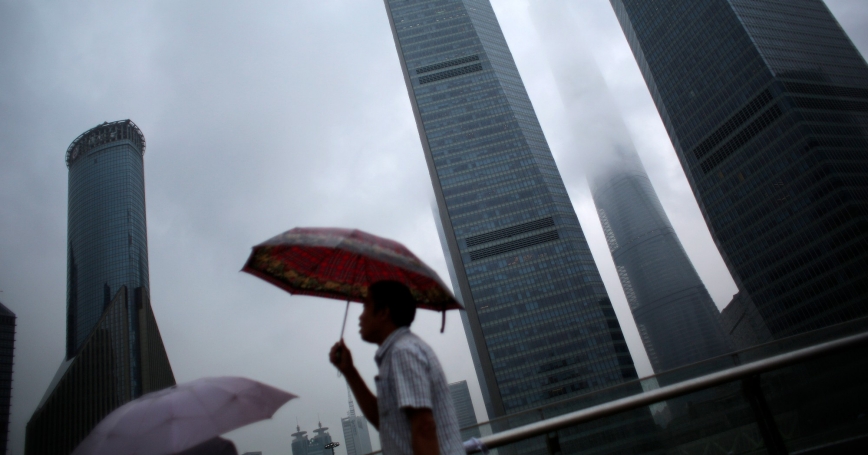 After China supplanted Japan in 2011 as the world's second-largest economy, some China scholars, as well as pundits and economists, began forecasting when it would supplant the United States as the largest. Extrapolating China's remarkable 9–10 percent average annual growth in the prior three decades, these forecasters placed the GDP crossover in 2020. When China experienced a slowdown to 7–8 percent growth in 2012–2014, the crossover was deferred to 2024–2025.

Current and impending conditions in both economies suggest the recent estimates are likely premature as well, and by a substantial margin. Growth in China may decrease appreciably in the coming decades, while U.S. growth may increase at least slightly. A better forecast is that crossover between the two GDPs is unlikely to occur during the lifetimes of most readers of this article.

Start with conditions that portend further slowdown in China's growth. First are the long-term fundamentals: a gradually declining population, rapidly rising dependency ratios (between China's elderly and preworking-age populations and its working-age population), severe and worsening atmospheric pollution, serious water contamination and scarcity, and the rising costs to address these conditions.

Next are several recent growth-inhibitors, broadly reflected in President Xi Jinping's recurring references to the “new normal” of quality, efficiency, and medium growth, rather than the high growth of the past.

Another portent of slowdown is China's accumulation of the highest level of public and private debt in its history. Most of this is debt incurred at province, city, and township levels by loans from local banks and the unregulated “shadow” financial sector. Additions to this shaky debt raised the local deficit to $500 billion in 2014, about 5 percent of China's GDP. Although the central government isn't responsible for this debt, it's unclear who is. What is clear is that the local production, construction, social, and infrastructure projects that were financed by this debt and have helped propel growth will be sharply constrained in the future.

Also indicative of slower growth to come are surging capital outflows from China that rose to $120 billion in the fourth quarter of 2014, slightly exceeding total foreign direct investment into China for the entire year. This outflow includes private acquisitions of high-end foreign real estate and other precautionary foreign assets. The trend suggests that Chinese investors expect higher growth and higher returns from investment outside than inside China. Moreover, the actual outflow is probably larger than the estimates because of frequent under-invoicing of exports and over-invoicing of imports.

While nothing is inevitable, these conditions portend significantly slower growth in the future. How does the U.S. outlook compare?

Demographic and other fundamentals in the United States are mixed. According to World Bank estimates, the U.S. dependency ratio is higher than in China. And the percentage of the U.S. working-age population that is employed is lower than it's been since 2000. On the other hand, household debt is at a low ebb—a positive indicator for future consumer spending. Another positive indicator is the high rate of sustained innovation—much of it linked to information technology.

Since recovery from the Great Recession of 2008, U.S. growth has been 3- or 4-tenths below the long-term average 3 percent annual U.S. growth rate, and much below the rate realized in prior recoveries. Several conditions portend at least modestly higher growth ahead.

The policy environment is likely to be friendlier than businesses—both large and small—have experienced in recent years. Possibilities on this front include tax reform (perhaps lower corporate rates, lower rates on repatriation of profits held abroad), lighter and smarter regulatory policy (perhaps a clearer “Volcker rule” on banks' capital requirements, and bank-trading limited to banks' own capital), and simpler and clearer rules (by the Commodity Futures Trading Commission) to reduce risks associated with complex derivatives.

Another growth-enhancing development likely to ensue from a business-friendly environment is a stimulus to technology innovation. While innovations in recent decades have mainly resulted from IT, future innovations may result from other emergent technologies, such as bio-genetics, robotics, and nanotechnology. A business-friendlier environment in the United States is likely to encourage innovation through reform of the present bureaucratized patent system so it better protects the property rights of innovators, while preventing abuse by patent trolls.

Finally, there is a real possibility of growth-promoting trade expansion from negotiations currently underway in both the transatlantic and trans-Pacific areas.

According to the International Monetary Fund, the U.S. and Chinese GDPs in 2015 are $18.4 trillion and $11.1 trillion, respectively. Assuming the average long-term annual growth rates mentioned above, China's GDP will remain slightly below that of the United States through 2055. Crossover would follow in the ensuing two years.

Two caveats should be added: First, to paraphrase Yogi Berra, it's hard to make predictions because nothing is more uncertain than the future; second, an economy's size (its GDP) is, at most, a partial and imperfect indicator of leverage and power in global economics and world affairs.

Charles Wolf Jr. holds the distinguished chair in international economics at the nonprofit, nonpartisan RAND Corporation and is a senior research fellow at the Hoover Institution.

This commentary originally appeared on The Weekly Standard on March 20, 2015. Commentary gives RAND researchers a platform to convey insights based on their professional expertise and often on their peer-reviewed research and analysis.