Tunisia Could Be a Model for What Works in the Mideast 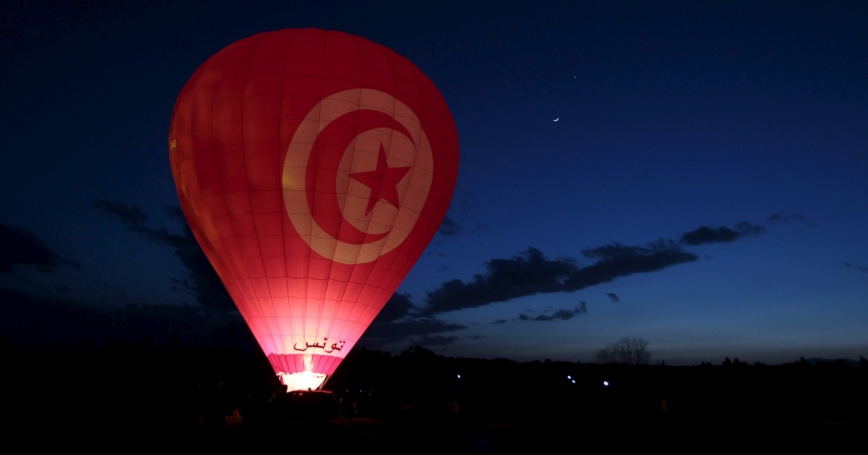 A balloonist fires the burners of his hot air balloon during the Tunisian Balloon Festival in Hammamet March 22, 2015

The tragic terrorist attack at the National Bardo Museum in Tunis last week put Tunisia on the map again, but for the wrong reasons. Although the nation faces serious terrorist threats from the spillover violence in Libya, Islamic State recruitment and Al Qaeda-linked groups, it is important that outsiders not get the impression that Tunisia is yet another failing Arab state on the brink of chaos.

Instead, it should be appreciated that Tunisia could offer a completely different model for the Middle East, one that values pluralism and development and that is bent on countering extremism.

To be sure, Tunisia has a long way to go to translate such aspirations into reality. Leaving Tunis for the airport recently, my taxi passed dozens of half-finished buildings. In many ways this characterized the mood in the country perfectly — a half-finished revolution.

Yet, there is a sense of optimism and pride that this first Arab Spring country is the only one to successfully complete a democratic political transition. The parliamentary and presidential elections in late 2014 led to an inclusive coalition government, dominated by the secular bloc Nidaa Tounes, or Call of Tunisia, and the Islamist Nahda party. Though Nahda only holds one cabinet position, it still agreed to join the government rather than remain an opposition movement. Learning lessons from the disastrous rule of the Muslim Brotherhood in Egypt, Nahda decided against running a presidential candidate.

The political process is still fragile, however, with many fissures among and within competing political and ideological factions. But the success of the election provides the opening for Tunisia's new leaders to stem division and violence and move toward growth and development. As many Tunisians are fond of saying, “this is our moment.” There is a sense that if Tunisians don't get it right now, they may never get back on track. Unfortunately, this may be the very reason Tunisia provides such an attractive target for extremists opposed to democracy and development.

Tunisians hope that the peaceful political transition over the last few months provides an opportunity to turn things around after a tumultuous four years. Walking around the city center and looking at the crumbling infrastructure, one has the sense that everything has been put on hold. Tunisians are ready to bring back normalcy and to spur development and growth. It would be tragic if the recent terrorist attack puts the nation's progress on hold again.

Coming in tandem with the optimism, though, are widespread concerns that the political achievements will not hold if leaders do not quickly deliver to the people. As one speaker at a conference I attended noted, Tunisia has had its political revolution, but the economic revolution hasn't begun. The main takeaway from the conference, well attended by Tunisia's top business elite and potential international investors, was that without economic development and investment, it would be difficult to lock in Tunisia's political gains and build a sustainable democracy in the Arab world.

The challenges are daunting. Unemployment is still higher than before the 2011 revolution, reaching 40% in some of the less developed and less privileged parts of the country. Old economic structures dominated by the state are still in place, with continuing concerns about corruption and low productivity. Concerns about stability continue to threaten investment. Even before the Bardo museum attack, instability in Libya and concerns about the extremist threat from within made it difficult to attract investors and lure tourists.

On the security front, Tunisia's forces were designed to look inward to protect the authoritarian regime of former President Zine el Abidine ben Ali, which ruled the country for more than 20 years. Tunisia never faced a significant conventional external threat. But now the merging of external and internal threats is greater than ever, requiring the restructuring of security forces that have not significantly evolved since the revolution. Security sector reforms will require balancing security concerns with the preservation of civil society and basic freedoms. This balance will only become more difficult in the aftermath of the Bardo attack, as the priority will inevitably shift toward stability.

So Tunisia is facing a critical moment, and its leaders understand they need to get it right. The United States and the international community need to get it right too. That means following through on offers of economic support if Tunisia fulfills its end of the bargain.

Official U.S. support, perceived as wavering in the past, now appears to be strong. U.S. Secretary of Commerce Penny Pritzker and other senior U.S. officials recently visited the country and unveiled a set of economic initiatives to spur U.S. investment and growth if Tunisian leaders implement key financial and economic reforms.

Tunisia has a shot at showing that a different model in the region can succeed, a model of inclusion, tolerance and economic prosperity. It has a lot of work ahead of it, but the vision is there.

Nothing can challenge the extremism of Islamic State and other militants more than an alternative model that works. The U.S. continues to rely on military tools to the detriment of political and economic levers in the Middle East. But Tunisia offers the opportunity to strike a better balance. Now is the time to double down and help Tunisia succeed.

Dalia Dassa Kaye is the director of the Center for Middle East Public Policy and a senior political scientist at RAND Corporation.

This commentary originally appeared on Los Angeles Times on March 23, 2015. Commentary gives RAND researchers a platform to convey insights based on their professional expertise and often on their peer-reviewed research and analysis.