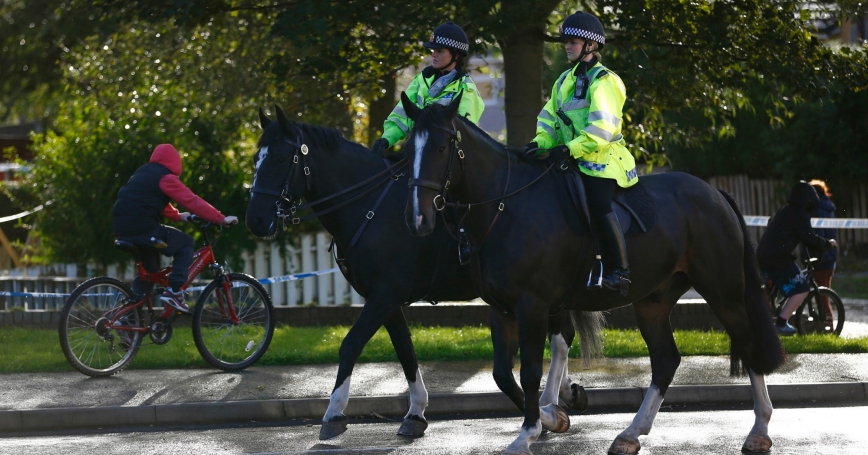 by Chris Giacomantonio and Ben Bradford

A recent study by RAND Europe and the University of Oxford found that neighbourhood patrols by mounted police in the UK are associated with comparatively higher levels of public trust and confidence than patrols by police on foot, as measured by population-representative surveys in the areas where patrols were deployed. Careful observations of what happens when people encounter mounted police could help to explain why.

Police on horseback are 12 feet tall and a relative novelty in urban neighbourhoods. We might therefore reasonably expect more people to notice police horses than foot patrols. There is strong evidence from prior research that police visibility is linked to trust and confidence. We might in turn conclude that mounted police are simply a higher-visibility policing option, and that any effort to get people to notice police would have a similar trust-enhancing effect.

However, the reason why the presence of police horses in neighbourhoods influenced trust and confidence in the police — how people felt about the broader police service they'd received in the neighbourhood — may be slightly more complex than sheer visibility. Moreover, these effects were recorded after a rather small amount of mounted police activity in the areas where horses were deployed — none of the areas surveyed saw more than 20 hours of mounted police patrols in the entire one-month experimental period.

So how can we explain this effect on trust and confidence from such a small 'dose' of mounted policing? To help better understand the differences between mounted and foot patrols, the researchers followed these patrols during their public duties. In the course of doing so they recorded what may be an important difference between foot and mounted patrols beyond the visibility of the latter. Specifically, the researchers found that members of the public engage with mounted police over six times as much as they engage with police on foot, across similar time periods. In this context, engagement can be anything from a simple greeting to an extended conversation.

It appears that while mounted police and police on foot generate about the same number of extended interactions with citizens during their patrols, mounted police generate substantially higher numbers of brief casual engagements — waving, people pointing to and talking about the police, saying hello to the officer, children patting the horse, and so on. More substantive engagements with mounted police also tended to be slightly more positive overall than engagements with police on foot, but by and large engagements between police and the public in this study were positive in tone, whether there was an equine presence or not.

It seems, therefore, that it is not simply visibility but also the volume of (broadly positive) engagement that makes the difference here. These research results may tempt policymakers to believe that any police visibility is good, or conversely that these results are only relevant to police on horseback.

Certainly, there is something unique about policing on horseback and this contributes to the volume of engagement. However, we wish to draw out a broader principle about police visibility in public spaces. Specifically, this research suggests that it is the coupling of police visibility with the potential for positive engagement that underpins the effects of these patrols.

That police can be seen, and seen as approachable, would both appear to be important factors that influence public opinion of the police.

Chris Giacomantonio is an analyst at RAND Europe with interests in criminal justice and social policy. Ben Bradford is Departmental Lecturer in Criminology at the University of Oxford, researching issues of trust and legitimacy in the criminal justice system.