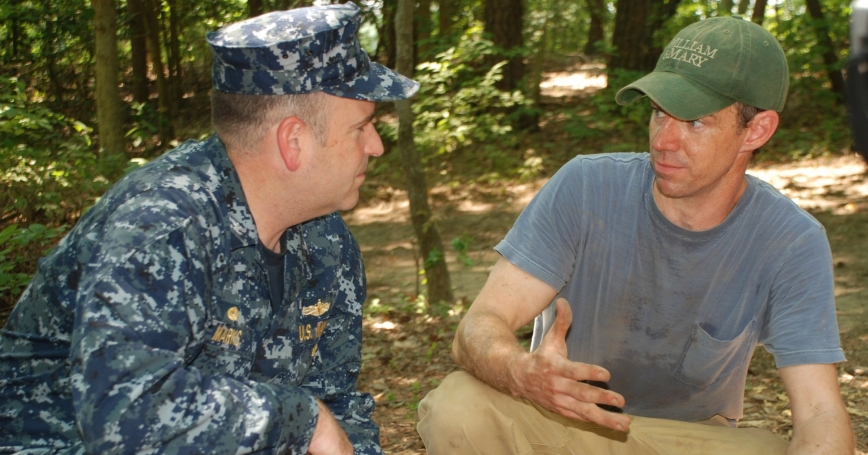 Capt. Chuck Marks, commanding officer of Naval Weapons Station Yorktown, listens to Martin Gallivan, associate professor of anthropology at the College of William and Mary, discuss the artifacts his students uncovered during the excavation of a Powhatan Indian village, a field study conducted under a cooperative agreement between the Navy and the college

When commentators talk about the civilian-military divide, they often mention the dwindling number of Americans who serve in uniform, the high costs of sustaining an all-volunteer force, and the myriad stories of senior military officers who act as though they are beyond civilian control. Another facet of the problem is the mutual opacity of two influential communities that should have much to offer each other: military officers and civilian academics.

If senior officers and academics find themselves divided, is there a way to build respect and trust earlier in their careers, when less is at stake and time a bit more abundant? With support from the Stanton Foundation, RAND recently explored one modest possibility: a tabletop exercise that brought future leaders together.

The exercise presented a contemporary geopolitical problem that might require a military solution. It brought together an accomplished group of field grade military officers (lieutenant colonels, colonels and Navy captains) and emerging academic and policy experts at the assistant professor or postdoctoral levels. The scenario, designed to require both civilian and military expertise, ensured that neither group had all the answers....

Paula Thornhill is a senior political scientist at nonprofit, nonpartisan RAND Corporation and serves as a RAND representative to the Stanton Foundation. She is a retired U.S. Air Force brigadier general, having last served as commandant of the Air Force Institute of Technology.

This commentary originally appeared on Defense One on April 3, 2015. Commentary gives RAND researchers a platform to convey insights based on their professional expertise and often on their peer-reviewed research and analysis.