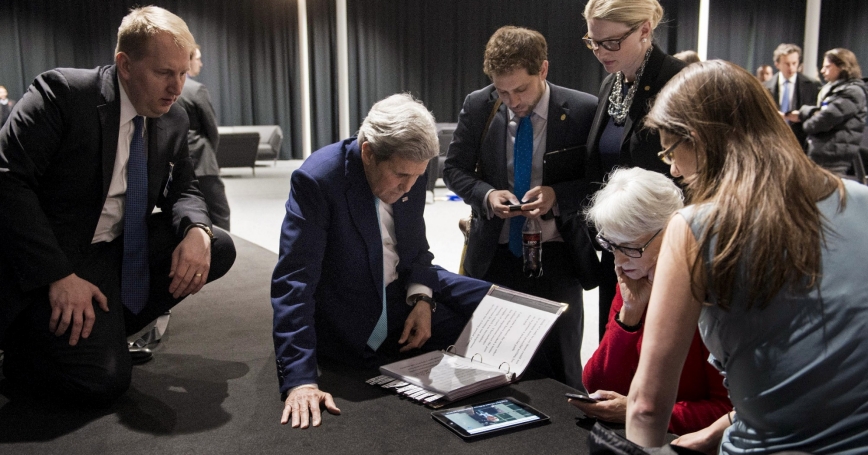 In interviews following the announcement of the framework agreement in Geneva, U.S. President Barack Obama suggested that a final nuclear deal could be the start of a new relationship between the United States and Iran. Iran's regional neighbors are worried about a deal for exactly these reasons—that a deal could tilt the regional balance of power in Iran's favor.

Yet fears that a deal will lead to a major readjustment in U.S. regional strategy are overblown. Even if the administration is interested in reorienting its regional policies, there are a number of obstacles that will stand in the way. In other words, as significant as a final nuclear agreement would be, it may not prove transformative—at least not without considerable effort.

To begin with, the United States will likely pursue post-deal policies that contradict broader engagement with Iran. It is nearly a given that the United States will want to give a number of “assurances”—increased security assistance and cooperation (especially on missile defense)—to close partners. Reports suggest that Israel may be expecting U.S. pledges to protect Israel's own nuclear deterrence capabilities. This will be tricky, since the Saudis will likely press the United States to do the opposite: build a nuclear-free Middle East by insisting that Israel get rid of its own capabilities. The United States won't be able to do both. Meanwhile, stepped up U.S. security cooperation with its Arab allies in the region could lead Iran to feel encircled, which could embolden the hardliners who argue against expanding cooperation with Washington.

Indeed, Iran's own behavior in the aftermath of a final deal could also get in the way of better relations with the West. Although Iranian President Hassan Rouhani has signaled his desire for improved ties, conservative forces in Iran likely still want to use Shia militia and parties in Iraq, Lebanon, Syria, and Yemen to advance Tehran's interests. Although Iranian power and influence in the region are often exaggerated, Iran's neighbors believe that the country has been making good use of the regional turmoil caused by the Arab Spring and, more recently, the Islamic State of Iraq and al-Sham (ISIS) to expand its reach. If Iran is eventually given credit for pushing ISIS back in Iraq, perceptions in the region that Iranian power is increasing as U.S. influence is decreasing will only strengthen. In those circumstances, it will be difficult for the United States to pursue new strategies that incorporate Iran into its regional planning.

Finally, the United States' regional partners are not likely to sit quietly on the sidelines. Key players such as Israel and Saudi Arabia will likely adapt to a nuclear deal once it's final, but a deal will certainly increase their desire to push back Iranian influence on non-nuclear fronts. For Israel, the warfighting capabilities Hezbollah has gained from its intervention in Syria will be of greatest concern. For the time being, neither Israel nor Hezbollah is interested in a war, but miscalculations could lead to a future conflict, especially if Hezbollah finds value in focusing its attention on Israel as a distraction from its losses in Syria. A new confrontation with thousands of Iranian-supplied missiles raining down on Israel would certainly get in the way of détente between the United States and Iran. And as in Yemen today, the Saudis may be more inclined to counter aggressively what they perceive as Iranian-backed groups in region, which will lead the United States to support their efforts (as it has recently announced it will do in Yemen) rather than work to de-escalate tension.

All of this suggests more continuity than change in U.S. strategy in the Middle East. It will be difficult for the United States to break out of its current hedging policies given its longstanding mistrust of Iran and a military posture largely designed to counter Iranian influence. Despite such constraints, however, it would be wise to capitalize on the potential openings created by a deal and test whether new opportunities for engagement might be possible.

This means managing tensions in the region in ways that do not perpetuate U.S.-Iranian conflict. For example, the United States might, at times, need to reject regional partners' requests for U.S. intervention in local conflicts even while continuing to ramp up its security assistance and training in the fight against extremist groups like ISIS. Assurances to regional partners should be structured to maximize a sense of security while minimizing perceived aggression toward Tehran.

After the deal, the United States should also launch new regional initiatives, including a broader regional security summit that includes Iran, because, whether Washington likes it or not, Tehran plays a role in nearly every regional security challenge today. Increased Iranian engagement with the Gulf Cooperation Council will be particularly important. Continued sectarian divides are a losing proposition for people in the region and for U.S. regional interests. The United States should not engage in policies that fuel sectarianism and risk entanglement in regional rivalries.

The United States can't wait for a final deal to begin thinking through how to manage its aftermath. The challenges ahead are already clear. Washington should prepare for them by setting aside old formulas that have failed to advance stability. The United States may have an opportunity to try new approaches to the region, but it won't be easy, and it can't be an afterthought.

This commentary originally appeared on Foreign Affairs on April 9, 2015. Commentary gives RAND researchers a platform to convey insights based on their professional expertise and often on their peer-reviewed research and analysis.