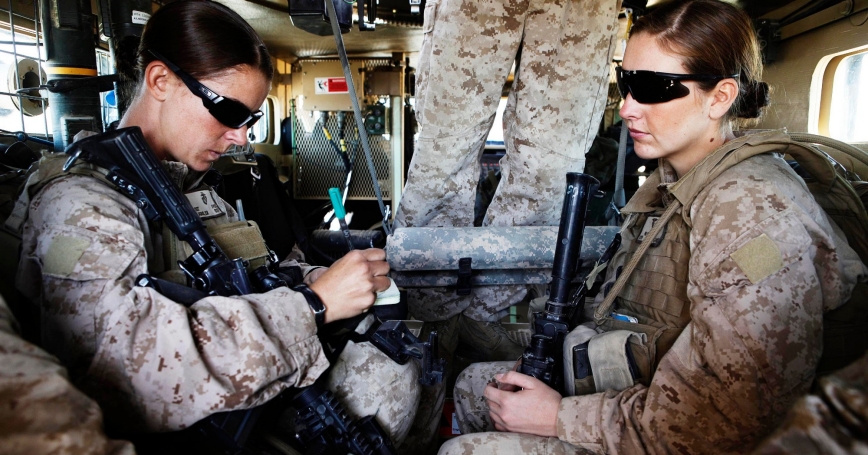 “Was it an IUD?” the elderly gentleman asked as I walked my three-legged German shepherd in the park.

“Did she lose her leg to one of them IUDs in Iraq?” he pressed.

Now I got it. “You mean IED—and no, she's not a retired military dog.” Walking on, I realized that, day to day, more people assumed that my dog was a combat veteran than that I was.

As a kid, I was a tomboy: wearing jeans and sweatshirts, playing war with the boys, eschewing pink. When I was a teenager in the '90s, most of my friends were guys. Perhaps it is no surprise, then, that I ended up in the Army a few years after college; I was used to wearing combat boots, inhabiting a male-dominated world and trying to be tough.

After coming home from my tour in Iraq, I fell in love with and later married Brian, a fellow soldier who had sustained a penetrating traumatic brain injury from a roadside bomb in Iraq and as a result had PTSD— post-traumatic stress disorder. Struggling to cope with my own transition home from combat, at first I did not understand how deep his wounds ran. By the time I grasped the extent of his psychological and cognitive injuries, we had fallen in love, and abandoning him was unthinkable. The first few years of our relationship, I was absorbed in helping him recover and building a stable life for us while feeling ashamed of how hard it was to do those things. Having both absorbed the Army ethos of “suck it up and drive on,” we were loath to admit to what felt like weakness. Brian got raging drunk and had violent outbursts, but I was too embarrassed to admit, even to myself, that my personal life was in crisis. Rather than try to find help for him, I concentrated relentlessly on improving our finances, going to graduate school while working full time.

Slowly, our efforts paid off: Our lives stabilized, and Brian began to recover. He got a job, stopped abusing alcohol, began volunteering for a veterans' organization and learned to compensate for his cognitive deficits and manage his mental health. Only then did I have the space to step back and ask myself if I was OK. And the answer came: I was not. Without the urgent mission of helping Brian function, I felt bereft, brittle—and isolated. As a woman, I was at least as much of a minority in the veterans' community as I had been in the Army. People assumed that only Brian was a veteran; on learning I'd been a soldier, too, they incorrectly assumed I'd never left the relative safety of secure Forward Operating Bases. Once again, I felt pressure to prove that I belonged.

During my yearlong deployment to Iraq, I had spent months as the only woman at a remote outpost on Sinjar Mountain near the Syrian border. Desperately missing my best friend, Stephanie, and longing for the comfort of being intimately understood, I'd realized for the first time how much I needed the company of women. Years later, that loneliness was back. Stephanie lived on the opposite coast, and while we stayed in touch by email and phone, it wasn't enough. One of my friends from the Army lived in my area, but once she left the service, she preferred never to discuss it, because that brought back the stresses of combat. So there was no way to reminisce with her. Brian had developed into a wonderful husband, but just as I could not understand getting blown up, he could not fully comprehend being a military woman.

Five years after I got out of the Army, a weeklong, women-only Outward Bound trip, kayaking on Lake Superior with other female veterans, cracked my brittle shell. I was with a group of strangers who—simply by virtue of shared experiences as women in the military—knew more about my life than many of my family members. The trip forced me to relinquish the control I was trying to exert over my surroundings and admit my fears and vulnerabilities. Roles rotated daily—navigator, cook, cleaner—and one day I was told that my job was to do nothing. It was almost physically painful to sit by while others worked, but being forced to recognize that those around me could solve problems independently left me with an equally tangible feeling of relief.

The last day, we went rock climbing, an activity I'd enjoyed before breaking my ankle in a fall at an indoor gym a few years earlier. After rappelling to the bottom of the cliff, I froze: The sound of bone breaking echoed in my memory, and I was paralyzed with fear. The other women shouted encouragement until I got the nerve to clamber back up. At the top, turning to one of them, I burst into tears: “I used to be good at this! I used to enjoy it! I used to listen to my body, trust myself, believe in my abilities on the wall, have fun—oh.” It wasn't just rock climbing that I was talking about. The woman laughed and hugged me. I felt lightened, liberated—understood.

Back home, I wanted that feeling all the time. Luckily, my friend Carolyn soon started a women veterans' book club, though perhaps wine club is more accurate. We read books that have a military theme as well as lighter ones—and although I didn't serve with any of these women, each time we get together is a reunion with a part of my life that was profoundly important.

With these people, I feel no need for pretense. I can be proud of my strengths while admitting my weaknesses. I do not feel conflicted about whether to be tough or beautiful when I'm with these women who have all worn fatigues and now look great in cocktail dresses. Together we crack jokes about changing uniforms during sandstorms and coping with sexual harassment. We talk about breast-feeding and battle rhythm. And we all know the difference between an IUD and an IED.

Kayla Williams is a project associate at the RAND Corporation, a Truman National Security Project Fellow and the author of Plenty of Time When We Get Home: Love and Recovery in the Aftermath of War.

A version of this commentary originally appeared in the March 2015 edition of More Magazine.