Seduced by a Strongman? 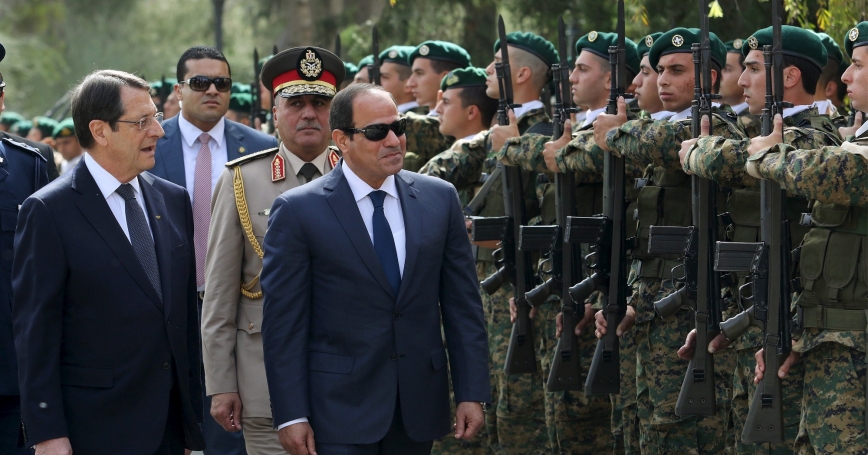 Cairo is coming unhinged. From razing a buffer zone between the Sinai Peninsula and the Gaza Strip, to criminalizing membership in the Muslim Brotherhood, to using lethal force against activists who violate the country's protest law, Egyptian President Abdel Fattah al-Sisi has crafted an internal security strategy heavy on birdshot, bulldozers, and pliant judges.

Foreign policy realists may argue that Egypt's domestic problems are its own; they don't change U.S. strategic interests. The Obama administration's release of previously embargoed military aid to Egypt—and simultaneous concession that the country's human rights record is cause for concern—would seem to align with that reading.

However, it is not true that domestic politics can be quarantined from foreign policy. In fact, Egypt's domestic and foreign policies are becoming more entangled by the day. And that bleed-over should raise concerns.

The Near and Far Enemy

In its approach to internal security, the regime fails to differentiate—and some would argue purposefully conflates—extremists with non-violent political opponents. As Egyptian Foreign Minister Sameh Shoukry recently argued, “the difference between the Muslim Brotherhood and the Islamic State is not large.” Such sentiments are nothing new in Egypt, but what is new is the fervor the regime cultivates in rooting out the Islamist scourge and its translation into foreign policy.

During the Muslim Brotherhood's political ascent after the 2011 Revolution, those opposed to the group became wary of what they referred to the “Ikhwanization” of the state. From security personnel sporting beards to banks issuing bonds that conformed to principles of Islamic finance, opponents of the Muslim Brotherhood saw these developments as signs of an Islamist takeover. After the Brotherhood was removed from power in 2013 and was subsequently declared a terrorist organization, the new government pushed to “de-Ikhwanize” the state—a pursuit that extends to the foreign policy realm.

In the early days after Morsi's arrest, a purge mentality led to the removal of government officials feared to be sympathetic to the Brotherhood. The Foreign Ministry, which was not penetrated by the Brotherhood during Morsi's short rule, escaped the same level of scrutiny as other ministries. But the diplomatic corps still had to pass the loyalty test of defending regime excesses as they cracked down on the Brotherhood. To this end, Egypt's Ambassadors trotted out talking points comparing the Brotherhood to Nazis while dismissing the regime's killing of protestors as equivalent to security measures employed in Western countries.

The de-Ikhawanization of Egyptian foreign policy extends beyond the Foreign Ministry using its pulpit to demonize the Brotherhood. The Sisi regime also sees itself as the tip of the spear in a broader Islamist rollback. Like at home, the regime plays on concerns of the very real extremist threat facing the region as a pretext for striking Islamists of all stripes. Egypt has been most active in exporting this model to Libya, where Cairo and Abu Dhabi back a divisive general, Khalifa Hiftar, who shares their similarly expansive view of terrorists. The scope of Egyptian support to Hiftar and his so-called Operation Dignity is unknown, although it is widely understood that Egypt facilitated the August 2014 Emirati airstrikes inside Libya that targeted Islamist factions. That intervention, along with Cairo's efforts to lift the arms embargo currently in force, have further polarized Libya's rival camps, complicating UN-led mediation efforts.

Thus far, Egypt has resisted the temptation to send ground troops into Libya. The strongest calls for that came in the context of the Islamic State's February 2015 beheading of 21 hostages, all but one from Egypt's Coptic Christian community, on the beaches of Sirte. Egypt's response was to launch airstrikes, this time overtly, and to hasten the evacuation of the large number of Egyptian workers in Libya. The risk is that provocations like these, combined with Egypt's desire to prevent an Islamist-led regime next door, will tempt Cairo to wade in farther in its backing of the anti-Islamists in the East and their allies in Zintan.

Even short of that, however, Cairo's policies in Libya, designed with the goal of hamstringing the Muslim Brotherhood over building a coalition government committed to genuine counterterrorism, are proving costly. The Sisi regime's penchant for seeing a Brother behind every bush is toxic. It pushes non-extremists to partner with extremists to resist a common enemy.

Perhaps the most pronounced shift in foreign relations under Sisi has been the degree to which Egypt relies on Gulf support to make up for its deteriorating financial position. According to the Egyptian Treasury, Saudi Arabia, the UAE, and Kuwait provided Egypt with $10.6 billion in assistance during fiscal year 2013-2014. Roughly 70 percent of that figure was comprised of in-kind grants of petroleum and the remaining 30 percent consisted of direct financial support. The $10.6 billion figure significantly underestimates the Gulf's total financial support to Egypt, since it does not include recent commitments made at the Sharm el-Sheikh economic summit, deposits made by GCC states in Egyptian banks to shore up that sector's liquidity, or foreign direct investment (FDI) intended to breathe life into Egypt's economy. And in several notable instances, Gulf FDI in Egypt has been channeled through the Egyptian military to specifically strengthen that institution's position within the state.

Egyptian officials have made it clear that Gulf support is not quid pro quo. If in reality it is, though, it wouldn't be the first time Cairo auctioned off its foreign policy. Egypt also received enormous debt forgiveness after it joined the U.S.-led coalition in the 1990-1991 Gulf War. And the $1.3 billion in military assistance it traditionally receives from the United States is generally considered compensation for “strategic benefits” that include the granting of military access in the form of overflight and expedited naval transit as well as Cairo's upholding of commitments to Israeli security that it made at Camp David and as part of the 1979 Egypt-Israeli peace agreement.

The concern is that Egypt's swing toward dependence on Arab Gulf aid will turn the country into an auxiliary force for the Gulf's conservative monarchies. Egypt's participation in the Saudi-led coalition that targeted the Houthi advance in Yemen is just one manifestation of that risk. That Egypt would bend over backwards for its patrons was further underscored when Sisi affirmed his willingness to commit ground forces to the fight in Yemen. Meanwhile, the potential that Egypt may eventually be called on to quell uprisings in the Gulf was the subtext of April 2015 joint military exercises between Bahrain and Egypt. Egypt could be playing with fire. At the regional level, campaigns like the Yemen operation tend to escalate proxy dynamics, as external backers in both camps, in this case Iran and Saudi Arabia, match the increased involvement of the other in a tit for tat fashion. And within Egypt, the operation raised the prospect of backlash from a public that has not forgotten its costly intervention in Yemen half a century ago. Indeed, polling shows that Egyptians would oppose a ground intervention in Yemen by a nearly 2:1 margin.

Speculation that Egyptian support for the Saudi-led campaign was recompense for the Gulf's financial aid to Egypt was serious enough to prompt Sisi to address it head on. Flanked by the uniformed leadership of the Supreme Council of the Armed Forces, a visibly annoyed Sisi rejected this reading of events by noting that it was Egypt's commitment to Arab security that prompted its participation, not the “repaying of a favor.”

Egypt's military activism was also on full display in the country's push during the recent Arab League Summit to establish a joint military force within the league. In response to the proposal announced by Sisi at the March 2015 summit, the Arab League agreed to establish a rapid reaction force that would safeguard the national sovereignty of member states and take on security threats including those posed by terrorist groups. Possessing the largest military in the region, it is assumed that Egypt would be a major troop contributor should the force ever take shape (which is, of course, an open question given the group's track record on realizing lofty initiatives).

Once again, there is an important domestic angle to Egypt's interest in the joint-military project. The Sisi regime argues that the military is the one institution capable of unifying, protecting, and modernizing Egypt (a narrative that is, of course, undermined by Egypt's deteriorating security situation). Now Sisi is looking for additional opportunities to position his military as a force for power, prestige, and security.

Mythmaking is one of the Egyptian military's core competencies, and being at the forefront of a joint Arab force for stabilizing the region is just the latest installment. In a speech describing what motivated the creation of a joint force, Sisi urged his military audience “to ask how their country could take the position it deserves among nation states.” Then gazing upwards for dramatic effect, an emotional Sisi added that it would be through “work, patience, building, and sacrifice, so that in this country, the people will look up at their country like this.”

Unfortunately for U.S. officials, there are no simple policy solutions. Indeed, those who criticize Egypt policy as an abandonment of principle in favor of narrow strategic interests are ignoring the “damned if you do, damned if you don't” nature of Washington's options. When the Obama administration moved, albeit belatedly, to suspend portions of assistance to Egypt in the wake of the military's removal of former President Mohammad Morsi, the regime in Cairo greeted the decision with defiance; there were no visible improvements in the Sisi's commitment to human rights or democratic practice. On the other hand, restoring the flow of aid has not produced a more constructive partner, and U.S. officials are fooling themselves if they think the minor adjustments made to the arrangement, such as gradually phasing out cash flow financing and linking acquisitions to a narrower set of military missions, are game changers.

Simply put, whatever wonky adjustments are made to the assistance package will not change the basic predicament. The United States is stuck with a partner that is unhinged—with all the problems that creates at home and abroad. Addressing that predicament will require acknowledging that alliance maintenance is not an end in itself. The metric for judging the U.S. relationship with Egypt and other Arab partners should not be how quickly the generals answer Obama's calls, but whether the relationship is a net benefit to U.S. interests. And that means being open to the possibility that it isn't.

This commentary originally appeared on Foreign Affairs on April 30, 2015. Commentary gives RAND researchers a platform to convey insights based on their professional expertise and often on their peer-reviewed research and analysis.