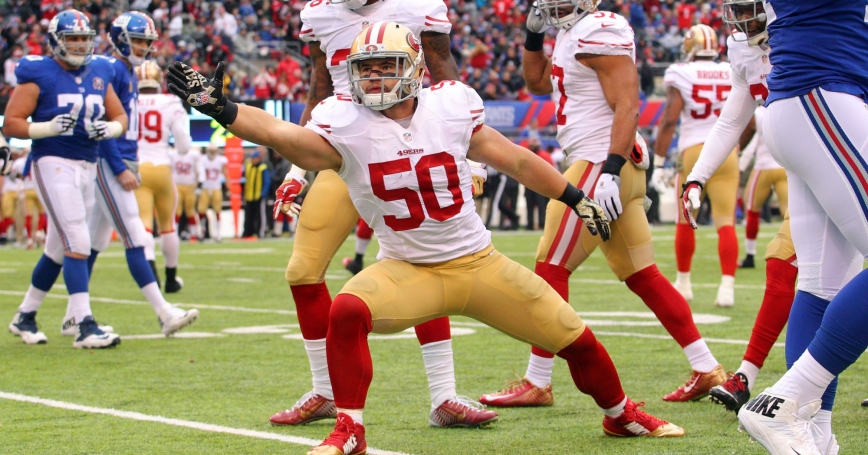 San Francisco 49ers linebacker Chris Borland signals a first down after an interception against the New York Giants at MetLife Stadium, November 16, 2014

This time last year, linebacker Chris Borland fulfilled a lifelong dream: getting drafted into the NFL. Borland went on to lead the San Francisco 49ers in tackles during his rookie campaign and emerged as a star in the making. But when the 2015 NFL Draft kicks off tonight, he'll be on the sidelines. Borland, 24, made headlines last month when he announced his early retirement. He cited concern for his long-term mental and emotional health as a result of football's well-documented link to traumatic brain injury.

Borland's action was both novel and compelling. Many injured players retire from the NFL every year, but what makes Borland's announcement unusual is that he was responding to risk. He was being proactive, not reactive. That suggests a growing awareness and acceptance of the link between football and brain disease. As both a health policy researcher and the mother of two athletes, I hope Borland's bold move will be a watershed moment for football, leading to better prevention and treatment of brain injuries. But watershed or not, the greater attention to brain trauma will be of little use if we consider it only an NFL problem.

Young athletes, for instance, experience head injuries at an alarming rate. A child goes to the emergency room for a sports-related concussion once every three minutes, according to the Youth Sports Safety Alliance (PDF). And that rate isn't driven only by young football players. Studies have found frequent concussions in soccer, ice hockey and lacrosse, as well. My son plays high school ice hockey and I worry about him getting hit. If he gets a concussion, he'll be at greater risk for many health problems, including depression and early-onset dementia. I have to worry about my daughter, as well, who plays recreational soccer. Data shows that female athletes suffer even more concussions than boys do (although it's unclear if girls are more susceptible or if boys are less likely to report).

Research I've conducted with my colleagues at RAND shows that brain injury is a serious problem among the nation's veterans, too. The Defense Department has reported that more than 320,000 service members have experienced a traumatic brain injury since 2000, including many who were injured during training or in noncombat settings. Our own studies found that nearly 1 in 5 veterans returning from Iraq and Afghanistan reports having experienced a possible traumatic brain injury during deployment. So identifying and treating brain injuries are critical issues for the Department of Veterans Affairs.

About 1.5 million people in the United States experience traumatic brain injuries every year, and more than 5.3 million are living with disabilities caused by those injuries. Despite the prevalence of brain trauma, we know surprisingly little about what causes it, how it affects us and how we can prevent it. The most critical key to answering those questions is data. And we need a lot of it.

Despite the prevalence of brain trauma, we know surprisingly little about what causes it, how it affects us and how we can prevent it. The most critical key to answering those questions is data.

First, we must collect more information about who experiences these injuries in various contexts — from youth football fields to men and women in combat zones — and with what consequences. Too often, the schools, leagues and agencies that manage the settings in which these injuries occur don't consider this type of research a priority, and there isn't enough funding to enable proper studies. But it's important for the health of our children, professional athletes and veterans that these institutions collaborate with researchers to track when and how brain trauma happens and to whom, so we can better understand what puts people at risk. That will allow us to engineer equipment and develop game rules that mitigate those risks. For instance, we don't know if it's safer for athletes in certain sports to play with helmets or without them. More data on how brain injuries are sustained in lacrosse and hockey would help us answer that question.

We also need more data on what trauma does to the brain. The NFL has devoted millions of dollars to improving the diagnosis and imaging of brain injuries. But the information that comes from that research needs to get to the hospitals, sports doctors, veterans agencies and others who are the first line of defense against concussions and their long-term effects. Concussions are notoriously difficult (PDF) for doctors to diagnose and far too many coaches fail to either recognize brain injuries or take them seriously. Delayed treatment causes longer recovery times and potentially increases the risk of long-term cognitive effects. While better imaging in the lab is a good start, we need better screening tools out in the field, too.

Finally, we need many more studies on the effectiveness of different treatments. Some of this research is underway now: The Departments of Defense and Veterans Affairs have developed a national action plan for brain trauma that details ways to reduce the number of veterans and military members affected by brain injuries and mental health issues. But we need a plan to ensure that health systems are providing the best possible care to athletes and others, as well. We don't yet know what therapies work the best — cognitive remediation, pain medication, or simply rest. And even though organizations keep promoting these treatments, we don't have the systematic evidence that they actually work. Health professionals need better, proven tools to ensure that they provide treatment that offers the most promise of full recovery. In addition to its focus on veterans, the federal government should establish partnerships with other entities that have the most at stake — namely the NFL, NHL and other major sports leagues — to create grants that back the critical research of brain-injury treatment.

During his announcement, Borland expressed concerns about our lack of knowledge about the risk, effects and treatment of brain trauma, saying, “It's like jumping into the water and you can't see how deep it is.” Many won't stop taking the plunge: Today's NFL draft, my son's next hockey game, and the continued combat deployments of the nation's military men and women are evidence of that. But with greater investment in research, we might get a lifeguard.

Terri Tanielian is a senior research analyst at the nonprofit, nonpartisan RAND Corporation.

This commentary originally appeared on Washington Post PostEverything on April 30, 2015, with the title, “NFL Officials Have Been Criticized for Ignoring Brain Injuries. But They're Not the Only Guilty Ones.”